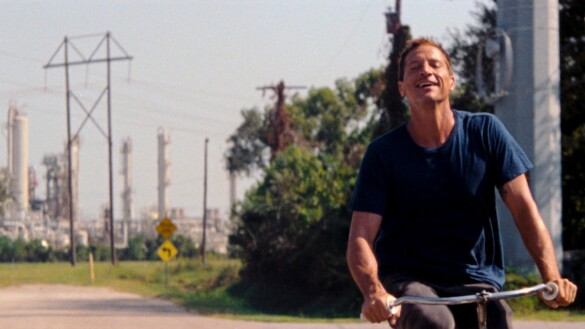 The films of Sean Baker are something to behold. He takes each of his stories to a different setting with a variety of characters that come off the street, sometimes literally with his creative casting in getting the right people he needs for every part. This time, Baker sets off to a poor town in Texas where Mikey Saber, a washed-up porn star, returns home after two decades away to regroup, except no one, not even his estranged wife, wants him to be around. While working in the form of selling marijuana, Mikey finds himself attracted to a seventeen-year-old girl working at a donut shop; despite the age difference, at age 17 in Texas, Mikey says she is, “legal as an eagle.”

Mikey is a narcissist and somebody no one would root for, but Simon Rex, who himself dabbled in porn before becoming an actor and MTV VJ, really hits the nail on the head as the sex-bragging Mikey. He arrives in town with a bruised face, having been scared out of California and taking the bus all the way to the one place he knows, a tiny house where his wife, Lexi, lives with her mother. Bree Elrod as Lexi and Brenda Deiss as Lexi’s mother are both suspicious and cynical when Mikey says he wants to restart his life. It’s understandable because Mikey had previously sworn he’d never return to Texas, but now he is back and still in his sex-driven ways.

As we follow Mikey using his charm to plead and deal through his way to making money for the return to California, he finds his romantic getaway in Strawberry, played pruriently by newcomer Suzanna Son. She goes to school, makes her money in this random donut shop, but also likes the older Mikey rather than the random boy she sleeps with. Their love and lust are equal, and even when Strawberry finds out about Mikey’s past, she still thinks of him as an attractive figure to be with. Even the gullible Lonnie, played by Ethan Darbonne, really likes Mikey and wants to really be his friend, but that turns into something of a mess as the film progresses.

In the trailer, we hear “Bye Bye Bye” by ‘NSync and the song is used throughout the movie, reflecting a time when Mikey was young and buff when beginning his porn career. This is in total contrast to the film’s setting in 2016 when Lexi and her mother are heard watching both the Republican and Democrat National Conventions with the voices of both then-candidates Donald Trump and Hilary Clinton being heard. Even the reference of Lexi’s mother using marijuana because her doctor cut down her painkiller medication explores the area’s rough surroundings; we even learn Lexi has engaged in prostitution to survive, showing how desperate it has become. And shows why Mikey left in the first place.

Yet, there are plenty of funny moments, those chunks of humor in the dialogue that Baker and his writing partner, Chris Bergoch, have consistently laid on with their blend of characters. In fact, this can be argued that it is Baker’s most daring project because of the strong sexual content and manner he made the film, shooting discreetly under COVID protocols and calling Simon Rex out of the blue (Rex says his sister became friends with Baker’s sister and exchanged numbers) to improvise an audition for the part. What you get is the high-standard character study that Sean Baker has always succeeded in bringing with unusual people in common struggles from daily life.