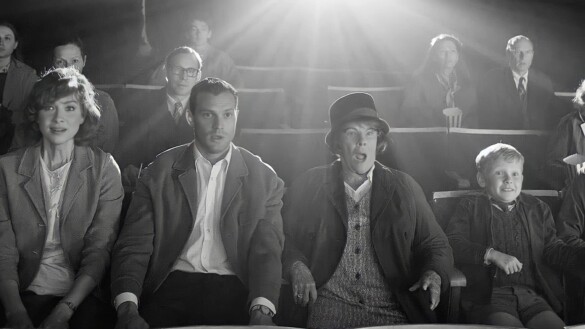 Synopsis: A semi-autobiographical film that chronicles the life of a working class family and their young son’s childhood during The Troubles in Belfast, Northern Ireland in the late 1960s.

Since its debut, the critics have hailed Sir Kenneth Branagh’s semi-autobiographical story as the front runner for Oscar glory. It’s something that hasn’t been attached to Branagh as a director since his four-hour epic version of Hamlet in 1996. After his last nomination for his performance in My Week With Marilyn, Branaugh has moved into starring and directing action-oriented films with the exception of the underseen All Is True as William Shakespeare himself. Now, Branaugh has taken his next film into the personal realm and away from the commercial side, he’s been doing the last decade with his hometown and The Troubles surrounding it.

Buddy, Branagh’s composite character, is played by newcomer Jude Hill, an innocent nine-year-old living with his parents and grandparents on a street that is suddenly disturbed one August day in 1969 by a riot between Catholics and Protestants. This is the beginning of a violent streak that lasts thirty years between the two religious factions, but people did not know this would be the norm in Belfast in 1969. Buddy’s home street is barricaded and he goes on as normal attending school, having his first crush, and engaging in hijinx with friends. Meanwhile, his father (Jamie Dornan) is working to pay off debts in London and contemplates with Buddy’s mother (Caitriona Balfe) of leaving Belfast with the dark clouds getting darker over the sectarian violence. Buddy’s mother is struggling with her husband away for a long time while working to shield the family from the chaos outside.

Buddy’s grandparents, played by Ciarán Hinds and Judi Dench, are the wit and wisdom of the film, talking to Buddy, who cannot and does not want to leave the only city he’s known. Both Hinds and Dench are the strongest performances, timely speaking amongst themselves as the cute elderly couple who still remember the old times before modernity came in. This is a family that is clearly a tight-knit group that stays and prays together, avoiding the politics outside of their home, although they are very aware of it with the news being shown on TV. Instead, they watch movies, exploring the sentimental feelings of movies like High Noon and Chitty Chitty Bang Bang when they were the moral tales of heroism or the escape they want from what is happening.

The sounds of Belfast in 1969 are authenticated by extensive sounds of ordinary life the characters walk through, as well as Belfast native Van Morrison’s two original sings being played at the beginning and the end of the film. Branagh even contrasts the city of then from now with an opening travelogue of shots in color before moving to black-and-white, courtesy of long-time cinematographer Haris Zambarloukos. They are snapshots captured in real-time and even watching an interview of the British Prime Minister being asked about the violence is not being copy-and-pasted onto the screen. The music is vivid, the charm is around them, and life can remain exciting regardless of the rumbling in other neighborhoods of the city.

With the childhood memory genre, directors who write stories based on their own lives are showing the audience their background and where they came from. Whether it’s Alfonso Cuaron’s Roma or John Boorman’s Hope And Glory, they are putting out their souls for us to explore because it’s these moments that make them into the person they are. For better or worse, this is what they are. However, instead of a deep exploration of the past, Branaugh gives us a postcard’s worth of plot in just 97 minutes and he does not put one foot wrong. The hype is real. This is the best film of the year so far.