Movie Review: ‘Ready or Not’ is the perfect way to end the summer 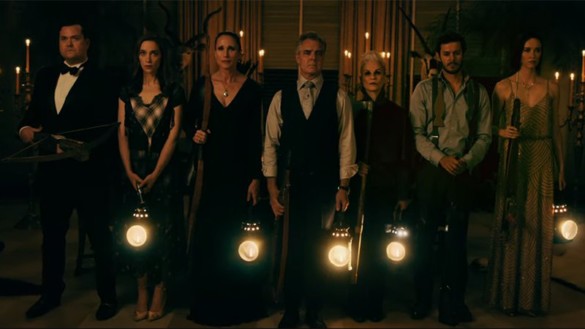 Synopsis: A bride’s wedding night takes a sinister turn when her eccentric new in-laws force her to take part in a terrifying game.

Horror-comedies are quickly becoming some of my favorite films. It takes the correct ratio of dark humor and scary bits, an intriguing plot, and the right cast to create a successful film in this genre. Ready or Not is the latest entry in this category and I think it’s a worthy addition. It tells the story of Grace (Samara Weaving) who is marrying Alex Le Domas (Mark O’Brien), an estranged member of a wealthy family who earned their fortune in board games. The Le Domas family has an odd tradition; whenever a member of the family gets married, the bride and groom must play a randomly selected game on their wedding night with the rest of the family. Unfortunately for Grace, she has to (unknowingly) play a deadly version of hide and seek which involves her new in-laws hunting her with weapons ranging from rifles, pistols, bows, even an axe. What unfolds is a horrifying, yet hilarious story of survival and family drama.

Samara Weaving is the true star of the show, no question about it. She is convincingly tough, has a relatable “I’m so done with this” attitude, and delivers her lines with perfect comedic timing. This is Weaving’s first real leading role and I foresee many more great performances from her. This cast is also stacked with plenty of fabulous supporting characters; my favorites being the alcoholic brother-in-law Daniel (Adam Brody), the very creepy Aunt Helene (Nicky Guadagni), and the intimidating father-in-law (Henry Czerny). Andie MacDowell is also wonderful as Becky, the Le Domas matriarch who just wants what’s best for her family. It was wonderful to see Adam Brody on the big screen again, I’m not sure what he’s been doing since his O.C. days but I’m hoping this is the beginnings of a comeback for him. He’s easily my favorite of the supporting characters. His snarky humor fit perfectly into the film.

In addition to its wonderful cast, Ready or Not has an interesting story that thankfully wasn’t fully given away by the trailers. Usually when I’m going to review a movie, I take notes so I can remember specific details or things that bothered me. But with this film I was so glued to the screen I didn’t write anything down. Ready or Not kept my attention from start to finish. I laughed, I jumped, I cringed, and even hid behind my hands once or twice. I had a few ideas on how I thought they would wrap things up, but all my guesses were wrong, and I was very happy about it. I’m not sure the ending is for everyone, but I loved it. I’m thrilled by all these newer films, especially in the horror genre, that feature strong female leads. Grace is a realistic character, put in a crazy situation, and her method of navigating it also seems realistic and relatable. She swears like a sailor, ditches the heels for practical shoes, complains about crazy rich people, and is overall, extremely unladylike in her gorgeous wedding dress. I love the switch from the “perfectly manicured damsel in distress” to badass leading lady. I know there have been strong female characters in horror films before, but I feel like films like Ready or Not and the Happy Death Day series are introducing a new, more relatable female lead.

I really have no complaints about this movie. The only thing I think might bother other viewers is the massive amount of gore and the plethora of F-bombs. It definitely earns its R rating. If I had to pick something wrong with Ready or Not it would be the casting choice for Alex Le Domas, the male lead / fiancé brining Grace home to the family. He wasn’t very likable and he had no personality. But in his defense, he had to share the screen with his wacky family members and all their quirks and drama.

Ready or Not is another solid film for 2019. It’s secured a place in my top five of the year and probably will stay somewhere around there. It was everything I wanted and more and gave me a new leading lady to watch out for. The fabulous Samara Weaving and her outrageous cast of supporting characters make this a unique film worth seeing. If you’re into the horror/comedy/thriller genre and aren’t easily bothered by gore and lots of bad language, then this is the film for you.