Movie Review: ‘Prisoners of the Ghostland’ is a Disappointing Outing from Sion Sono 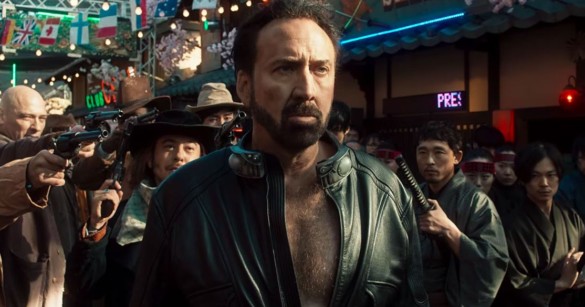 Synopsis: A notorious criminal must break an evil curse in order to rescue an abducted girl who has mysteriously disappeared.

Famed Japanese genre filmmaker Sion Sono directs his first English-language film in Prisoners of the Ghostland. Teaming up with acting legend Nicolas Cage and bringing the director’s usual brand of a hyper-stylized aesthetic and ultraviolent action sequences should’ve resulted in one of the most entertaining movies of the year, especially when you consider the fact that 2021 has been an incredible year resurrecting the long-lost art of genre cinema. Unfortunately, it feels surprisingly tame and restrained from the usual works of Sono, and even such an entertaining actor like Cage can’t make most of its haphazard material feel entertaining enough for audiences to care.

It starts pretty entertainingly, though, with Cage’s Hero robbing a bank with Nick Cassavetes’ Psycho. Cinematographer Sohei Tanikawa beautifully shoots the sequence. It perfectly establishes Sono’s tone right from the get-go, alongside another bonkers performance from Cage, going full Wild At Heart crazy. However, right after this scene, the movie’s pace slows down hard. It becomes a somewhat clichéd actioner, as Hero has to accept a mission from The Governor (Bill Molesley) to find his adopted granddaughter, Bernice (Sofia Boutella), trapped in the “Ghostland.” The Governor straps Hero inside a suit filled with explosive devices in the hopes he returns her safely, but our protagonist discovers the people of Ghostland and uncovers who The Governor is.

As an actor, Nicolas Cage has embraced his self-awareness as of late. He loves to bathe himself in the most ridiculous movies, and Prisoners of the Ghostland is no exception. Cage himself has called it “the wildest movie I’ve ever made,” and if by “wild,” he means losing one testicle from an explosive gadget and then yelling it out in front of a crowd in a ridiculous fashion, yeah, I’d believe it. But after seeing Julia Ducournau’s Titane at the Toronto International Film Festival, no other movie can be as wild as this. Some of the film’s action sequences are a tad wild, yes, but compared to some of Sono’s previous work, such as Why Don’t You Play in Hell?, Love Exposure, and Suicide Club, Prisoners of the Ghostland is the tamest wildest production Sono has ever done.

The action is expertly choreographed as always, and it’s beautiful to see Tak Sakaguchi going at it with his skillful samurai stuntwork. Still, it doesn’t feel as cathartic or as violent as what Sono is usually accustomed to. As a result, everything in Prisoners of the Ghostland feels underwhelming, from how the action doesn’t go above a standard R-rating to how Cage is utilized as a lead actor. In films such as Color out of Space, Willy’s Wonderland, or Mandy, Cage’s wild persona was used significantly. Still, he feels restrained, or should I say, uncomfortable with his character in Prisoners of the Ghostland. But there’s no reason for him to feel uncomfortable; the character is tailor-made for Cage to have the time of his life with. In some sequences, he’s relishing his role and delivers a performance that’s as iconic as some of his best work in Wild at Heart, Snake Eyes, and Face/Off. And then some of the most dramatic sequences don’t work at establishing emotional weight, where Cage and Boutella feel completely uncomfortable with what they have to work with.

The movie’s pacing falters its momentum as well, quickly dwindling any interest you may have in the film’s genre-blending concept. Sono throws way too many sub-genres of action at you: a post-apocalyptic Mad Max-esque thriller, alongside a Samurai flick with Western sensibilities, that, as a result, doesn’t know what it wants to say. Granted, there are few visually exciting sequences in the movie. Still, they’re so sparse, with the movie filling itself with drab and cyclical scenes where Hero interacts with the prisoners of Ghostland that lead to absolutely nowhere, that it’s hard for us to start getting fully invested in the movie.

It’s a damn shame because Sion Sono is one of the most exciting genre filmmakers working today, who continues to push the bar of catharsis to deliver an exhilarating film experience every single time. But Prisoners of the Ghostland lacks any excitement and catharsis that made Sono the filmmaker he is today. And while Cage, Boutella, Cassavetes, and Moseley have some sparse fun, it isn’t enough for me to recommend it to anyone. So if you haven’t seen Love Exposure yet, do it now. That is all.