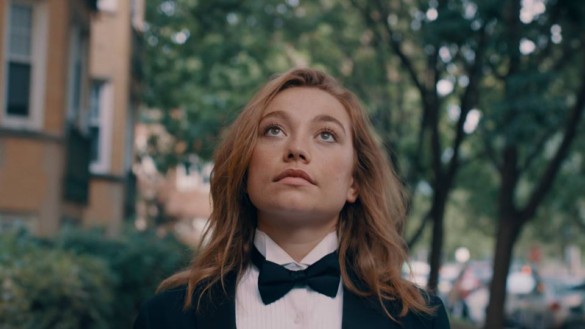 Synopsis: Eager to escape life with her depressive single father, 16-year-old athlete Cyd Loughlin visits her novelist aunt in Chicago over the summer. While there, she falls for a girl in the neighborhood, even as she and her aunt gently challenge each other in the realms of sex and spirit.

Sometimes the most naturalistic approach to filmmaking, whether that be in a respective film’s performances, its direction, or its writing, is driven by a lack of physical conflict. Instead, conflict remains internal, an introspective one, the way a teenager evokes confusion rather than agitation. This describes Stephen Cone’s approach to writing and directing Princess Cyd, in the attempt to keep things simple and grounded even when family members remain at odds with one another. More importantly, however, this naturalistic approach describes Jessie Pinnick’s performance as the titular character, in one of the year’s best and most hypnotizing performances. If the film itself doesn’t always work, just call me a sucker for conflict-less films; who needs conventional conflict anyway?

Princess Cyd is a rather lovely film that challenges the varying viewpoints between the innocent and the experienced. Teenage Cydney, having dealt with a tragedy at a young age, goes to live with her aunt Miranda, an established novelist in Chicago, who still resides in the home her and her sister (Cydney’s dead mother) grew up in. She also still lives alone, a crucial component to her emotional arc. Cyd and Miranda couldn’t be more different, but their dichotomy surpasses that of just typical jock vs artist. Their varying beliefs are a combination of inexperience but also experience, in which their “arguments” range from religion to sex. But thankfully, it’s never antagonistic, a most refreshing feat; instead, we witness two distant family members get to know each other again by challenging one another, and they both likeably and openly welcome the challenge. Both Cyd and Miranda are instantly sympathetic.

Much of that is also due to the film’s two leading ladies. Rebecca Spence as Miranda has quite the credibility among her writing community as a successful author, and it’s something she rightfully takes pride in; and yet, isolation haunts her. She lives alone (as I stated above) but also shows an interest in the lives of others; she writes stories about other people, and it seems clear that this middle aged adult still hasn’t quite grown up and experienced yet. This confusion is reverberated by Cyd, but more innocently; her sexual confusion is palpable and erotic, but ironically (and much like Miranda) she resists the need to experience due to a past tragedy. Cyd chooses to close herself off, and there’s genuine pain in her without having to have Jessie Pinnick say a thing. As I stated up front, Pinnick gives one of the year’s best performances, with a hypnotic presence that gives dialogue to a simple wordless gesture. I simply couldn’t take my eyes off her.

It’s pretty clear who Stephen Cone is influenced by; Princess Cyd chooses to sidestep conflict in the same way Richard Linklater would through natural conversation. He also deconstructs the human condition in the way he physically stages his characters, much like the late and great Jonathan Demme. And to be honest, the script doesn’t always work; it rushes the romance that forms between Cyd and Katie, played by Malic White (which is unfortunate as she too is really good here), and Cone’s attempt to avoid physical conflict can lead to plenty of contrivances and artificiality. But if conflict is what you want to avoid, I admire that, and Jessie Pinnick makes it real when it counts.