Movie Review: Nature aligns us all in the documentary ‘Jane’ 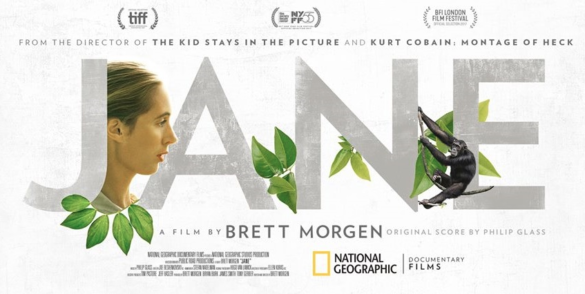 Synopsis: The life and work of the renowned primatology scientist, Jane Goodall, especially on her research about chimpanzees.

A woman who had the ability to communicate with another species. Could Brett Morgen’s Jane by the year’s best superhero movie?

Produced by National Geographic, Brett Morgen’s documentary on the African adventures of Jane Goodall is as cinematic as any adventure film you’ll see this year, a classic origin story through and through. Piecing together what was thought to be lost footage of Goodall’s Tanzanian quest, Jane flows like an actual movie, with a narrative that moves so effortlessly with a clear beginning, middle, and end. Morgen, who directed the better of the two Kurt Cobain documentaries from 2015 (Montage of Heck), should really be applauded for giving this experience such a rich pathos and a clear thematic focus. Never has a documentary felt this epic in scope, yet with such a seamless narrative progression.

Jane Goodall herself was a merely simple, yet adventurous human being, whose high spirits and open-mindedness landed her the opportunity to live with the chimpanzees in the Gombe; she was a mere secretary at the time for archaeologist Louis Leakey. Leakey believed that the study of great apes would provide a link to human evolution and ancestry, and asked Goodall to take charge in those studies, solely because she did not have the education or scientific background; she didn’t even have a degree at the time. Leakey wanted a no-biased approach to this study, and Goodall was the perfect fit. Having always been passionate about animal life in Africa, how could Goodall say no? Thank goodness she didn’t.

Seeing Goodall progress from outsider to observer to coexistence is the film’s biggest emotional draw. Soon after, Jane provides names for her chimpanzee subjects, such as David Greybeard, and devoted mother Flo and her children, in particular newborn son Flint. The character building around the chimps themselves is so well established, this may as well have been yet another entry in the Planet of the Apes franchise. And in watching them, we as the viewer witness love, curiosity, companionship, selfishness, and protective instincts; sounds rather human, does it not?

It’s no surprise why Jane herself found such a fascination with Flo specifically, especially around Flint’s clingy relationship with her. As we witness this relationship between mother and son (which crystalizes in one of the year’s most heartbreaking sequences), Jane too sees the parallels to human behavior. At this moment, Jane had already married photographer and colleague Hugo van Lawick and birthed a son named Grub, and to see such parallels between Goodall’s own duties as both wife and mother when compared to her animal subjects is the film’s most endearing and human attribute.

It’s not just Goodall’s ability to communicate with another species that made her superhuman, but her courage to share that communication to the world, which gives the film’s final minutes on the importance of global communication such thematic purpose. But it’s also her humanity, her ability to acknowledge her sense of caring but also her selfishness; keeping Grub around with her in Africa may have been for her own selfish reasons, but realizing his eventual need for proper schooling is arguably counterbalanced in selflessness. Perhaps as a family they didn’t always work out, but neither does the African wildlife. Nature has a way of aligning us all, and Jane Goodall knew it. This is one of the year’s best films.