Movie Review: Play ‘Jumanji: Welcome to the Jungle’ for some Riot & Roteness 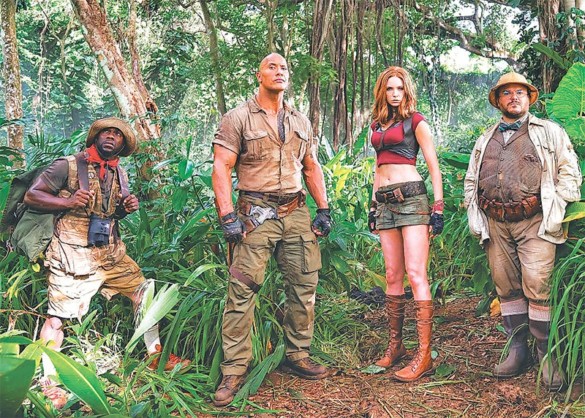 Once in a while, the planets align and give us something we want least — like a sequel to Jumanji. Not that the 1995 film ends with all its doors closed, though it’s an acceptable vice to be blind to what transpires when Francophones roll the dice. But Welcome to the Jungle is real and is here, and while it doesn’t bore the unevenness in its party tricks renders it inferior to that time the jungle comes to New Hampshire. Had the film actually been a game, it will be a production from Ubisoft in 2014 and EA in recent times.

Presumably provoked after a jab at board games in the opening sequence, writer and illustrator Chris Van Allsburg’s hazards-aplenty tabletop transforms into a 16-bit video cartridge. Four high-schoolers come across it during detention, not accidental of course due to the drums, and two button presses later they become the character they chose — lanky brainiac Spencer (Alex Wolff) is now the perpetually pumped Dr. Smolder Bravestone (Dwayne Johnson), NFL prospect Fridge (Ser’Darius Blain) is two feet removed height-wise being zoologist-slash-moving inventory Moose Finbar (Kevin Hart), selfie-aware Bethany (Madison Iseman) bids adieu to her runway-bound attributes as the plump cartographer Sheldon Oberon (Jack Black) and mostly diffident Martha (Morgan Turner) struggles to adapt to the Lara Croft-esque appearance — midriff-baring, proficient at butt-kicking — of Ruby Roundhouse (Karen Gillan). After fleeting lessons on “cutscenes” and “non-playable characters,” or clunky reminders that the setting is a video game, the teens and their avatars are tasked with lifting a curse blanketing Jumanji after the literal insect-magnet Russel Van Pelt (Bobby Cannavale) has acquired a sacred jewel.

Van Allsburg’s picture book is no haute literature, but the film adaptation manages to overcome its mainly-kids-go-hurrah premise with endearing performances from its grown-up leads — especially Robin Williams — set pieces exploiting the wonders of cognitive dissonance. Welcome to the Jungle has neither; stiltedness mires the design of the five-man screenplay’s emotional outreaches and the many effects are wreaking havoc in their rightful playspace. On its own terms, the gags have this annoying tendency to behave like Mario Kart‘s Item Boxes, tolerable one moment (gaming lingo, riffing on avatars’ attributes, Hart’s height) and terrible the next (uninspired penile humor, the swearing-equals-badass routine), and the action’s scope noticeably decreases in size as it goes on. At least a solid cast with solid comedic chops is assembled here. Johnson and Hart is Central Intelligence redux, yet there’s still life in that; Gillan surprises by always arming herself with a spark as she distracts and dance-fights intimidating non-playable characters; Black is deliriously amusing as the vessel of a Plastic soul, and the farther he is from Baywatch-levels of obsession about anatomy the better. That’s a plus. Ish.

The celebrity is here either because director Jake Kasdan is a cast member short, screen-testing for the film version of Uncharted (Heaven forbid), or just to further beautify the frame. Today’s gaming generation would go all in on the third theory; it fits their visual-first tenet as well as the pulsating works of production designer Owen Paterson, d.o.p. Gyula Pados and composer Henry Jackman, who most notably scored the fourth Nathan Drake adventure. Now that we’ve mentioned it, the editing in the cutscenes of this Sony game — Spencer’s room, seen in the film’s beginning, is basically a mini PlayStation Experience event — is more filmic than what editors Steve Edwards and Mark Helfrich had done in Welcome to the Jungle. Despite building the narrative around and regularly waxing lyrical about cooperation, the choppy style ensures the idea remains obscured. It also forces the adventure to barrel rather than walk toward its conclusion, and from that we find Jumanji 2.0 does satisfy one thing on our wishlist while watching this after all.