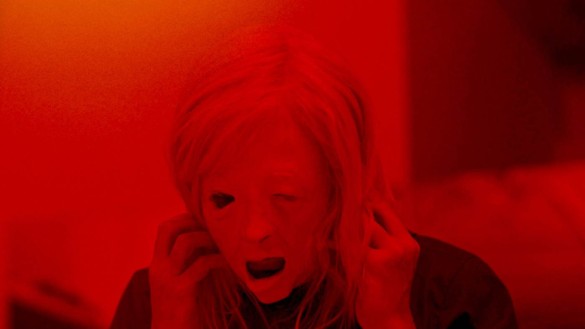 There’s a lot to love in Brandon Cronenberg’s Possessor. It packs a punch with sudden spots of violence, while also capturing mental deterioration in an inventive, unnerving way. The film follows Tasya (Andrea Riseborough), an assassin whose consciousness is implanted into a hapless host for her to use their body as a murder weapon. But when she finds herself in the body of the unstable Colin (Christopher Abbott), she finds herself leaning into his life more than she’s supposed to, and separating her mind from his body proves a complex challenge. The warring identities battle for dominance in a pulpy genre flick that indulges in its creepy, bloody thrills without sacrificing unsettling and lasting questions of identity.

The influences of the director’s father, horror legend David Cronenberg, are obvious in Possessor, but Brandon effectively asserts his own cinematic style that feels much more clinical and polished than his father’s early films. The violence in the film is at times extreme, but it’s also visceral, short bursts of horrendous bodily harm that always feel real and affecting.

It’s also worth noting that the violence is always rooted in genuine emotion. After a stylish opening showing Tasya on a job, Cronenberg slows the film down to let the audience become more familiar with her character. We see her practice what to say to her estranged husband and child before she arrives at their door, showing us that even though she wants to be more present in their lives, her warmth towards them feels a little performative. She finds it difficult getting close to people when she spends most of her time in other people’s bodies. By the time she’s inhabiting Colin, we can tell she’s enjoying being him on more than a purely professional level.

This conflict is portrayed well by Abbott, who mixes the quiet, nervous energy of Tasya with the numb impassivity that characterizes Colin. Occasionally Tasya’s body will replace Colin’s in shots to emphasize how dominant the former is over the latter’s mind, a technique used most effectively in a sex scene between Colin and his fiancé Ava (Tuppence Middleton), who is one of Tasya’s targets. Tasya, by constantly shifting from one body to another, has eroded her own identity, making it easy for her to attach herself to those she continually inhabits. When Ava’s rich father, John (Sean Bean), humiliates Colin at a party, we see the hurt across Colin’s face – even though Tasya is the one controlling his reactions.

As the film progresses, we’re treated to a kaleidoscopic unwinding of psyches, shown through drawn-out spells of flaring lights and distorted images. They’re undeniably creepy, and effectively transmit the growing lack of control Tasya is having over the brain-transplant technology. As the battle for mental autonomy wages, it can be confusing trying to work out whether it’s Tasya or Colin in command of the host body, but credit has to be given to Cronenberg for letting the subtleties of the actors’ performances inform who is the dominant or submissive identity.

The film’s major turning point comes in the second half, where the consequences of Tasya’s exhilarating and addictive life of body-snatching are forced onto her. The last act takes on the exact same feeling as being unable to wake from a bad dream. As it lurches towards the end and the film turns more to the internal, personal conflict, Possessor loses its focus a little, and its gripping tension starts to slacken. But Cronenberg turns his lens onto exploring what individuals who have had everything taken away from them are capable of, as well as touching upon who is culpable for actions committed by those, not in full possession of their mental faculties. At once viscerally entertaining and carefully disturbing, Possessor transcends its corny, ridiculous premise to give an upsetting sci-fi thriller that will stick with you like an infection. It is schlock manifested in a sinister, surgical way.