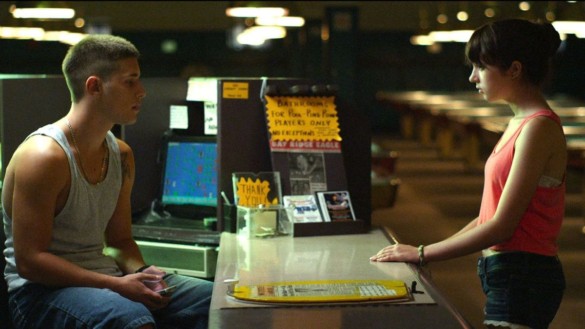 We are back on Criterion Crunch Time with another film leaving Criterion Channel at the end of the month. While it is October and they have added a bunch of horror movies (seriously, do yourself a favor and find some terrifying gems), lots of interesting films are never to be seen again. This brings us to a rising star director, Eliza Hittman. I chose It Felt Like Love for selfish reasons. Her other two features, Beach Rats and Never Rarely Sometimes Always are both, in my opinion, stone-cold instant classics. It Felt Like Love is her first feature and I felt that I owed myself a viewing of where her career began. Would it be underwhelming? Would it be just as good as the other two? Well…

It Felt Like Love focuses on Lila (Gina Piersanti) who, on some levels, is going through what we all do as a young teenager. During that age, sex is something we want, but it is also a horrifying prospect, full of risk, danger, and the absolute unknown. To make matters worse, she is faced with her best friend Chiara (Giovanna Salimeni), who not only has a steady boyfriend but is drastically more experienced than Lila. This added pressure pushes Lila to make some, let’s say, questionable choices.

Watching this movie out of order in Hittman’s career likely does it a disservice. In some ways, It Felt Like Love is a combination of her two later films. It contains the discovery and fear of Beach Rats with the uncomfortable closeness of Never Rarely Sometimes Always. Unfortunately, the screenplay, also by Hittman, lacks the pacing and punch of those films. It should be noted that Hittman wrote those as well, so she obviously grew as a screenwriter and a director. One can accuse It Felt Like Love of feeling like a sizzle reel that lacks cohesion.

But what a sizzle reel! Hittman and cinematographer Sean Porter (Green Room, 20th Century Women, Kumiko The Treasure Hunter) band together to create something truly memorable. There are movies about sex that come out every year, but most of them are afraid to be sexy, to be intimate. You may not level this complaint at It Felt Like Love. Hittman and Porter make the decision very early on to use uncomfortably close camera angles to demand you feel the power and terror of intimacy. This begins with close-ups of two characters holding hands, without dialogue. By making this choice, the connection between Lila and Chiara is palpable, as only the friendship between teenage girls truly can be. As the movie progresses and sexual activity is shown on screen, similar tactics are used. When Chiara and her boyfriend, Patrick (Jesse Cordasco) share an intimate moment, we are given views of backs, legs, and arms, simultaneously showing the passion and awkwardness of early explorations of sexuality. One of the positives of the script is Hittman’s detailing how boys and girls of that age are treated differently. Patrick’s insecurity regarding Chiara’s experience (a whole 3 people!), is weaponized as an insult to her. The pain on Salimeni’s face is focused on just enough for us to feel it without it delving into melodrama.

But, if anything, Lila’s journey is even more dangerous and mortifying. She, after a brief introduction, develops a fixation on Sammy (Ronen Rubenstein) who happens to be an ex of Chiara’s. This older guy also has the reputation of sleeping with anyone who shows a hint of interest. This is a rarity, a male character who is mostly an object. Lila’s focus on him is not about being in love, not about Sammy as a person, instead, it begins as a means to end. A way to lose her virginity, and nothing more.

Of course, it is not that simple. Her desires aside, Lila is still a young girl in a patriarchal society. Men, in general, are terrible and predatory. Though Sammy is a little more polished than his friends, he is no knight in shining armor. Lila is certainly not perfect, she even tries and fails, to convince Sammy that he drunkenly slept with her. However, all of this pales in comparison to this college-age boy allowing Lila to put herself in dangerous situations. Despite her protestations, it should be clear to anyone that Lila is acting like an experienced possible sexual partner. He constantly challenges her to go further, sometimes with nothing more than silence and a piercing stare. This all culminates with a nearly shaking young girl, on her knees in front of three men. Again, Hittman and Porter’s camera work focuses closely on Piersanti’s face, her eyes not daring to look up at them for an excruciatingly long beat. In this moment, and in many others, Lila, even when surrounded, is alone. No one is supporting her, not Chiara, not her well-meaning single father (Kevin Anthony Ryan), and certainly not these horrific men.

So, to return to the work of Eliza Hittman in comparison, the bar was high before sitting down to watch It Felt Like Love. And while it does not clear that bar, it was still worth watching. If you want to see the beginning of a career that will likely have a meteoric rise in the independent film world, it is still incredibly impressive from the very start. Of course, both Beach Rats and Never Rarely Sometimes Always are vastly better films, but this still shows off the immense talent of Hittman and it deserves to be watched before the end of the month!

Join us next week for the last movie of the month, Uncle Boonmee Who Can Recall His Past Lives!