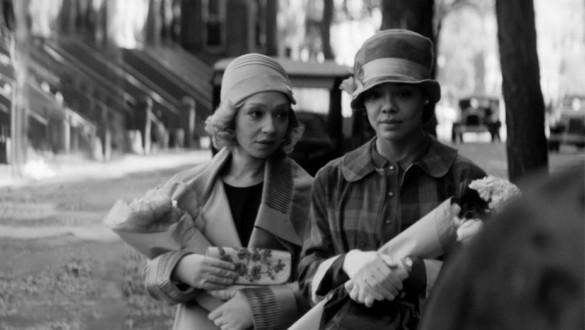 Synopsis: Two high school friends have an unexpected reunion. This renewed acquaintance ignites a mutual obsession that threatens both of their carefully constructed realities.

Rebecca Hall has made the jump from actress to director and writer with the atmospheric and sober adaptation of Passing, originally written by American author Nella Larsen. As Hall has stated, this novel got her attention in her mid-twenties as she discovered her own family’s history of crossing the color line between races. This practice, known as “passing”, is at the center of her directorial debut, although the movie quickly evolves into a story of suspicion, equally fed by feelings of jealousy and fascination between the women of the story.

Passing focuses on Irene (Tessa Thompson) and Clare (Ruth Negga), two African American women that find each other again by chance in the New York City of the 1920s. Friends during their school years, they lost touch as they went to live vastly different lives. While Irene remained in Harlem and married a doctor of her own race, Clare started passing as a white woman, marrying a white and deeply racist man, and enjoying her new social status. Now that they see each other again, a new relationship blooms defined by restraint from Irene and a desperate need of connection from Clare.

Hall created a deeply sober and self-serious movie with her debut. Every frame and detail are carefully constructed to create images and sounds that are beautifully calculated. With a 4:3 aspect ratio and black and white cinematography, the movie has the feeling of an ancient film, something that would be easily seen in the era in which the movie is set on.

More than a vintage seal, though, these decisions help the story and the message. For example, the cinematography by Edu Grau allows us to focus more on the social judgments within the story instead of the possible conclusions that the modern observer can draw. At the same time, Grau’s lens seems to be in love with its subjects, often admiring Thompson’s and Negga’s faces, feet and hands with close-ups and luminous shots. Specifically, this private eye is the one that also creates a certain sensual feeling between the women.

The detail and the effort to create something visually stunning are undeniable. The costumes designed by Marci Rodgers are breathtaking, enhancing the beauty of both actresses and shaping the allure they produce amongst those that surround them. The production design by Nora Mendis becomes a vital element of the story. The house in which most of the action takes place becomes an important feature, sometimes exuding a chilly feeling of a gothic narration. The score by Devonté Hynes is subtle and elegant, with the piece “Homeless Wanderer” by Emahoy Tsegué-Maryam Guèbrou appearing constantly throughout the film.

In this respect, Hall plays with the tone of the movie. Sometimes it is sensual, other times it inspires terror and suspense, and some others it just idly admires the atmosphere and the actors. Although exquisite, sometimes the story is completely lost for the sake of visual appreciation.

While the topic of passing is the mechanism that starts the story, it is not the one that defines it. Rather, the women develop a complex and challenging bond that makes them question their own decisions. While Clare regrets the life she created as a “white” woman more on the basis of boredom and isolation than on the questioning of her identity, it is Irene who suffers the most.

As Clare spends more time with her and her family, it becomes evident that Irene knows little about life and race, always living in mental isolation. In consequence, the tension with her husband Brian (André Holland) becomes unbearable, who is deeply affected by the racist remarks that are directed towards him and their children on a growing basis. Maybe it is fateful timing, but this friction becomes more evident once Clare’s appearances become more frequent, affecting the relationship between the women. Nevertheless, Hall is not worried about giving us easy answers, instead focusing on Irene’s assumptions, easily read in Thompon’s gestures.

While the story may feel inconclusive at times, the acting is homogeneously satisfying, proving that the movie is perfectly cast. While the supporting cast is memorable and fascinating with the faces of Holland, Alexander Skarsgård as the troubling husband (once again), and Bill Camp, the film is completely immersed in Thompson and Negga. While Thompson is judgmental, stern, and in complete control of herself, Negga is fragile, charming, and superfluous. And yet, the glances shared between each other hide unknown secrets and feelings that are never shown on screen.

An ending that is deeply unexpected, but completely gratifying, makes Passing a remarkable directorial debut. With this feature, Hall proves to be an interesting eye not only behind the camera but also as a writer. Her sensibility and perfectionism can be seen in every layer of the movie, which, although imperfect, is completely captivating.