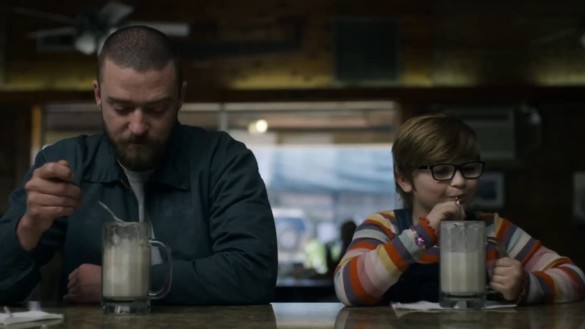 Synopsis: An ex-convict befriends a troubled young boy and both grow as a result

Based on his pop star persona, I would not normally expect to see Justin Timberlake playing the role of a gruff, recently imprisoned tough guy in rural Louisiana. But in Palmer, Timberlake reaches back to his Tennessee roots to do just that. Donning a ballcap and a full beard, he brings the goods for the beginnings of a deep character study. Unfortunately, the plot he’s working with is weighed down by familiarities, keeping the film from reaching its full potential.

Timberlake plays Eddie Palmer (he just goes by Palmer), who returns to his hometown after a 12-year prison sentence for a violent crime. He lives with his grandmother Vivian, played by the always great June Squibb, who demands that he go to church and work to turn his life around. She rents a trailer home out to a drug-addicted woman named Shelly (Juno Temple) and her young son Sam (a breakout role for Ryder Allen). Vivian takes it upon herself to take care of Sam when his mother is incapacitated, leading to bond between her and the young boy.

Sadly, Squibb’s time on screen is short-lived, as her character passes away early on in the movie. Though she did not have custody of Sam in any way, this leaves Palmer with a sort of inherited responsibility to care for the boy after Shelly suddenly leaves town. Though Palmer is initially hesitant to have anything to do with the child, as we’ve seen so often in films of this sort, he grows to see how Sam brings out the best in him, and others. He also feels a duty to protect Sam, as the boy does not conform to traditional gender roles, and is often faced with prejudiced ridicule as a result.

Without giving anything away, I would venture to say that most could probably guess how most things in this film turn out, based simply on the plot description. This is where my primary issue with the film lies. That’s not to say that a film has to be wholly unpredictable, but there’s little to distinguish this movie from others like it. It’s the story of a man seeking redemption for the mistakes of his past and/or making a life adjustment, and his relationship with a child is used as the catalyst for that. It just feels like the base of the film is heavily recycled, even if there are discernible differences between this and films like Gifted, The Game Plan, or a collection of sports films about a hot-headed man leading a group of youth (Palmer was a former football star with a scholarship to LSU, by the way).

What does help this film to stand out is the performances. Timberlake does do some of the best work of his acting career here. In a strange way, it almost feels like he’s channeling the best we’ve seen of the Affleck brothers. Palmer at first seems to feature the deeply quiet nature of Casey in Manchester by the Sea, while also taking on the hard-drinking, troubled nature of Ben in The Way Back. It helps that these films also have some strong similarities. That said, the first two are better performances in better films (much better in the case of Manchester), even considering the off-screen issues of the Afflecks.

It is undeniable that Timberlake has strong chemistry with his co-star, Ryder Allen. The young actor delivers a remarkable performance, despite a screenplay that sometimes feels as though it’s trying too hard to capture how children talk. The role feels very lived-in, and the character radiates positivity. Perhaps the biggest point of success for Allen’s performance is that he makes it so easy to see why his character warms Palmer’s heart. I only wish the film had a better grasp on the character’s identity and what it means in this film’s context. Here we have a character who does not conform to societal expectations for young boys. And aside from some scenes of bullying here and there, including from adults, the film never deeply explores what that means for a character growing up in rural Louisiana.

Such an exploration may have helped to reduce another issue of the film, which is that it simply tries to do too much. In addition to serving as Palmer’s redemption tale, the film puts its surface-level look at the livelihood of Sam alongside themes of gender, loss, drug addiction, love, custody, and especially masculinity. It tries to dip its toe in all of these areas, while director Fisher Stevens might have found more success by focusing on a few major themes and fleshing them out more. Rather than getting that, we get aspects of the film that just feel thrown in. These include a romance between Timberlake and Alisha Wainwright, who plays Sam’s teacher, and a very inadequate and stereotypical portrayal of Juno Temple’s addict character.

And yet, despite all of its narrative shortcomings, it’s difficult to avoid being charmed by Palmer. Many of the high points of the film come when we are alone with Palmer and Sam, as their bond grows to something special. Take a scene in a diner where Palmer treats Sam to his very first root beer float. As the two converse, we see Palmer begin to take on his own fatherly style while witnessing the two truly enjoying each other’s company. Though Palmer is pretty much the definition of hypermasculinity, he grows to love Sam without wishing to change him. Granted, even this aspect is problematic at times, especially a scene in which Palmer answers Sam’s question about what “queer” means by replying that it means “different,” and trying to relate it to its own experience.

Palmer is a film that you come to for the heartfelt relationship and the strong work from the two lead actors, rather than the way it tries to take on deeper themes. It comes off as one of those films that isn’t as progressive as it tries to be, but it does feature plenty of sweet moments that many viewers may find tear-jerking in nature. At the very least, this story of child custody keeps it pretty light on the legal scenes, which was a welcome change. I was able to enjoy the film throughout while still recognizing its flaws, so it’s not one to be fully dismissed.