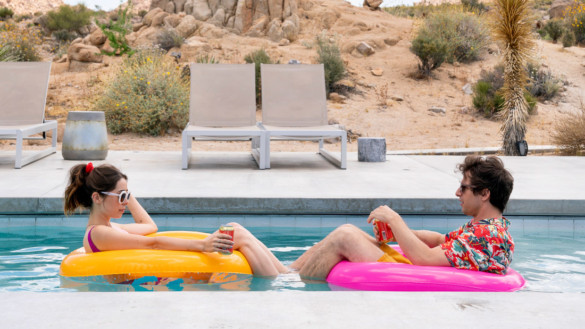 Synopsis: When carefree Nyles and reluctant maid of honor Sarah have a chance encounter at a Palm Springs wedding, things get complicated as they are unable to escape the venue, themselves, or each other.

Palm Springs had me from the get-go when it co-opted the Sony Pictures Classics title card to say Lonely Island Productions instead. I live for that style of cheeky reverence, especially in an indie rom-sci-fi-com. And, on its surface, Palm Springs sounds like a movie that’s bound to play out like one big shameless homage to the Harold Ramis flick that wrote the blueprint for this mode of narrative flow. But it wisely doesn’t do that. It forges its own funny path. With his directorial debut, Max Barbakow puts a fresh spin on the “time loop” story model that has been replicated in film and on television for decades.

Time loops are practically a staple of genre storytelling at this point. In fact, you are not true a sci-fi/fantasy show until you’ve done a time loop episode; I’m sorry, I don’t make the rules. I mean, it’s practically a rite of passage. Doctor Who, Buffy the Vampire Slayer, Supernatural, The X-Files, Fringe, Farscape, Stargate SG-1, Xena: Warrior Princess, several Star Trek series, and too many more to name have put their characters in the precarious predicament of repeating the same day over and over again until they eventually deduce a way to break the cycle. Then, of course, on screen there’s… Groundhog Day, starring Bill Murray in one of his signature roles. The moment Palm Springs dropped on Hulu, the internet quickly became flooded with assertions that Palm Springs is a Groundhog Day rip-off. But, no, it’s not. The comparison is not unfounded, mind you. But bare premise aside, Palm Springs and Groundhog Day are two fundamentally different films.

Bill Murray’s Phil, once he’s accustomed to his newfound situation, takes full advantage to great comedic effect. He indulges, lives extravagantly, and it’s only once he falls in love with someone who cannot love him back that he’s driven to find an exit. To Phil, it’s all fun and games—until his arc reaches that unavoidable dark night of the soul moment. And we as the audience see the beginning, middle, and end of his journey. When we meet Andy Samberg’s Nyles, however, he has already been doomed to repeat the same day for an unspecified but undoubtedly very lengthy period of time. No matter what he does, no matter what he says, he is also condemned to wake up every day the same way and start all over again. The novelty has long faded; his life is essentially meaningless. Nothing he does breaks the cycle. So he entertains himself by being as publicly weird as possible—for the shock value, to feel something. And what better place to do that than at a wedding where you hardly know any of the attendees? Nyles, behind the goofy demeanor and lackadaisical grin, is incredibly unhappy. He has sunk into a pretty profound pit of nihilism and self-pity. It’s no mistake that we only ever see him drinking alcohol. For one thing, he will incur no physical consequences for his excessive drinking. For another, getting soused numbs the pain; it’s self-medication. Because Nyles is deeply depressed. And Andy Samburg plays the 40-year-old crestfallen guy putting on airs quite well.

Lonesome, Nyles moves about each day among the same group of people, most of whom have no idea who he is and even fewer recognize that he’s in anguish. Naturally, no one knows that he’s trapped in a time loop—how could they?—but the point remains that Nyles has become adept at masking his misery. Nyles, in a sense, has nothing to live for. Nothing he does today will matter tomorrow. Because there is no tomorrow. So he’s forced to exist every day among a bunch jolly wedding-goers for whom this is one of the happiest days of their lives. Every day. Every day. Every day. Occasionally it seems as if he might not even be aware of his own mental state. And perhaps he’s not. That’s the tricky thing about depression: it wears many faces, and some are so convincing that sometimes the wearer can be fooled, too. The immense sadness at Nyles’ core is not immediately apparent, since screenwriter Andy Siara cleverly chose to begin this story not with Nyles’ first wake-up in the loop but rather with what could be his thousandth. Or millionth. And denying the audience that part of the formula fundamentally alters the equation.

Siara also alters the equation by lassoing another character into the loop. In Groundhog Day, it’s just Phil. But not in Palm Springs. With Cristin Milioti’s Sarah, we are given that first wake-up and that coming to terms with the terms of this world—and feeling that instant need to escape this godforsaken wedding day that neither of them wanted to attend in the first place. It’s a nice juxtaposition to the cool yet sad Nyles’ been-there-done-that-don’t-bother attitude. The funny thing about Sarah’s situation, though, is she entered the loop already somewhere on the depressive spectrum, as we learn slowly as the story unfolds, but, unlike Nyles, for her this quandary of quantum physics acts as a blast of determination. Cristin Milioti proves here that she’s worthy of being our next great leading lady star. She has a wicked sense of delivery and manages to be charming while playing a deceptively gloomy character.

The supporting cast are not to be overlooked, either. J.K. Simmons is definitely a standout. He brings a chaotic and reasonably terrifying energy to the movie as the quasi-villain. And in the most hysterical way. Simmons is a talented character actor, who manages to elevate just about every project he’s a part of, even when the project is already top-tier. Then there’s Dale Dickey, who does not get enough credit in general. This trailer trash goddess has been gracing our televisions for years, and the fact that she’s not a household name (or an Oscar nominee for Winter’s Bone) is, to put it mildly, a crime against humanity. And Dickey is undeniably fabulous here as an edgy biker mama and sexual supernova. Perhaps the most unsung hero of the film, however, is Meredith Hagner. She expertly plays Nyles’ nightmarish girlfriend Misty, a thankless part that she adds layers of richness to. Hagner demonstrates enormous command over her voice and facial muscles for the utmost comedic effect.

There’s certainly a hidden gravity to the film, a low-key melancholy. But nonetheless Palm Spring is absolutely a comedy, albeit a dark one—ironically set in sunny paradise. Samburg and Milioti bring the humor, even when the material leans to the solemn side for a bit. Under Max Barbakow’s keen direction, Palm Springs leapfrogs from hilarious to heartfelt to ridiculous to tender to whimsical to woeful and back again. It’s very sneaky about how it shifts from beat to beat. Narratively, the film is pretty well constructed. Stories dealing with the somewhat complex issue of quantum physics cannot be done on the fly. Siara must’ve engineered his script impeccably.

Has the premise been done before? Yeah, sure. But is it like all the others that came before it? No, not really. So, reducing Palm Springs to nothing more than a Groundhog Day rip-off is not only doing a disservice to the filmmakers, but, as a take, it signals to me that the critic is viewing the film through a myopic lens and can’t see the unique themes Palm Spring is exploring, nor the clever techniques the filmmakers have employed to rekindle a story type that can so quickly become hackneyed and stale. Palm Springs may fit the mold of an often-done sub-genre of science fiction, but it manages to tell its story smartly—without feeling like a tired rehash.