Movie Review (LFF): ‘One Man and His Shoes’ is a Fascinating Insight Into A Legend 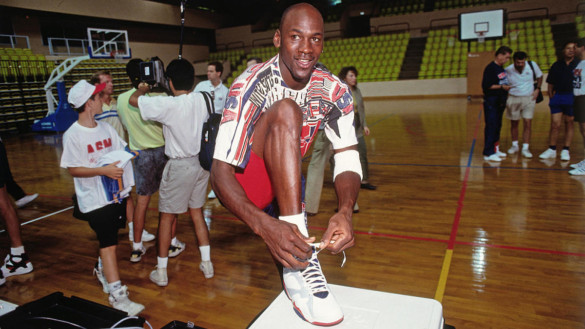 Synopsis: ‘One Man and His Shoes’ tells the story of the phenomenon of Air Jordan sneakers showing their social, cultural and racial significance and how ground-breaking marketing strategies created a multi-billion-dollar business.

There is arguably no greater sportsman of renown than Michael Jordan. The NBA legend was revered throughout the world in the 80s and 90s for his incredible athleticism and ability to win games almost on his own. His accomplishments for the Chicago Bulls, taking them from virtual fringe team to 6-time champions, is unparalleled. Untouchable as he was in the world of basketball, his influence spread out into the cultural zeitgeist; he was an icon for young African Americans, as stylish as he was personable. It’s no real surprise that his fame would give rise to a sneaker of equal prominence and stature, as long-lasting and legendary as MJ himself: the Air Jordan.

Air Jordans have been at the top of the mountain in the sports shoe industry for a long time now, and in Yemi Bamiro’s documentary, we get an insight into how this cultural phenomenon happened, and what it did to the societies it targeted. It’s an illuminating insight into an aspect of Michael Jordan’s impact that wasn’t quite addressed in this year’s The Last Dance documentary.

One Man and His Shoes starts off in the same territory as The Last Dance, charting Jordan’s historic rise and that of the Chicago Bulls, but then pivots to a more socio-economic view: Jordan’s fame was able to bridge the divide between black athletes and mainstream branding that had been eluding them thus far. As well as this, Nike was able to tap into the youth market in a way never done before – which had tragic consequences as well as financial implications.

At first, it seems Bamiro is more interested in the flashy side of the industry. Super quick edits of Jordan’s highlight-reel play over talking heads explaining why the man was able to capture the public’s imagination in the way he did. It covers ground around Jordan’s decision to sign with Nike, and why their campaign was so unique (in the past, with brands such as Adidas and Converse, the idea was to showcase an entire team. Jordan’s was the first to focus solely on him). It’s fascinating and dives into the psychological aspects of the decisions that were made. In that way it transcends a traditional sports documentary: it is less about Michael Jordan and more about how fame can be manipulated into sales with the right ideas.

We see instances of superfans who collect thousands of pairs of Air Jordans in their various different iterations (including someone in France who claims to own every pair of Air Jordans ever marketed) and another guy whom MJ gifted the shoes he wore when he famously broke his toe. The shoes in question are kept in a glass case like a museum artifact and take pride of place in the house. It’s astonishing, in a way, to see the level of fandom bestowed upon these shoes and Bamiro is excellent at capturing the electricity surrounding their releases. Viewers might find themselves wanting a pair of Air Jordans having never worn a pair before in their lives.

The most interesting part, however, comes when Bamiro turns his focus on the darker aspects of Air Jordans; specifically, the murder of young men like Joshua Woods killed for his pair of Air Jordans in 2012. Although this part is undoubtedly the most fascinating aspect of the documentary, it feels like  Bamiro struggles to get the right tone following the pacey, bombastic first half. To go from animated segments and enthusiastic talking heads to a serious and somber murder investigation requires a very deft touch and it’s not altogether pulled off here. As well as this, it’s not entirely clear what Bamiro is trying to say. He touches briefly on Jordan’s lack of involvement with the case and slightly hints that Jordan might have borne some of the responsibility for allowing the marketing to get out of control, but really he pulls his punches and that leads to a bit of a lightweight finale.

It’s a beautifully done documentary, with real elements of style and flair. At its best One Man and His Shoes captures an important cultural movement and the forces behind it, an important lesson to learn. The talking heads, also, are fascinating and give deep insight not just into the life of MJ but about the sport of basketball at the time, and the world of marketing. The two worlds are melded well and make for a thrilling showcase. Unfortunately, the last half of the movie tries to focus on a very different subject and it doesn’t feel like it works, specifically as Bamiro doesn’t seem as interested in diving into the ethical ramifications of Air Jordans as you might want him to.

Ultimately, if you’re a basketball fan you’ll find plenty to love here. At a brisk 80-min runtime and with a fascinating insight into a world which hasn’t been covered much, One Man and His Shoes feels like it could be a companion piece to The Last Dance; just don’t expect many answers regarding the darker aspects of Air Jordans.