Movie Review: ‘On The Basis Of Sex’ is unfortunately standard biopic fare 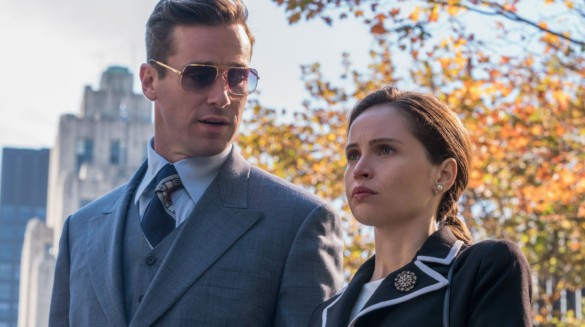 Synopsis: The true story of Ruth Bader Ginsburg, her struggles for equal rights, and the early cases of a historic career that lead to her nomination and confirmation as U.S. Supreme Court Associate Justice.

While I was lucky enough to see Mimi Leder’s On The Basis Of Sex in November, it remains one of the more confusing movies released. How is it that a feature release based on the rise of Ruth Bader Ginsburg to prominence (and eventually The Supreme Court) come across as a non-event. It certainly wasn’t the casting of Felicity Jones in the lead role (she has quite the resume). It certainly wasn’t the subject matter (RBG has never been more popular). So why hasn’t a film based on arguably the most popular current Supreme Court justice taken off? Well, it’s a number of things.

For starters, Daniel Stiepleman’s narrative seeks to accomplish so much yet fails to tell a compelling tale. Stiepleman’s story focuses on Ginsburg’s early years as she navigated a marriage, school, kids, her husband’s cancer diagnosis, and comes together just at the start of her work concerning equal rights for women. 3/4th of the narrative is mostly common knowledge and was covered brilliantly in the (Oscar nominated) documentary RBG. I found myself wanting to see more of her fight for equal right in America and not concerned about what got her to that point. The first two acts of the film are somewhat rote and are saved by a super third act.

It was her work that begins in the 3rd act which got her on the national radar and leads to her eventual appointment to The Supreme Court. Instead, we are treated to a history lesson which is fine but not pleasing. Jones and  Armie Hammer (who plays her husband) are solid and inject life into most of the source material. Sam Waterson is the biggest standout in the film and at certain points actually makes you care about a first act which was okay at best.

While Leder is a fine director and the pacing in the film is fine, On The Basis Of Sex amounts to nothing more than a non-event. My advice is that any of you are looking to see a compelling look at the life of Ruth Bader Ginsburg, then check out the documentary instead.