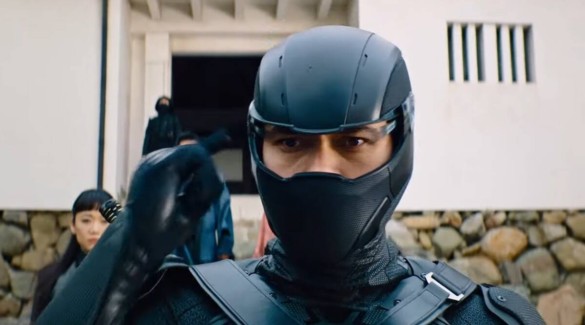 Synopsis: A mysterious lone fighter, known only as “Snake Eyes”, is welcomed into and trained by an ancient Japanese ninja clan, but finds his loyalties being tested when secrets from his past are revealed, as he eventually goes on the path to become the famous G.I. Joe hero.

It’s truly astounding how many companies are trying to replicate the success of the Marvel Cinematic Universe. Not to say that franchises didn’t exist before Iron Man or The Avengers, but they always felt like a series of stories laced together in a more linear narrative. Since Marvel, franchises such as the DC Comics and apparently now G.I. Joe are trying to capitalize on their brand. The last G.I. Joe movie to be released was in 2013, and it was a sequel to the original made in 2009.

Snake Eyes: G.I. Joe Origins is the first film to focus on (mostly) one G.I. Joe character and flesh out his back story, as the title suggests. The film doesn’t try to do a lot with the material it’s working with, but it also doesn’t succeed at much of what it’s trying to do. Apart from the strange accents and overall mediocre acting, Snake Eyes falls victim to its cliche plot and dialogue, confusing character choices and developments, and fails at the main goal it’s trying to achieve: action.

The plot of the film is entirely predictable from the second it starts. We see Snake Eyes as a child, and he watches as his father is killed in front of him. This happens within the first ten minutes of the film, so it’s not exactly a spoiler. It feels like the writers are trying to recreate a Batman origin story with their own character, but don’t know how to make it the least bit interesting or unique. The events that follow are all completely unsurprising, and only seem to happen because the film dictates that it needs to happen in order to keep the movie-going. You always know what’s going to happen next, and it’s never inspired by choices the characters are making or events that happen to them. Instead, it operates more like a storyboard that was never really finished.

Because of the strung-together story idea, the characters aren’t allowed any space to grow or develop in a way that really makes sense or is believable, they’re just kind of along for the ride. Snake Eye’s only personality trait is the fact that his father was killed as a child, and he’s honestly the character with the most depth to him at all, and even that seems to flip on its head in the third act. The other characters are only there to serve either exposition or predetermined and unmotivated conflict until suddenly that’s not what they’re needed for anymore and their purpose entirely changes as well. You can never understand what are a character’s motivations, drive, or desires. Instead, their actions only happen to dictate the plot, even if that means doing the complete opposite of what they were doing two minutes earlier. Alliances are constantly changing, good and bad are flipping back and forth, and characters only seemingly join up because it’s the most convenient outcome. It sounds confusing, and trust me, it is.

The greatest grievance of this film is definitely the action sequences. At the end of the day, this is an action film. It doesn’t need to be anything deep or moving, as long as the film entertains me, it can justify its existence. The action scenes are well-choreographed, especially the katana fighting near the end, but they suffer from multiple cliches and bad editing. In some of the first fights of the film we are greeted with the trope of “one person must fight 20 others surrounding him and he wins”, followed with pretty thick plot armor, putting characters in situations there’s no way they would live through but they need to because they’re a central character. This irritated me in the first fight, and it only continued in a majority of the fights throughout the movie. As the film progresses, there’s continually bad quips of dialogue thrown into the fight scenes, some even clearly added in post-production, that only continue to distract from the main focus.

But when it comes to the action, what is the main focus? I can tell that the fights look good, but the editing never seems to understand what it wants to focus on. I’m not sure if this is because they’re trying to show less violence and be more ambiguous with the kills that take place, or if the editing is just really THAT bad. We never have time to focus on what’s going on as the perspective is constantly changing to try to create a fast paced scene, but instead has the opposite effect, leaving me wondering when the fight is going to be over. Similar to the characters in the film, it’s unfocused and ineffective.

I did say that there were some successful moments, and I’ll touch on those. I think it’s incredibly smart to change the casting of Snake Eyes to Henry Goulding, and keep the entire cast Asian. From the brief research that I did (reading Wikipedia), Snake Eyes is not specified to be an Asian character, but his specialty in katana sword fighting is a distinct Japanese art. It makes sense to set the film in Tokyo and focus more on Japanese culture, although some of it comes off as performative at times. Henry Goulding is always beautiful to look at, and I’ll never question that, but I genuinely couldn’t tell if he was trying to hide his British accent or not. The entire film I was questioning if he was supposed to be British or American, and it was just distracting. Other characters rotate between accents as well, with some English speaking characters rotating between the triad of American, British, and Japanese accents. It only made the already unclear characters even more difficult to decipher, and while I always understood what someone was saying, I never exactly knew how they were going to say it.

I truly didn’t know what to expect out of Snake Eyes: G.I. Joe Origins. I thought the trailers looked cool, the score was fun, and the action looked interesting enough to check it out. I left the theater feeling like I had just watched a puzzle being put together, but each piece was rotated in a different direction and then jammed together to make a complete project. There is a complete picture in front of me, but it’s incoherent and unsettling. And don’t worry, they make room for a sequel!