Movie Review: ‘Nomadland’ is a Profound Look at the Lonely in America 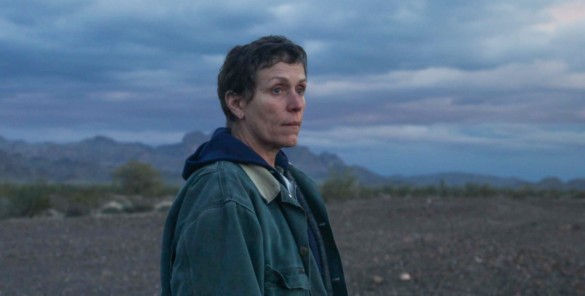 Synopsis: A woman embarks on a journey through the American West after losing everything during the recession.

We live privileged lives. Many reading this have a good job, a home, and a loving family to spend time with at the end of a long day. We live in big cities with tons of opportunities and activities to keep your mind off the harsh realities that face so many other people around this country and the rest of the world. The comfort we have is something many struggle to achieve within an entire lifetime. In Nomadland, the latest film from director Chloé Zhao, we are taken into a world where our protagonist, and the people around her, are fighting to get by, one small job at a time, city to city, living in their vans.

We meet Fern (Frances McDormand), a woman in her late sixties living in a sprinter van, coasting through the heartland of America looking for jobs. Her husband passed years before her voyage throughout the country, thus she found her purpose in traveling around, exploring a world we don’t normally get to see on the big screen. Leaving her conventional possessions behind, she makes up her van to fit her needs and quickly becomes a part of a community that is quietly growing around the United States right now.

Van life is a reality for people of all ages due to the hardships of the economy since the late 2000s. Thousands of people are struggling to keep the lights on, put food on the table, and have resorted to the idea of this being their way of life. This doesn’t make it easy on them, considering most businesses will only hire stable employees who live in the area, rather than someone who is looking for something part-time. Jobs are simply hard to come by, we hear about this during every political debate on television, but Zhao shows you that keeping this life is not always going to be easy for Fern. Yet through all the hardships and bad luck, she is able to rise above it all and keep moving on.

It can seem like a lonely business to do this sort of living. After all, Fern’s family believes she is a modern-day nomad, a person that moves around for various new opportunities, but also does it because she can’t be in one place for too long. She does this to mask the pain of her life, the lives lost and people taken due to the harshness of the 2008 recession. It’s clear that Fern struggles to become close to someone, but as the film plays out, her walls come down, realizing this way of life is better because of the people she’s met along the way. Fern doesn’t have to be alone, like many people in this world right now. Therein lies the secret as to why Nomadland is a perfect film for 2020; because it’s a commentary on the ideas of isolation and how we can’t allow it to consume us.

Zhao, whose previous film, The Rider, was one of the best films of 2018, continues to build on the style she curated within that film and the others within her filmography. Besides McDormand and David Strathairn, all of the other characters in the film are played by real-life nomads, people who live this life day after day. That authenticity is what makes Nomadland feel so real. Even though there is a merger of Hollywood and the real world in this story, you never for one second feel like this is being manifested in a way that is disrespectful. Overall, it’s a human story built off the stories and lives of those less fortunate to comfortably live in our country, yet they find the comfort of this lifestyle to suit them even better than before.

McDormand is stellar in the role of Fern, in what might be her best work since her Oscar-winning role in Fargo. This isn’t the showiest of performances, rather one that is stripped of fluff so it can feel like we all know who Fern really is and the emotional toll this is all taking on her. You feel like you could just watch her walk slowly on screen for hours, contemplating the ideas in her head, taking in the beauty of the world around her. One could easily fall under the spell of Joshua James Richards’ cinematography mixed with Zhao’s direction by just watching Fern go through each step of her life.

Ultimately, it’s not hard to connect with everything you see on screen because you can understand every character like they were someone you know. We’ve all experienced hardships in our lives, and Nomadland displays it all so vividly that it hits home hard. In watching movies, we forget that some of the best ones strike us in our most personal emotional spaces, making us react to it in a tearful expression of gratitude. Right now, there are very few directors that can elicit this kind of response from audiences, but one of those is certainly Chloé Zhao. May we see her continue to challenge her audiences, as well as herself, in making some of the best movies you can see on any platform.