Movie Review (LFF): ‘Supernova’ is a Tender Romance That’s a Devastating One-Way Trip to the Stars 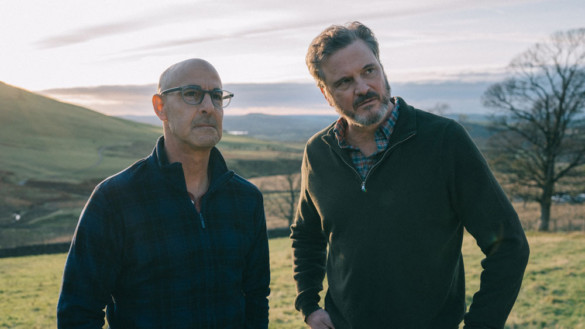 Supernovas occur in the final stages of a star’s life cycle, ending in a catastrophic implosion. I imagine losing somebody you love is a similar, soul-destroying process. Writer-director Harry Macqueen takes the power of this central image, inviting us in the first frame of his lip-trembling sophomore film to gaze up romantically to the stars, and proceeds to cause a luminous reaction in our own hearts. Intimately crafted and held inside the immense gravitational pull of Stanley Tucci and Colin Firth – two aging stars in their own right who have never been better – Supernova will draw you in and tear you apart.

Dementia is an overwhelmingly difficult thing to understand, for those suffering first-hand and the rest with no choice but to watch. The nature of the disease is uncomfortably intimate, allowing a uniquely destructive contemplation of a life half-lived, gradually splitting apart with each new day — mornings that don’t bring hope but slowly approaching darkness. (Tucci) is several months deep into his diagnosis when he and his gentle lover, Sam (Firth), take the pair on a road trip to the sparkling Lake District, meeting friends, rekindling memories, and stumbling into life-shattering emotional roadblocks on the way.

Sam is a well-known pianist and thinks one last concert performance is waiting for him at the end, something that has been encouraged and engineered by his partner. Tusker, a successful writer, adding even greater pain to his fragmented speech and failing mind, knows they are heading somewhere else altogether. Pretty much a two-man play, Macqueen’s composed second feature is a one-way journey into the unknown abyss, with a starry sense of reflection and two very different paths waiting at the end. Macqueen may play it safe, but there’s no escaping the splintering aftershock of this devastating love story.

It’s a road-trip movie in form, built up of a serious of beautifully written fragments of comedy and contemplation, which dim the closer the film gets to its obliterating final moments. Like a star, things appear bright at first, the humor more frequent, Tusker more present – I was particularly broken by Tusker’s reliance on humor as a coping mechanism that is equal parts uplifting and tragic. Tusker’s jokes never fail to warm the room. After all, he’s a writer, and words come easily to him, or they used to. So when he calls upon his intelligent mind – as he has always done – but this time there’s no answer, the silence of everybody watching feels like a funeral.

While Tusker might occasionally appear fine, his brief glimpses of normality have the double-edged effect of causing Sam to entertain delusions of a hopeful future, whilst also reminding him of an all-encompassing world he is about to lose. Tucci brings expected wit and warmth to the role, but it’s the subtle ways in which these two actors fill and expand each other’s spaces that make the performances so remarkable. Firth, too, is exactly how you’ve come to expect, although, like Tucci, he’s been shifted a little; smartly restrained as the shy, desperate Sam, which brings out a shaky vulnerability we don’t usually see with his natural on-screen warmth. Both Tucci and Firth reveal deeper, darker notes to a familiar crisis, as well as new chords in each other. Neither actor has shone quite in the way that they do here – softly, majestically, with an encroaching center of darkness.

The performances are made all the more impressive in light of the film’s quiet restraint, devoid of the awkward melodrama and heavy-handed approach that could have so easily anchored the story in soppiness. Instead, the script is wonderfully judged by Macqueen, who has guided the film’s two stars with equal care. This chronically tragic film is also focused upon an elderly gay romance, and where another film might have felt the need to lean on this for added drama, the ruthless impact of Supernova lays in letting such plot-points meld completely into the fabric of the story.

Speaking of heart-shattering impact, the emotional shocks don’t so much as explode from Sam and Tusker but quiver hopelessly into the light where the only thing left to do is confront them with brutal honesty. Neither men want this to continue, although one has accepted it sooner than the other. As soon as a revelation like this has escaped into the air, all that remains is the agonizing separation. It’s made clear early on that Tusker is somewhat at peace with his fate – and it’s the grappling of both men vying for different outcomes, that charges the drama. ‘You’re not supposed to mourn somebody when they’re alive,’ Tusker says at one point with a reserved smirk.

Acting as an efficient narrative framing, that doubles as a micro horror story, one of the most moving images I’ve seen this in a film this year has Sam discovering the book that Tusker is writing. The words on the page flow strong, only to shapeshift into indecipherable scratches of the pen, and then finally into nothing at all. Sam is having his time with Tusker reflected back at him; a half-finished life, and a romance that has run out of ink. Macqueen’s film is crafted of these small moments of exposed intimacy, of soft touches across the skin, and gazes that crack with the power of a crumbling home.

Macqueen side-steps common pitfalls of films of this kind by balancing its turbulent grief with moments of poetic reflection. There is a sense of cosmos gravity with its star-gazing moments of respite, found in Tusker’s side-passion for astronomy. Delicately given room to breathe in the quiet, expansive framing of Dick Pope’s cinematography, these poignant diversions reflect upon of the meaning of life, death, and the stardust we leave behind once we’ve gone. Humans may not have the dazzling gravitas of their galaxy counterparts, but we spend our entire lives indirectly touching the hearts and souls of everybody we meet.

For all of its punches to the gut, this is an incredibly tender story of love and loss, where two men unravel at different speeds, in opposite directions, in the shadow of the same dying light. Supernova can honestly feel like a wicked contest between two very fine actors giving the performance of their careers. Who can make you shed the most tears? After a while, once my heart had begun to ache, I started losing track.