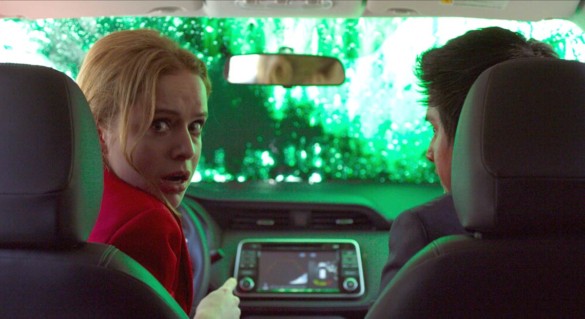 Synopsis: A high-society wedding is interrupted by the arrival of unwelcome guests.

Before I start the review, I want to highlight some information that you should know going into the film. This story is incredibly dark and has some triggers which may upset viewers and I think it is vital to warn you of them. If you are somebody that wants to avoid films involving graphic rape, false imprisonment, gun violence, and mass murder, I would say to avoid watching New Order. Whilst the choices made shows the dark nature of the story and works for the storytelling, I think it is important to know what you are going into when pressing play or paying for a ticket.

I went into this screening of New Order with only knowing one thing about the film: the fact it won the Silver Lion at the Venice Film Festival. If there is one thing that is great about these festivals, it is how they manage to highlight foreign cinema to an audience that is perhaps not aware of the film’s existence. To give some context as to where I sit with this particular, two of my top three films are foreign language. My top film was Another Round with Mads Mikkelsen, but New Order is certainly in my top three.

This is a film that takes you on a journey like no other. With some films from this festival, I had no idea what was going to happen because the plot either felt loose or the editing was not as tight as I would have liked it to be. That is not the case with New Order. I had no idea where this plot was going, but that was down to the fantastic script done by director Michel Franco. There are so many twists and turns taken in this film that will leave you shocked at what you are seeing.

The themes that this film handles can be compared to another foreign language picture from last year, Parasite. It seems like filmmakers are becoming bolder in their stories, as well as condemning the world around them. Both of these directors tackle the difference in life between the rich and the poor but manages to merge both of the worlds together to show the contrast between them. The film doesn’t feel heavily focused on one or the other, there is a nice blend of how both are seen.

The first act of the film, the wedding, is so beautifully shot and edited together. It places the audience in a safe and familiar location for a while, letting us establish the characters and their relationships. This is smart, as what comes after is a huge shock to the system and the storylines start to become broken up between the poor and the rich, with them working out a way to come together. This showcase of how the rich live shows how comfortable they are, and presents a challenge when something intervenes with the power that money naturally brings to them.

As I alluded to in my opening for the review, this film gets incredibly dark. This is a story about the poor rebelling in this not-too dystopian Mexico, but it is not just a look at how the poor are treated differently. This is about the impact of money itself, and how the rich can pay their way out of horrible situations and the extra luxuries they receive, such as being favored by their government and local police service.

This is a story and theme that has been tackled by filmmakers many times now, but none go as hard on the subject matter like this. With many films, such as Parasite, they either use imagery to suggest some of these harder topics or they use humor to make the audience feel at ease whilst watching the film. This is not the case with New Order. This film is incredibly graphic, hard-hitting and there is no humor to be found after the first act. It can be incredibly hard to digest and sickening to think that this sort of thing could, and sadly does, happen in more divided regions of the world.

I do understand why many people gave this film a negative review, it can be hard to digest and the film is of an acquired taste. Instead of being suggestive and sticking to entertainment, this film is dark and is more focused on telling the truth and showing it all. I really admire how bold Franco was with this film, and I ended up loving it. This may, however, be a film I put on the list of films that I may not be able to stomach again though.