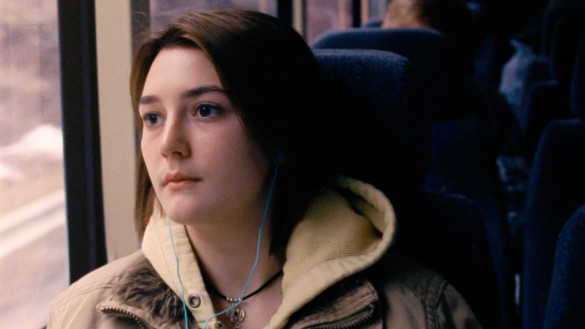 Synopsis: A pair of teenage girls in rural Pennsylvania travel to New York City to seek out medical help after an unintended pregnancy.

All of our lives are filled with difficult choices, but most of them pale in comparison to those few life-changing moments that the unlucky few have thrust upon them. This is especially when those decisions don’t necessarily have a black and white, correct answer. There is nothing so intensely alienating as knowing you have to make that difficult choice on your own. Yet, in many cases, even if you have support, you feel that you are walking into that moment by yourself.  Although this is not the first-time director Eliza Hittman has examined this feeling in her early career as a director, this particular emotion is palpable throughout the runtime of Never Rarely Sometimes Always.

Never Rarely Sometimes Always, ostensibly a movie about one young woman’s choice to have an abortion, is truly about many things, including female friendship, the predatory nature of men, loneliness, and the importance of the smallest gestures. Sidney Flanagan, in amazingly her first film role delivers one of the most genuine performances imaginable as the lead, Autumn. No single scene exists without her in frame, and the film is better for it. Much like Harris Dickinson in Hittman’s last film, Beach Rats, that lack of film experience aids the audience in feeling an immediate affinity for our lead. Autumn is, of course, not a perfect human being, but a person going through a horrific moment, and there are moments in which her interactions betray the stress that she is under.

Those interactions, specifically with her cousin Skylar (Talia Ryder) are honest, and never tip over into high drama. The two young women snap at each other on occasion, but also depend on and care for one another. In one specific scene, a simple, elegant shot of the two women’s intertwining fingers details more about this relationship (and the power of women bonded) than pages of exposition could possibly hope to define. This moment efficiently shows not only a connection between the two, but is also poignant dissection of both men and women. Some may refer to the gender inequity in this film as preachy, but I found it particularly truthful and raw. As women, especially young women, are preyed upon daily and shown repeatedly that their bodies and sexuality are traded upon by men, the scenes between Skylar and Jasper (Théodore Pellerin) ring completely true. Although Jasper is never vicious, he is nevertheless a man taking advantage of a situation, and thus, not blameless.

Without a doubt, the most powerful scene in the film, and likely one of the most moving you will experience all year, involves Autumn and a female social worker discussing her upcoming procedure. As the scene begins, both women are equally in the shot, but as it progresses, cinematographer Hélène Louvart expertly, and subtly, switches focus to solely hold Autumn in a close-up. This decision offers two distinct advantages. First, we understand the isolation of making this choice, especially at this young age. Secondly, it enables us to narrow our focus purely on Flanagan’s performance.  Although she delivers a staggering range throughout, this is the moment she truly shines. Every choice, both behind the camera and in front of it, is utterly perfect for this stretch. This scene works both in a vacuum and in the arc of the story. The social worker (Kelly Chapman) is played by an actual counselor, and it shows. Her slow repetition of the questions for which the film is named, and her genuine empathy for Autumn are just what is needed as the camera rests on Autumn.

Most importantly, even at the moment of truth, just before her procedure, Never Rarely Sometimes Always holds back and refuses to give us any simple answers. Many films about abortion take a definitive stand one way or the other. In many ways, it is not actually a film about abortion as an issue, but instead, it details one woman’s choice. Because of this, after that choice, the film in neither celebratory nor sorrowful. Impactful, terrifying choices such as Autumn’s do not end when the credits roll. This will have an impact, whether positive or negative (or both), moving forward for many years.  And sometimes, no matter how much people try to be there for us, we must make that choice, and live with it, alone. Hittman manages this intensely human story without pomp and circumstance, and without ever devolving into after school special territory. Never Rarely Sometimes Always is truly an achievement worthy of a large audience’s attention.