Featured: Movies That Grabbed The Ire Of Politicians 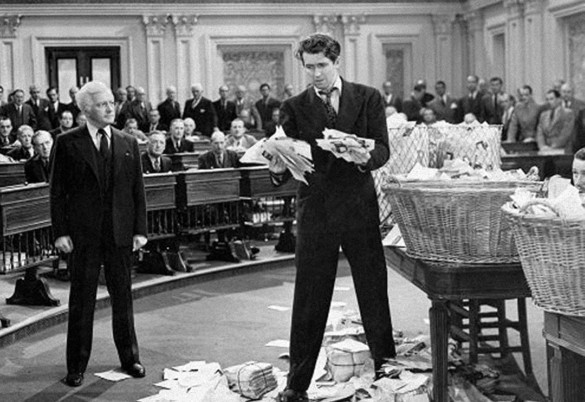 So, as you probably read awhile back, our Commander-in-Chief is no fan of Parasite because he finds it insulting that a foreign movie was given Hollywood’s most prestigious award. And Neon had that brilliant clap back, to which all of the major studios should find the social media manager and hire that person. So, the President is sour on foreign imports. How surprising. Build a wall around that, if you can (or not). But he’s not the first politician to feel that way about a movie.

Frank Capra’s anti-corruption drama tells us something so obvious since the beginning of time: all politicians are corrupt and seek to profit through their power in Congress. When it screened in Constitution Hall to members of the Washington elite, they condemned it for portraying them as anti-American to the ideals of a democratic government. Senate Majority Leader Alben Barkley said the film gave “a grotesque distortion…as grotesque as anything ever seen,” about Congress. One journalist suggested that movies not representative of American values be banned (which violated the First Amendment), while the American Ambassador to Great Britain, Joseph Kennedy – the patriarch of the most famous political family – said it would hurt American prestige in Europe as the continent was beginning to go to war again. Yet, Capra and Columbia Pictures did not relent to pressure and the movie remains a landmark on political, social commentary on American democracy.

One of the great anti-war films of all time didn’t get the love from governments and militaries who had a connection to the real-life story it is based on. When the French army and government officials saw the film, they were horrified and successfully kept United Artists from releasing the film until 1975. To avoid damaging their newly warm relations, the West German government ordered it withdrawn from the Berlin Film Festival and released it in 1958. Even Switzerland, a totally neutral country, banned the film until 1970, and the American military kept the film being released in all areas for entertainment. With the Cold War, Algerian Conflict, and the rise of Charles de Gaulle as a politician, they chose to close a lid on any mutiny that could have happened.

This Canadian documentary short focused on the danger of nuclear weapons through the words of activist Dr. Helen Caldicott and the relation to pollution, ozone depletion, food contamination, the effect on animal species. Because of its criticism of nations who possessed these weapons, the Justice Department had it banned temporarily and labeled it as “foreign political propaganda.” The outrage over the government’s decision helped its cause when it won the Oscar for Best Documentary (Short Subject) and convinced Canada’s Prime Minister to push for nuclear arms reduction.

James Cameron’s return to the big screen with his decade-long production that shattered every record made (until Avengers: Endgame passed Avatar overall) brought in the wrath of conservative politicians and commentators who saw the deliberate anti-war, anti-capitalist, and pro-environment themes in it. When a noted socialist like ex-Bolivian President Evo Morales praised the film, when Palestinian protestors dress up as Na’avi, and when it is compared to Brazil’s native tribes being killed and forced out of the Amazon by loggers, personalities like Glenn Beck and Jonah Goldberg came in to be highly critical of it. True, it is obvious the anti-American military themes with parallel views to the invasion of Iraq and Vietnam – Cameron said it is about how greed and imperialism destroy things. Then, there are the pantheism elements, which scared Christians and brought criticism that Cameron was promoting paganism over traditional theology. And these are just some of the criticisms many people have against the movie and should be expecting more of with its sequels.

This is one of the most stupid criticisms about a singular shot and which may have sunk the film’s box office chances. Here is a movie about an American hero, Neil Armstrong, his personal life, and how he became the top guy at NASA to finally get to the Moon. It’s a great film by Damien Chazelle. To my editor JD Duran, it’s a movie that turned on the #JDTears. Yet, when it was revealed that the actual planting of the flag was not shown, even though a shot of it clearly has an American flag on the Moon, conservatives (fuck you, Marco Rubio, you spineless fraudulent twat) attacked it for being not patriotic enough, including POTUS. Only in America do we complain about a flag. It’s a flag!!!