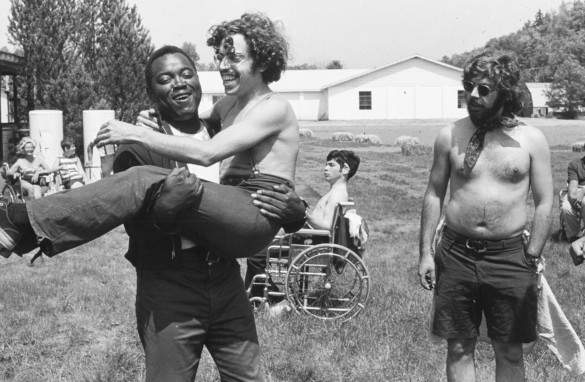 Synopsis: Down the road from Woodstock, a revolution blossomed at a ramshackle summer camp for teenagers with disabilities, transforming their lives and igniting a landmark movement.

One of the few things that Netflix has entirely succeeded in is making documentaries an important focus of their original content platform. If you hear about a buzzed non-fiction film that made a debut at Sundance or TIFF, it’s very possible that Netflix acquired it quickly. And for the most part, the documentaries they’ve made are pretty solid. Starting with their 2017 Oscar winner Icarus, you’re likely to see Netflix somewhere in the Best Documentary Feature category at the Oscars. It’s possible that they’ll continue that luck with their latest doc, the Sundance Film Festival premiere Crip Camp: A Disability Revolution, a solid but flawed advocacy/community portrait hybrid.

Directors Nicole Newnham and James Lebrecht start to achieve something unique with the first half of Crip Camp, starting with a warm portrait of a camp run by and for kids with disabilities. Camp Jened was only a few miles from Woodstock, NY, but the ramshackle spirit was felt down the road. Jened was founded in 1951, but blossomed throughout the 1960s, carrying the spirit of 60s culture with it. Like the wonderful archival footage in the documentary shows, Jened was a ramshackle endeavor, filled with community and caring staffers to make up for the loose ends. The camp is repeatedly described as a utopia by campers in the film, and it’s easy to see why.

Newnham and Lebrecht use a fair combination of talking head footage and archival shots to create a holistic portrait of the era, the camp, and the people, but sometimes the interviews can take away from the joy that radiates from the older images. Each interview with an old staff member or camper somewhat takes away from the excitement of the community that’s being captured. The grainy black and white that punctuates the first act of this documentary can be so powerful until it’s interrupted by present day perspectives who don’t really have much to add. You can tell the camp is special, but it’s with moments like this that you wish the directors would let the audience experience the camp and what was so magical about it without a voice over dictating how you’re supposed to feel about it.

Aside from a few obvious needledrops, the transition to 1960s disability rights advocacy film is a seamless one. As the film gets refocused on how this camp influenced a moment, the more standard and less invigorating the doc can seem. It isn’t a big issue, but there was something miraculous about the titular camp, and there’s something average (although important) about the way the doc wraps up. The use of modern day interviews start to make more sense as Newnham and Lebrecht pull off an obvious but sweet ending, but it can still be hard to move past the standardness of certain aspects of this film. Every great moment is offset by standard doc movements. Still, it’s not hard to see why the Obama’s picked this to be a part of the Higher Ground production company, and it’s surely an important one. It just feels like Crip Camp: A Disability Revolution would have been oddly better off if it had focused on the camp and less on the revolution.