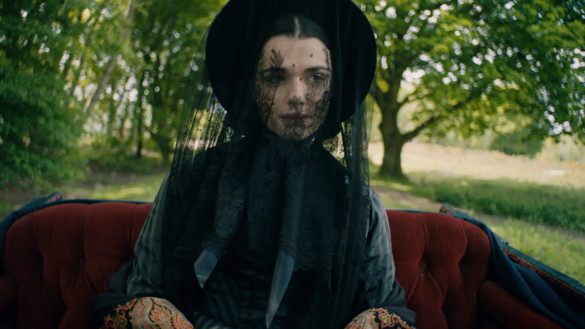 Synopsis: A young Englishman plots revenge against his mysterious, beautiful cousin, believing that she murdered his guardian. But his feelings become complicated as he finds himself falling under the beguiling spell of her charms.

The mysterious Rachel (Rachel Weisz) arrives in Cornwall to meet her cousin Phillip (Sam Claflin), the adopted son of her recently deceased husband. Phillip is determined to subject Rachel to an intolerable visit having received frenzied, scrawled letters from the late Ambrose revealing that Rachel is a danger to his life, only to find on her arrival that she is a beautiful and charming young woman with a generous spirit. Phillip is intoxicated by Rachel and soon alters the terms of his inheritance to give the family home to her when he turns 25 years of age. He is under Rachel’s spell; she is his sickness, but is she all she appears?

The most striking thing about Roger Michell’s adaptation of Daphne Du Maurier’s novel is the outstanding beauty of the cinematography. The film presents its audience with breathtaking sweeping shots of the Cornish coast imbued with sandy, stony hues. The contrast of the film’s frequent use of dark rooms with flickering candlelight to the dazzling brightness of the cliffs and the daylight sky is jarring. It makes us uneasy; as does everything else.
The film’s score invites the audience to give over to paranoia and doubt Rachel’s intentions as much as Phillip does not. Rael Jones’ soundtrack is foreboding to say the very least and does a great deal of the work in surrounding Rachel’s presence with an air of distrust. Of course, Du Maurier’s compelling narrative conjures a sense of suspicion too; who swears revenge on someone only to immediately fall head over heels for them and sign everything away in the name of love?

Michell limits what his audience are able to see, creating a claustrophobic space that reflects the sudden intimacy of the central two characters. Whilst faces and expressions are often only visible by dim candlelight, the shot-reverse-shots of conversations are very shallow in focus. We see a face, a flame, pearls bouncing down a staircase and often have access to little else. It is a suspicious love story; a story that is about all the things we don’t know as well as what we see. There is an air of suppressed eroticism that is beautifully handled for the film’s first two acts until, unfortunately, a scene in which the pair are depicted rutting away in a field of bluebells. The mystique somewhat dies from hereon.

A crucial plot point to the film’s final revelation is laid on so thickly that you will see it coming a mile off and as beautiful as the film is aesthetically this is unfortunately not mirrored in the dialogue, which is clunky in places and occasionally weighed down by plot exposition. There is also moment of sudden coarse language from Phillip’s manservant Seecombe (Tim Barlow) that has no place in the film; it is entirely out of keeping with the 19th Century setting and baffling given that the object of his outburst is a Christmas tree.

Rachel Weisz is a fantastic casting choice for the curiously enticing Rachel and she is such a fascinating screen presence that the other performances get a bit lost in her shadow and in the fragmented plot, played out through conversations that alternate between dark bedrooms and beaches. Holliday Granger’s performance stands out second to Rachel Weisz’s as Louise, the young girl Phillip ought to marry. With limited screen time Granger delivers a well-rounded performance as the supportive friend whose suspicions are shared with the audience and whose heartbreak at Phillip’s new affections are painfully masked.