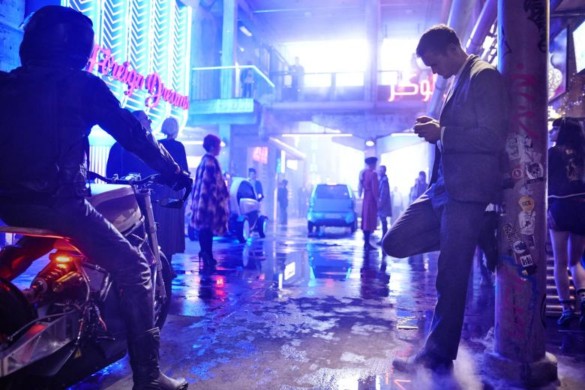 Synopsis: When his girlfriend vanishes, a mute man ventures into a near-future Berlin’s seamy underworld, where his actions speak louder than words.

Hidden deep within the criminal underbelly that’s sheathed by the soaking wet, not-so-distant Berlin, lies a population of cynics. Among the presence of artificial intelligence and these now evolved gangsters is a displaced, local mute bartender, Leo. Mute is not merely a film, but more so a visualization of the descent of Duncan Jones’ career. Jones has always garnered such avid amounts of admiration personally, due to the painstakingly high level of devotion that was so discernible from his debut film(s). His first being 2008’s Moon, which at its current period resounded as untreaded waters for the science-fiction genre. However, we’ve all become fully conscious of the calamity known as Warcraft. Henceforth with Mute, Jones’ deterioration as a visual craftsman has alas, finally submerged him.

The enshrined mournful sense of atmosphere allows for an even larger-scale magnitude of contrast to the likes of Blade Runner. While the comparisons are admittedly uncanny—not just structurally but aesthetically—the validity of that argument feels unjustified. Mute’s technicality is in a completely different ballpark in terms of value, so shredding it’s universe to pieces simply feels like a gist where one compares every somewhat stylistically similar science-fiction film to that of Blade Runner. Of course there’s no denying that the set design is quite obnoxious indeed, sloppily utilizing generic sci-fi inner city tropes (rain, smoke, neon lights) to further exalt a zealous, neo-noirish grime. Yet the viewer can never unlock that sense of futuristic realism. Visual storytelling attempts to manifest such graphic anecdotes that creators can only hope become embedded into an environment for their exploitation. And with that, Mute isn’t nearly as vivid as Jones is wanting it to be.

The story alternates between narratives as it tends to shift attention from our main(?) plot with Leo, played by Alexander Skarsgård, who’s searching for his lost girlfriend Naadirah. While also following the endeavors of two Americans who become entangled in that progression, one being Cactus Bill (Paul Rudd) and his acquaintance Duck (Justin Theroux). This film doesn’t ever corroborate a truly clear enough focal point. They allot and equal amount of time for both Leo’s story arc with the subplot of Bill and Duck, leaving viewers with no general consensus or even a clear motive for our supposed antagonist. There’s even instances where the Cactus Bill storyline surpasses an intrigue than the principal account. That extent of that internal issue dissolves in to an overshadowing of the story and once we’ve reached a *climax*, there’s no intensity nor a sense of payoff. Due to the lack of a more pertinent set-up and a non-disclosed storyline, every fragment has simply perished by the end. By that point, there’s precisely no engagement or assertion left to give.

Skarsgård and Rudd are the only faithful vitality attached to this film. They carry the scarce heap of substance and lack of development for their respective intertwining stories. And on the other hand are the only people in the movie that look like they might want to be there. There’s only so much emotion an actor can transmit when given such a painfully muted (pun intended) screenplay. With the blatantly foul attempts to make the most of the script, but even then every character among Leo or even Bill, lack any depth of complexity. They’re penned and become woven in to the page-to-screen adaptation as one-dimensional personas but with virtually no personal eruption or direction built-in. The only thing that ever comes off as relatively authentic is the relationship between Leo and his partner. They’re opening prologue somewhat displays the mutual affection for each other and is the only veritable aspect when magnifying the story structure and such.

Perhaps the modest silver linings I can possibly squeeze out of this insipid effort of a film, all derive from their technical components. While not mind-shattering, Clint Mansell’s score isn’t wholeheartedly awful, as it manages to synthesize a few idyllic chords to authenticate the sci-fi era and romance. Gary Shaw’s cinematography doesn’t quite achieve that level of abhorrence either. It’s only true struggle is how it’s employed, but it’s quite unremarkably harmful nonetheless. Omitting those couple of tangencies, every other audio/video feature can only be eminent for how abysmal they are. Down to the wonky editing, lighting, and most embarrassingly the choreographed action for the two scenes that actually expand upon the opportunity. There can’t be any excuses for that, especially in a universe with as much freedom as this one pertains. All of these adjustments could’ve been made had production been more secure, but what happened during that time is now the past.

Let’s just hope Jones is given another chance to redeem himself as he’s journeyed onto an odd path as of now. Again, perhaps if the production was handled more superior this could’ve been the ‘spiritual’ sequel to Moon that I was looking and hoping for. For now I suppose we’ll just have to stick with excessively subpar incarnations before we can get another true gem from him. At least it’s still better than Warcraft.