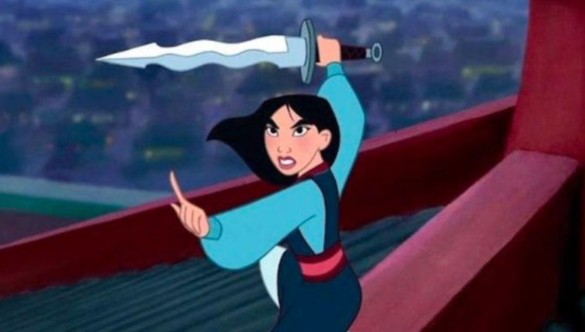 Synopsis: To save her father from death in the army, a young maiden secretly goes in his place and becomes one of China’s greatest heroines in the process.

Disney Princesses have been a staple in the Disney genre since 1948 when Walt Disney released his first animated feature film, Snow White. For 50 years most of the female characters in these animated films fit the “damsel in distress” stereotype. They were all pretty, a majority caucasian, teenage girls who yearned for true love and a charming prince to whisk them off into the sunset. There were a few exceptions, but none truly broke the mold until Mulan in 1998. We saw glimpses of what a strong female lead would look like with Belle in Beauty and the Beast (1991), Jasmine in Aladdin (1992), and Pocahontas (1995).

Mulan is based on the story of Chinese legendary warrior Hua Mulan. The basic premise is the same, but some details are different. A young girl secretly joins the imperial army in her father’s place to spare him from going to war again. She excels as a warrior, is rewarded for her achievements, and earns the respect of the men. Where the original legend and movie differ is when everyone finds out Mulan is a woman. It’s an epic and inspiring story, proving that Disney movies not centered around fairy tale romance can be successful too.

The film has a stellar cast; Mulan is voiced by the amazing Ming-Na Wen and her singing voice is done by Broadway legend Lea Salonga (who was also the singing voice for Princess Jasmine). Commander Shang is BD Wong, who most people will recognize from Law & Order SVU or the Jurassic Park franchise. The most recognizable voice in the cast belongs to Eddie Murphy who plays the travel sized (for your convenience) dragon, Mushu. That’s just the main cast –  if you listen to the minor characters you’ll hear Harvey Fierstein (Yao), James Hong (Chi Fu), Donny Osmond (Shang’s singing voice), Pat Morita (the Emperor), and George Takei (First Ancestor).

Mulan is often listed as a favorite or “top tier” Disney. I believe that is due to the compelling story (it’s something different than its predecessors), a new animation style that includes traditional Chinese themes, and the amazing score and soundtrack. The story focuses on Mulan’s bravery and desire to protect her father. She’s introduced as a girl who doesn’t quite fit into the societal role assigned to her. She wants to bring honor to her family but she also wants to be true to herself. The viewer gets to see her grow in confidence as the story progresses. She isn’t looking for true love like many of her Disney predecessors, and while she does find it in a nonconventional way,  it wasn’t the focus of the film. Mulan is one of my favorite Disney movies because it was one of the first kid’s movies that showed a woman overcome real adversity. You hear from other characters throughout the film that women are inferior, they can’t talk in front of men, they’ll be killed for breaking the rules, etc. Mulan does what she feels is necessary in spite of that. She is eventually recognized as a heroine who saved all of China. Even the main villain, Shan-Yu, a ruthless foreign invader recognizes Mulan as the soldier who defeated him and a threat. Her being a woman didn’t even matter to him. Including that short scene, where Mulan confronts Shan-Yu, helped solidify that Mulan has become a true warrior, despite the limitations placed on her gender. Disney wouldn’t give us another strong, independent female lead like Mulan again until Tiana in the Princess and the Frog (2009) eleven years later.

The way the movie is animated is also something that I find unique and interesting. They open the film with watercolor brushstrokes and traditional Chinese art. That style continues to flow into the rest of the film, especially noticeable in the background in things like smoke and water and in some of the character design (like Khan, Mulan’s horse).

Jerry Goldsmith’s score is one of the best ever featured in a Disney movie, and he was deservedly nominated for an Oscar (but somehow lost to Shakespere In Love). In addition to the score, Mulan has great songs and musical sequences. Honestly, how many people can resist adding “To Defeat the Huns” when someone says “Let’s get down to business”? Not many… The film is also credited for launching pop icon Christina Aguilera’s career. Until she recorded the pop version of “Reflection”, Aguilera hadn’t yet recorded a US single or album. She has recorded a new song, “Loyal Brave True” for the live-action remake of Mulan set to release sometime later this year.

Mulan is a groundbreaking film in many ways. This was Disney’s first DVD release and their last animated musical released on VHS. It was the first Disney film to feature an Asian heroine and she remains the only Disney princess of East Asian descent. Mulan also specifically mentions cross-dressing and shows multiple characters doing so. This doesn’t seem like much now, but almost got the film a PG rating in 1998. Mulan also has the highest body count of any Disney character, ever. Mulan managed to give us a musical, with goofy Eddie Murphy humor, while also showing us the horrors of war and resisting archaic (but unfortunately still relevant) assigned gender roles and their imposed limitations. Mulan (1998) will forever be considered one of the best Disney movies ever made. Even though that high bar is set, I am still excited to see the live-action remake when it eventually comes to theaters. Until then, I will rewatch the trailers, listen to the soundtracks, and continue to revisit the endlessly rewatchable, near perfect, animated classic.

Hear our podcast review on Episode 371: