Movie Review: ‘Mudbound’ is an esteemed proposition of bloodshed and inequality 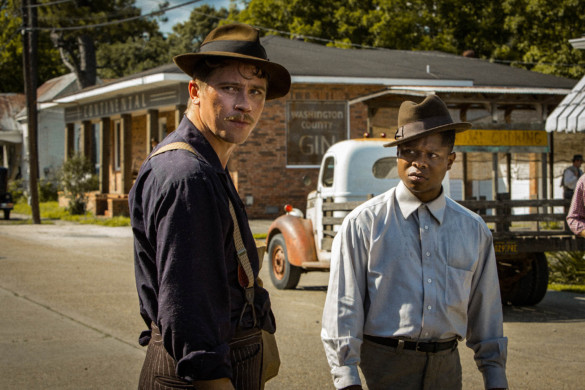 There’s been a recent trend among films in Hollywood that all wish to cover the substantial weight of racism. We’ve seen these films on numerous accounts and for the majority of the time they all adopt the exact same formula. Above all, they end up being more successful than not in putting on display the prejudice and inhumanity that occurred with this past discrimination. But what makes Mudbound the outlier from this formula? Everyone knows there’s a fine line amidst the thick identities that are love and hatred. Where does one draw the line when those paths intersect? All of these are questions that Mudbound takes initiative of. And rather have the film answer them, it permits the audience to make a choice.

Dee Rees’ proficiency in devising this fertile landscape provides a rather callous ode to classic World War II-esque settings. Feeling almost reminiscent (in terms of stylistic features) to iconic pieces of literature such as Of Mice and Men and The Grapes of Wrath. It’s built and represented in such a way that I can’t put to words. Our characters are so reliantly dependent on the world around them that it only avails to the experience even more outstandingly than anyone could’ve ever seen it being like. Virgil Williams does a plausible job with helping establish this world with Dee Rees by co-writing the script. Rather than conducting an inconclusive resolution, he dignifies the basis how through all of this contempt and disgust, figuratively, this so-called mud just continues to build and build upon our protagonists. And the only way to escape this metaphorical “mud”, is through love. Mudbound essentially, breaks boundaries. In the aforementioned, I stated this film is like none other in its genre. Needless to say, this is why. Rees and Williams don’t shy away from provoking the audience. Perplexing them with what our values of love and hope really mean and it’s unforgettable.

There’s an unnoticed level of fear present to this films atmosphere that becomes interwoven into each grueling performance. The task of portraying citizens in a time where racism and hostility like this was common carries its own extensive weight and pressure on one’s shoulders. Not trying to take anything away from the rest of the supporting cast, but Garrett Hedlund, Jason Mitchell and Mary J. Blige are just a few of the overwhelming standouts. Hedlund continues to build a reputation for himself in his burgeoning career whereas Jason Mitchell proves that his performance in 2015’s Straight Outta Compton was indeed no fluke. As he delivers one of the most gut-wrenching supporting roles thus far in 2017. Mary J. Blige additionally provides more scene-stealing material to the astonishing cast across the board. No lack of depth here, and not much else to express.

Unless you’re desperately unboxing and dissecting this film, it’s tough to find any faults that tremendously hinder the already sublime aspects of the three major components of acting, writing and directing. I suppose the progression of the film isn’t as smooth as people might hope for. It might be perceived as something that starts to become a bit sidetracked before it finds its necessary footing. This could be a big turn-off for audiences but if given the correct chances and context, it shouldn’t matter. Excluding that minuscule flaw, everything we’re given is incomparable.

It’s refreshing to see a film among this genre inflicting such a strong emotional bond between our two main protagonists(Garrett Hedlund and Jason Mitchell). Obviously their companionship is somewhat forbidden in a way due to the era in which the film takes place in, but it’s that sense of real friendship and appreciation that gives some sort of satisfaction to the viewer. That is until we’re exposed to the climax. All that needs to be said is that, there’s never been something so daunting and so emotionally oppressive for a film tackling this subject. The already fatalistic tone takes an unexpected turn for the worst. This is uncomfortable, sweat filled, anxiety inducing filmmaking at its most lethal.

Mudbound consists of such precise filmmaking. It’s inner workings might be difficult to achieve under provision for some but once under the proper direction and they’re thriving on all cylinders, there’s no stopping them. The performances, the tone, the theme, the setting, the cinematography, the script, the story—I could go on for ages, but you get the point. It’s an unpolished, influential message to modern society, but more than anything, it’s an admirable period piece from Dee Rees.