Movie Review (Sundance): ‘Misha and the Wolves’ is a Perfect Acquisition for Netflix 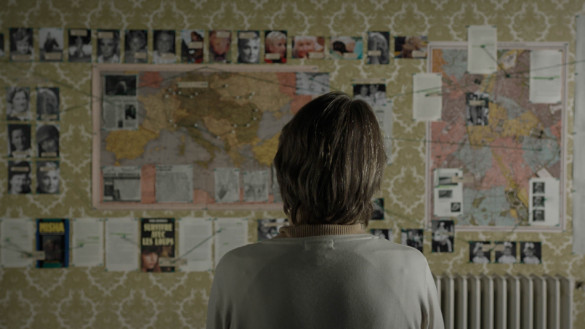 Synopsis: The dramatic tale of a woman whose holocaust memoir took the world by storm, but a fallout with her publisher – who turned detective – revealed an audacious deception created to hide a darker truth.

I want to give you all the experience that I had when I went into this film, which is with as little information as possible. This review, whilst talking about the technical craft and basic synopsis of the film, is not going to touch on much in regards to the narrative. From the first few minutes, this story already hooks you in with how insane the narrative is. From there, it just becomes even more unbelievable as each small piece of detail is revealed. I do not even want to hint at that details, as it will ruin your viewing experience.

It was announced after the screening of Misha and the Wolves that numerous studios purchased the film, most notably Netflix. Even before that announcement, it was clear watching it that it would be a film that would easily fit into their current catalog. This is exactly the sort of documentary that Netflix loves to promote, the story that you cannot predict where it is going and just continues to unravel. Netflix gravitates towards the stories that you need to tell your friends to watch as it’s that unbelievable, and that is simply the perfect way to describe this story.

I’ve recently had criticisms of other documentaries at Sundance not managing their runtime well. Some have gone on for too long, whilst others would have benefitted with more time to tell more of their story. Director Sam Hobkinson manages to find a nice balance with Misha and the Wolves, telling this story concisely and with enough detail to leave you satisfied by the end. It didn’t overstay its welcome and become something that it wasn’t, and it didn’t need to as the story is incredibly gripping by itself.

This film keeps with a traditional editing style, using interviews to help propel the story forward. This is a story that has impacted so many people, and it is interesting to see how their perceptions change throughout this documentary. There are some deceptions done with the editing of these interview sequences, and I will not say how, but it certainly helped with the tone and the shock twists laced throughout. It’s so easy to get sucked into the original premise of this story and want a full version of that, but the film becomes so much more and that perception makes it all the more urgent to see the final result of the conflict.

There is another editing choice made to insert recreational footage of the main story into this film, and these shots are so beautifully filmed. Not only do they help establish a visual representation of the story right from the opening few minutes, but they also add a level of filmmaking to what could have been a standard documentary. It is hard not to be entranced by these shots, especially when information is revealed later on that is linked to the film industry itself. I also like how the title cards are done for each of the people that are interviewed, highlighting their roles and relationships to the main subject and the impact they have in shaping the narrative.

I am usually the target demographic for these types of documentaries when they are made well and have a clear sense of direction. There are some that go by me, like Tiger King from last year, that I found to be lacking in direction and narrative. I am glad to say that Netflix has a winner on their hands now that they have officially acquired Misha and the Wolves, and I cannot wait to hear everyone talk about this story when it finally releases. Whatever you do, please go into this film knowing as little as possible. The viewing experience will be rewarded for your patience.