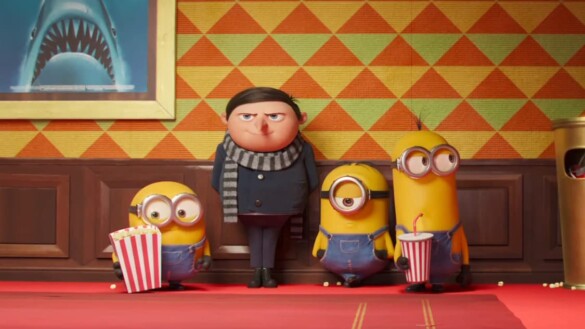 Synopsis: The untold story of one twelve-year-old’s dream to become the world’s greatest supervillain.

Since the dawn of computer animation, much value has been placed on photorealism – how much can a computer generate something that looks like the real thing? While some larger studios put all of their considerable resources into achieving that kind of wondrous beauty in their animated features, Illumination has always gone in the opposite direction. Instead of trying to create a world and characters that look better than if they had been filmed live, the studio prefers to use its computers to create the most elastic, anarchic cartoons that it can. They harness the whiz-bang potential of computer animation for the silliest ends possible, and while they don’t always hit the mark, Minions: The Rise of Gru is a bullseye.

The film is exactly what it says on the tin: Everyone’s favorite gibberish-speaking, banana-loving little yellow guys have found their “Mini Boss”, a middle schooler named Gru (Steve Carell) – who we know from the Despicable Me movies grows up to be a supervillain with a heart of gold – and, in 1976, they help him rise to prominence. Along the way, they travel to San Francisco, learn kung fu from a master teacher-turned-acupuncturist (Michelle Yeoh), and do battle with the biggest bad guys of the time, The Vicious Six. Right from the start, it’s clear that the time period is not going to be an incidental detail, with disco and funk needle drops abound, and the first character we meet is an animated ‘Foxxy Brown’ type named Belle Bottom (Taraji P. Henson), who turns out to be just one of the cleverly named Vicious Six. She is alongside the aging biker Wild Knuckles (Alan Arkin), the hammer-handed Stronghold (Danny Trejo), half-man-half-lobster Jean-Clawed (Jean-Claude Van Damme), Viking roller skater Svengeance (Dolph Lundgren), and Nun-Chuck (Lucy Lawless), a nun who practices martial arts.

If none of that tickles your funny bone, then this may not be the movie for you, as the opening with the Vicious Six establishes a pretty good baseline for the film’s humor. This is a deeply silly film, and the laughs are all impact-based. There is no social satire, no witty wordplay, and not a single joke that could possibly be classified as a “thinker”. Puns and slapstick rule the day, and visual gags involving the Minions are as clever as it gets. But this isn’t a sophisticated comedy for adults. It’s a children’s film, the fifth entry in a franchise that is now over a decade old. And yet, the majority of the comedy here feels fresh, even somewhat inspired. It’s not every children’s film that takes place so far in the past, and while it may indeed be a shameless ploy for the extra ticket money of parents who got dragged to the theater by their young kids, at least the most groan-worthy references are presented in a wink-wink, “here’s what you were expecting” manner that comes across as gleeful fun as opposed to smug attention-seeking. Just like its title characters, Minions: The Rise of Gru just wants to please everyone, and that quality manifests itself in a near-constant stream of jokes with a very strong hit rate, even for adults.

Mostly, though, this is a film that is as fun to watch as a Saturday morning cartoon. Like the Looney Tunes of yore, the Minions are wonderfully rubbery figures, constantly stretching and squashing and bending in impossible ways that only dial up the sense of silly play that is so important to good children’s entertainment. The world surrounding them reflects that sense of play, too, exaggerating the hilly streets of San Francisco to hilariously vertiginous effect and putting the Minions in charge of an airplane in a sequence that gives Top Gun: Maverick a run for its money in the airborne thrills department. No, there’s no real depth of character or theme here, nor is there anything interesting happening on a plot level – even the callbacks to Despicable Me that ostensibly give this prequel its reason for being are all coincidences and contrivances, nothing that adds anything more than a chuckle of recognition. Oh, that’s how Gru met the mad scientist Nefario (Russell Brand)! Oh, there’s Gru’s incredibly-bad-for-the-environment vehicle! Oh, before he had the freeze ray, he used a cheese ray! Because it rhymes!

Yes, this is the level of jokes that Minions: The Rise of Gru has to offer. It’s certainly not anything new, nor is it anything particularly smart. But it is lots of fun, something that has been in shockingly short supply when it comes to theatrically-released children’s films this summer. It’s very simple in its aims, but since it doesn’t have to bend over backwards to justify its existence, it just gets right down to the business of entertaining its audience, as most Illumination features have always done. This is not a film to gaze at in awe, it’s something to laugh at with your kids as you escape the heat and haze of summer. In times so dark that even children’s entertainment seemingly feels the need to deal with mature themes like aging and generational trauma, leave it to the folks at Illumination to brighten up the summer with this candy-coated blast of pure cartoon silliness. Let your guard down and meet the movie where it’s at, and you’ll enjoy it almost as much as your kids.