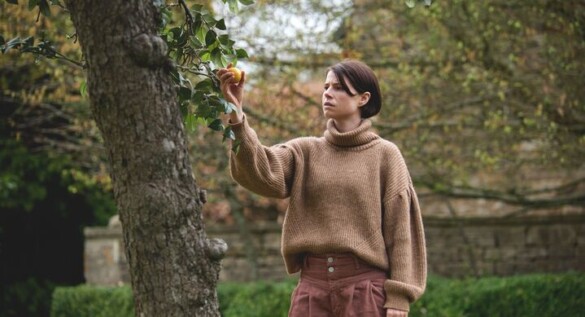 Synopsis: A young woman goes on a solo vacation to the English countryside following the death of her ex-husband.

Although his methods aren’t polished to perfection, writer-director Alex Garland has always found a way to get under the audience’s skin via different styles and mediums (film, tv, and even video games). However, his projects all cover three main themes: identity, creation, and the element of rebirth (or metempsychosis). These themes all intertwine thanks to his surrealistic directorial efforts and the utilization of beautifully crafted yet claustrophobic set pieces, moving across different budget scales and genres. In my opinion, his directorial debut, Ex Machina, has been his best work to date, as it entrancingly examines creationism via the technological advances of artificial intelligence. However, while his follow-up, Annihilation, does contain some mesmerizing concepts, something is lacking in its narrative and presentation, preventing it from becoming a great piece of sci-fi storytelling. Nevertheless, two years after working on his series, Devs, Garland arrives with his third feature, the A24-backed and Jessie Buckley-led Men.

While there are elements that will intrigue fans of the horror genre and the director’s work, a combination of two main factors lowers its chances of being on A24’s shelf of top-notch arthouse horror. In the wake of a personal tragedy, where her husband James (Paapa Essiedu) fell to his death outside their apartment, Harper (Jessie Buckley) travels to the English countryside to start anew – to stay in a place where she can heal. Knowing the filmmaker at hand, the viewer understands that everything will go wrong one way or another. Not only was Harper in the process of divorcing his partner, but while James was falling, they locked eyes, causing a state of pure elongated shock onto her (that moment felt like an eternity). She rents a place with many open green spaces and no neighbors. Upon arrival, Harper is greeted by the owner of the house, Geoffrey (played by Rory Kinnear in one of the many roles he plays throughout the film).

The awkward proprietor gives a tour and helps her out with her luggage, later leaving her so she can get settled onto the property. Harper’s search for reflection and moments of peace is ruined. While taking a quick walk through the woods, a person starts to stalk the poor Harper. Dread, unease, and a sense of inevitability are poured over the screen as the person gets closer and closer. This is the first instance of more to come that will cause Harper to face her internal and external fears, fully formed by the depths of her darkest memories. It’s a feverish nightmare come to life. Men marks the return to Alex Garland’s stripped-back narrative persona, while being his most thematically abstract and emotional at its core. It’s his take on folk horror, a la The Blood on Satan’s Claw, yet with his own distinctive style and religious symbolism regarding creation and rebirth. Some images revolve around the biblical story of Adam and Eve, with the forbidden fruit being the key representation – a lonesome apple tree in the cottage’s garden.

It represents the choice one has of choosing a good or evil action, targeting the loss of innocence after consumption. There’s also Celtic imagery of the Green Man (which represents the cycles of life, death, and rebirth) and Sheela na gig. Both figures and carvings intertwine with the aforementioned concepts, in addition to the conflicts between men and women throughout the centuries. The image alone of these cultural or religious figures creates a sensation of forthcoming trepidation, filling the screen with aversion. That’s one of the fascinating facets of folk horror. There is no clear-cut definition behind all of what’s happening in the respective story, but it all relates to isolation, religion, and the capable power of us humans. However, it does not succumb to all the folk horror totalings, in the way that Rainer Sarnet’s November efficiently does. Instead, he combines those facets with personifications of women’s various apprehensions and gender divisions. This is where Rory Kinnear’s multiple characters come into play. They (priest, cop, stalker, proprietor) depict a different form of misogyny and hostility, from victim-blaming to misguiding her fears.

One way you could interpret these all-familiar faces that Kinnear portrays is that all these horrors could appear in plain sight, on a bright morning, or in the dead of night. In pure Garland fashion, it is up to you, the viewer, to decipher its meanings within the confines of the narrative he’s presenting. His works are worth the analysis, as it leaves more questions than answers and makes space for their own imaginative exploration. For the most part, the questions his projects propose are intriguing. Ambiguity is a weapon he uses in his features to add a more profound sense of dread while you think about it after you have watched it. Thanks to its themes of trauma, despair, and loneliness, Men is effectively unsettling for its first two acts, later switching into a brutal third that I enjoyed, yet will ultimately divide audiences. Nevertheless, it’s the opaqueness and ambiguity that injure the movie in the end. Story-wise, Harper’s arc is never completed, and it feels like it was left in the middle of things.

Even though I liked it, the finale has faults because it’s designed as a means for conversation instead of resolving or providing a rightful conclusion to the lead character’s suffering. Once people begin to see this film, thousands of videos with people explaining the ending will appear. And Garland knows this, as he stated in the press notes for the movie, that it will arouse solid opinions and emotions, both good and bad, depending on the recipient. Apart from those narrative fragmentations, it’s technically well-made and crafted. What shines the most is the work of cinematographer Rob Hardy, production designer Mark Digby, and the score by Portishead’s Geoff Barrow and Ben Salisbury (which includes some vocalizations by Buckley and ambient instrumentations). These aspects help to elevate the surrealistic and grounded horrors and build up a confined sensation as the film concludes. Individual characteristics also contain similarities with Jordan Peele’s Get Out – not thematically, but structurally. However, unlike other films that have tried emulating, these similarities don’t take you away from the experience.

It goes without saying that Jessie Buckley was incredible in this, once again showing she’s one of the best actresses working today. A true marvel at the craft, Buckley’s portrayal of Harper takes you inside her mind as all this despair and dread revolves around her in these horrific circumstances. Equally fascinating is Kinnear, whose multiple performances make you feel uneasy and laugh (it is funnier than you might imagine). Kinnear and Buckley deliver highly committed performances full of cinematic heft that force you to stick with the picture, even if you are pretty entangled with what’s happening at its core. This type of project could have only been crafted in the pandemic because it feels restrained, but that’s how Garland works best (hence, Ex Machina being his best work). Men may have some issues, but it’s never a slog; it does have some missteps while reaching its outrageous grand finale. But, for me, it’s a step up from Annihilation.