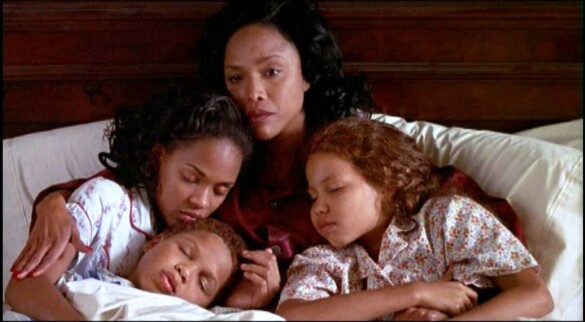 Being a fan of movies is just truly strange. We bark all day about the best movies of the year, even to the point where we engage in absolutely pointless arguments on the internet about our wildly subjective opinions. And for all that noise, most films, even highly thought of ones, become forgotten. Out of your Top 10 of 2015 (or really any year), how many do you really think about? How many last the test of time? And why that one? I bring all of this up because the focus of this column generally, The Criterion Channel, houses many of those critically acclaimed films that, for better or worse, end up lost to the sands of time. Now, this could be depressing, but I love that this offers a chance for discovery. And with that, let’s talk about Roger Ebert’s best film of 1997, Eve’s Bayou.

Eve’s Bayou, directed by first time filmmaker Kasi Lemmons, is the story of the ups and downs (mostly downs) of a well to do Black family in a Creole community in Louisiana. It should be noted that this is not only Lemmons’s debut as a director but as a writer as well. I mention this not just as a point of information, but because her obvious confidence and skill belies that lack of experience. The film mostly follows Eve (Jurnee Smollett) at the age of 10 as she navigates not only growing up, but also dealing with tragedy, possible witchcraft, and inappropriate behavior by family and neighbors alike. The work from Smollett is truly incredible and makes me, just for a moment, question my general dislike of child performances.

But the most interesting thing about Eve’s Bayou comes from a structural perspective. Because there is literally no outside influence seen, we seem to accept even the most dramatic statements and experiences. This also is likely due to the narrator being a young child. She may not yet understand the influence of the outside world on her parents (Samuel L. Jackson, Lynn Whitfield) and her aunt Mozelle (Debbi Morgan). Her world is focused on herself, her sister Cisely (Meagan Good), and their battles for the affection of their father, Louis. But probably most important are her interactions with Mozelle, who also happens to be a seer and likely Hoodoo practitioner. This last sentence is a perfect example of things that we, as an audience, immediately accept.

Mozelle is also seen as a “black widow” due to having her romantic relationships surrounded by death. As I was finishing the film, it struck me that yes, all of her predictions/visions came true, but none of them breaks any laws of nature and, thus, could simply be chance. But we are so wrapped up in a cultural and child perspective that we happily believe that she, and eventually, Eve has the sight. And I think Lemmons does this all on purpose. After all, Mozelle is terrified to begin a new relationship because another seer, Elzora (Dihann Carroll), tells her that her next husband will die as well. However, like all fortunes, there is room for interpretation. She eventually comes to the conclusion that everyone dies, and maybe, just maybe they will die together.

This moment is indicative of nearly all of Eve’s Bayou. There is little that we can truly trust, even the words of family. There is a subplot regarding Cisely silently accusing Louis of sexual abuse that ends up being untrue. This is a gutsy piece of writing, making a child out to be a liar, but it is a pointed moment. Earlier in the film, Eve witnesses Louis cheating on her mother with another woman and is convinced not to speak of it by Cisely herself. Cisely, hurt by her own advances and affection being rebuffed bluntly by her father, finally tells the lie to Eve but swears her to secrecy. It is a haunting portrayal which leads to Eve wishing her father dead to the point of hiring Elzora to curse him to his death.

Louis does die, but is it from the curse, or from something much more pedestrian? The husband of the woman he cheated with is subtly informed of this, yet again by Eve. When he catches them together at the bar, is it because he is hoodoo cursed, or because he was found out by clues from his own daughter. This speaks to the power of belief, so maybe it doesn’t matter much the reason, the tragedy is still true and we should be careful with both our words and our intentions. Eve’s Bayou tells a painful story that is hard to recover from, especially for the family it impacted. Kasi Lemmons conceived, formulated, and accomplished a special film that would not be forgotten.