Movie Review: Matthew McConaughey is the only gold in Gold 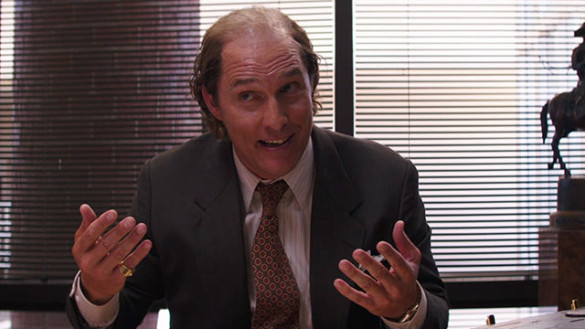 Synopsis: Kenny Wells, a prospector desperate for a lucky break, teams up with a similarly eager geologist and sets off on a journey to find gold in the uncharted jungle of Indonesia.

Gold is a slow-moving biopic about self-absorption and obsession. Despite it’s amateur visual style, the film manages to tell a rather interesting story of one man’s struggle. The movie finds a great on-screen duo in Matthew McConaughey and Edgar Ramirez, but it still loses a bit of steam due to amateur direction from Stephen Gaghan. All in all, Gold is an entertaining biopic with great performances and an interesting story.

Gold surrounds the life of Kenny Wells (Matthew McConaughey), a prospector searching for his big break. He finds this big break in Michael Acosta (Edgar Ramirez), a geologist who firmly believes that there is a large gold mine in the Indonesian jungle. Through Wells’ scrambled funding, the two catch their big break and discover the largest gold find of the decade. Swerving through some of the most powerful offices on Wall Street, Wells and Acosta find out that keeping the gold proves more difficult than finding it.

The story does take quite a while to get going. By the time we are introduced to all of our main players in the film, the script still takes its time in setting up the plot. Which isn’t necessarily a bad thing, since this makes the movie’s pay off much more exciting. Once we do get past the slow moving portion, the film does get rather interesting. A lot of different characters come into play and attempt to force their way into Wells and Acosta’s business. The interactions during the second act of the film prove to be possibly the most exciting aspect of the film.

McConaughey delivers another intriguing performance to couple with this stage of his career. Fully immersing himself into his character, McConaughey is just pure bliss to watch on screen. Adding another “off-the-wall” character to his repertoire, McConaughey beautifully interacts with every other actor opposite of him. The chemistry that is shared between him and Ramirez is clearly much more radiant than the others, but the general interactions are what make the film. Despite the direction of Stephen Gaghan, the performances are believable and powerful.

This movie is Gaghan’s first big budget project and with that said it certainly does feel that way. Some of the camera moves feel unmotivated, a few of the edits feel out of place, but most of all the entire film seems to be a tad bit jumbled. Once Wells and Acosta discover the gold mine, the film moves from location to location nearly throwing the audience off track. There are several moments that cause the audience to have to take a step back and re-think what
has been going on. Even thought the events in the film are exciting and hold a lot of power, they feel almost discombobulated. Certain scenes show up either too late or too early and we cannot fully get a grasp on the emotions Gaghan seems to be going for.

Gold finds most of its power in the talented pair of McConaughey and Ramirez, but falls short due to the amateur direction of Gaghan. Gaghan knew that he wanted to tell this story, it just feels like he did not know how to tell it. Even though the film does have a rather slow pace and drags its feet from time to time, it still conjures some excitement, especially within the performances.