Movie Review: ‘Marcel the Shell with Shoes On’ is a Shell of a Great Time 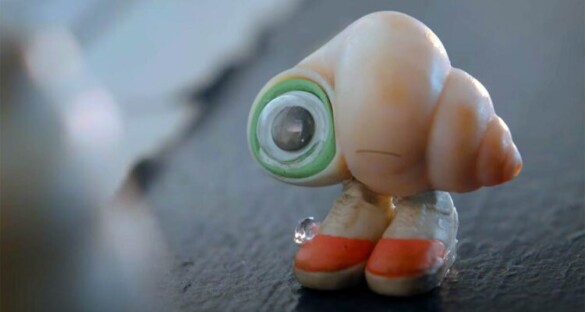 Marcel the Shell with Shoes On will go down as one of, if not the, most adorable film of the year. If you’re familiar with the Jenny Slate-voiced character from its very popular YouTube videos, you’ll already know what to expect, but here’s some background just in case. Marcel is a mollusk with one googly eye on the right side of his shell, and of course he comes with a pair of shoes on. His unique appearance is endearing on its own, but his quirky personality and funny quips make him all the more charming.

The beginning of the film sees Marcel’s friend Dean, the same character from the YouTube videos, is making a “documentary” about Marcel’s life. In what becomes very meta, the footage captured in those first ten minutes is essentially regurgitated to make those original videos that became a huge sensation online over a decade ago. We learn that Marcel’s family, and the community in which they lived, had been taken away accidentally by a couple who had left their home. Marcel and his grandmother Nani Connie are left behind to survive on their own.

In a series of humorous sequences, we see how Marcel and Connie have evolved to live on their own, including the innovative use of a blender to help gather food. Connie has become a master gardener thanks to a few books left in the house. Marcel has learned to roll around in a tennis ball in order to get from one place to another more quickly. Without the support of structure and their community, they’ve thrived off of limitation and adaptation. However, the sadness and loneliness they feel still lingers. Marcel has crafted a memory board where he’s carved out portraits of his missing family as a way to remember them. When they talk about what happened to their family, or how they’ve coped, there’s understandably a sadness to it, even if Marcel’s quips offer a few laughs in between. One of the better depictions of this is when Dean shows us Marcel and Nani Connie watching the TV show 60-Minutes, which has become one of their coping mechanisms. It’s surprisingly funny to see how this often very serious program has become something of comfort. There’s another captivating moment in which Marcel creates an “ice-skating” surface out of dust in order to lift Nani Connie’s spirits, which is very effective, only for it to be abruptly interrupted by the horror of a squirrel in the house. It’s somewhat jarring, but the turn from joy to uneasiness is incredibly seamless. And that tonal balancing act is what makes the film truly wonderful.

Marcel the Shell with Shoes On is directed by Dean Fleischer-Camp, a name most may not be familiar with as this is his feature debut, however he did direct the short films this is based on. It’s truly impressive how he’s able to blend poignancy with blistering dialogue and hysterical visual gags. It’s not an easy trick to pull off, especially in your debut, but Fleischer-Camp does it impeccably. My personal favorite is the scene featuring Marcel on the phone with 60-Minutes producers, a moment that could be life-changing for him, but on the right side of the frame is Nani Connie standing on the laptop keyboard standing on the “Z” key. The incessant Z’s being reflected on the Word-doc is so good. A simple, yet hilarious visual. It cannot be overstated how funny and warm Marcel is throughout its entirety. But for all of its cuteness, there’s an equal about of emotion and humanity to the film regarding loss, grief and the importance of community. The abundance of playfulness here never compromises the film’s pathos.

Dean Fleischer-Camp’s tone management is astounding on its own, but complimented even even more beautifully by this marriage between art and curiosity we see in Marcel’s journey. In those opening scenes, as they are making the original YouTube videos, Marcel isn’t fully aware of what Dean is doing and it elicits some really funny reactions out of him. Initially, it’s just this trivial documentary about their day to day lives. But then they explode and everyone is endeared to Marcel, eventually sparking this wonder in him, a thirst to see if his new found fame could lead him to discovering his family once again. It’s really fascinating to see how those crossroads of art and hope intersect, giving life to Marcel in a completely new way. The reality is, though, that it’s just a fantasy. Finding his family again is maybe just wishful thinking and something that may never come to fruition. Even with the help of the internet, which wasn’t always that helpful, as celebrity culture became a hinderance for Marcel. It even begins to endanger Nani Connie. These videos may have sparked a tender curiosity at the start, but hope begins to slip away from him until Nani Connie comes to the rescue. I will not give any spoilers away, obviously, but when you see it…it’s gorgeous.

Not enough can be said about Jenny Slate’s vocal performance. Her distinct voice could have been a distraction, but her quirkiness and specificity for Marcel is the star of the show. The film is reliant on you being as endeared to Marcel as everyone else is around him in the actual story. Without Slate, who knows if that would have worked? But she’s terrific and you’ll fall in love with him immediately. The great Isabella Rossellini voices Nani Connie, and she’s quite spellbinding as well.

Marcel the Shell with Shoes On is unlike most movies in the A24 cannon. It’s lighthearted and eccentric, but the craftsmanship here is genuinely great. The cinematography is especially vivid. It’s thematically stimulating in its ideas of loss and community, but even more arresting in how it examines the concoction of art and media having a tangible influence on the choices we make in our lives. The emotion in all of that is affecting. It may be different, but it’s easy to see why A24 would love something like this. Will it end up as one of the year’s best films? It’s hard to say. It probably should be in that conversation. At the very least it’ll end up as one of the best surprising films of 2022.