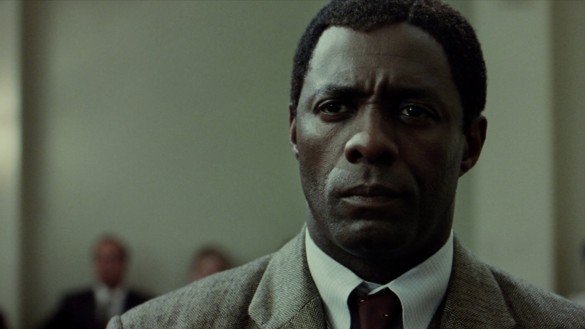 Synopsis: A chronicle of Nelson Mandela’s life journey from his childhood in a rural village through to his inauguration as the first democratically elected president of South Africa.

DIRECTION
Justin Chadwick certainly, and quite unfortunately, had good timing with the release of Mandela: Long Walk to Freedom which will put this movie, maybe unfairly, right into the path of prominence given Mandela’s recent death. However for Chadwick, while he brings us a great representation, there are some pieces missing that ultimately leave you a little hungry still. The aesthetic of South Africa was captured beautifully but also arduous at the same time. The death scenes and massacres were shot (horribly) well but somehow feels a bit local. We don’t see the grander scale nor the kind of bigger implications it would have until later on in the film. However, the main essence of Mandela is here with layers of a leader that is for sure one to look up to.

SCRIPT
The script here is mostly through the eyes of Mandela himself and as a script coming from his biography, it makes sense that would be the case. The big problem with that however, is that we don’t see the big picture in really what makes Mandela’s story so great and powerful. We see some things about him, that may not be honoring or respectful, but could be true to the real person which is what the film needed too. There’s an interesting story arch that involves Mandela and his inner circle that helps motivate the anti-apartheied movement which was pretty engaging. Most of the other characters lack depth, but when they are screen are pretty intense giving you the sense of the consequences to them personally. One of the bigger controversies is how Mandela’s wife, played by Naomie Harris, is portrayed as it can be a little controversial depending on your take on it. She certainly has more hatred but later on we see some of her motivations that drive her but she does have this balancing act that is mostly successful. The story overall could of been a little more tightened and, if given, a bigger scale, would of given the viewers a bigger understanding of what Mandela did. This script mostly assumes you know the details leaving it not very accessible. But this is a story that needs to be told and it’s one of a man whose legacy will live on forever.

PERFORMANCES
Holy good God is Idris Elba is incredible. This is the performance of a lifetime for Elba and perhaps may (and should) have awards implications as the year comes to a close. He absolutely carries the film, and where the script lacks, he is captivating on every level which will keep you engaged. He brings Mandela to life on screen, and for those who aren’t familiar with the details, Elba gives us a sense of what it was life for Mandela on some levels (I’m sure it was way worse in real life). He’s strong in every sense and, in a simple sense, he was absolutely compelling. As mentioned, Naomie Harris was incredible too as Mandela’s wife and in some ways, her performance was just as crucial to the film. The dynamics she brings to the consequences of her character are pretty magnetic. Most of the other supporting actors were good and added some nice touches, although they don’t have as much to do. This is the Idris Elba show and he delivers big time.

SCORE
Wow, what an amazing score by Alex Heffes. This was unexpected for a film like this but this score is pretty intense when it needs to be but also subtle and heartbreaking when it needs to be. It’s all over the map but in all the best ways possible. The music lifts the intensity, which was really great and it absolutely adds some great layers to the movie. It’s a score that I would recommend outside the film too, it’s actually a good listen to. Not too mention, the song Ordinary Love by U2 is really great and a fun song.

FINAL THOUGHTS
The story is pretty slow in some areas and does draw out some areas that weren’t necessary. The story of Mandela is an amazing one, and while, we get to see the character well here, we do miss out on some of the grandness that makes his story so compelling. There are some scenes here that are very powerful though and it’s one worth seeing, if only for Elba’s performance. He was absolutely incredible and an actor I hope to see more in roles like this.