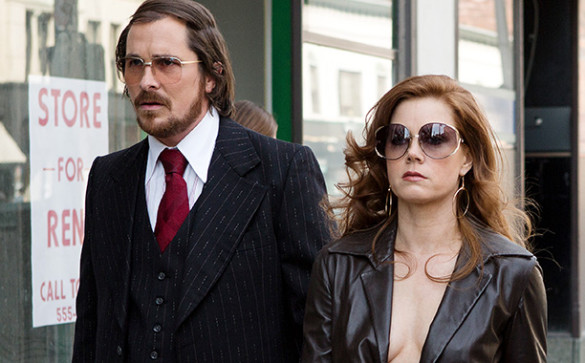 Normally, an established director takes a bit more time off between releases. However, don’t mention that to Hollywood darling David O. Russell, as his latest effort American Hustle comes just one calendar year after the much-heralded Silver Linings Playbook. The latter film was revered and rewarded by audiences and critics alike. Much like Silver Linings, American Hustle’s cast is superb and features actors and actresses familiar to the acclaimed director. However, while there are a slew of familiar faces and elements in Russell’s films, the narratives feature varying structures which assures his catalog can take on more than one genre without losing quality. In American Hustle, Christian Bale is Irving Rosenfeld, the primary focus of the movie. Rosenfeld is a con man with years of experience and a mafia-like life with a wife who requires the patience of a saint. Russell is able to make films which feature memorable characters and pull out the best in his cast. Much like he continues to do with Amy Adams and Robert DeNiro, Jeremy Renner gets added to that list of talent that shines brighter under his direction. It’s not difficult to understand why talent sticks with him regardless of what the story is about. With this being the third film Russell has directed this decade (and a fourth feature film already completed), Russell is making up for lost time and hitting it out of the park each time.

The story is based on the ABSCAM operation run by the FBI in the 1970’s which targeted public corruption and lead to the convictions of seven U.S. Congressmen as well as some state and local figures in the New England area. Our story is seen from the perspective of Irving Rosenfeld (Christian Bale), a con man who fronts as a dry cleaning businessman and art dealer. Rosenfeld ends up partnering with the lovely Sydney Prosser (Amy Adams) to embezzle money from individuals desperate for loans, and ends up falling prey to undercover FBI agent Richie DiMaso (Bradley Cooper). This is where our lead characters get involved in ABSCAM, as DiMaso offers them immunity if they use their conning skills to the benefit of the operation. In the end, the story explores American culture and values as well as what we are willing to do to succeed (whatever that may mean to each of us). The script isn’t necessarily concerned with the narrative as much as it is with its players, and ultimately that’s what makes this movie exceptional. To appreciate just how great the character development is here, one can think back just a week to The Hobbit: The Desolation of Smaug (a film that is terribly inadequate at delivering on the qualities of its already-developed characters). We have fun watching these characters unfold, and enough profundity is thrown in to warrant this script one of the year’s best.

While a script with fun, fleshed out characters might seem like a home run, the movie could have played much differently without the inspiring performances from a host of talents. Christian Bale gained fat and looks pretty disgusting as Irving, although I admit that I was fascinated with the puzzle that he assembles to appear to have hair. It’s hard to even recognize Bale at times, and his range is much broader than what I have been used to seeing. His stone-faced, confident performance in Out of the Furnace was good, but here he is great. Bale is able to convince us that while individuals can do terrible things, these “scumbags” are still human and possess good intentions in the depths of their heart. Amy Adams plays Irving’s partner Sydney, a former stripper who pretends to be British so that she can sound smarter than she really is. Capitalizing on her unique energy, Adams has never been this sexy and powerful. Her charisma oozes off the screen into the air with every shot wherein she lives. Adams and Bale are complemented with many other great performances, notably Jennifer Lawrence’s Rosalyn who is Irving’s wife. She is the beautiful and tragically hilarious trophy wife that is always right, and Lawrence plays her perfectly. The interaction between characters comes as small events as opposed to just normal scenes. Bradley Cooper and Jeremy Renner are both very solid in their roles, and surprising minor roles from Louis C.K. and Robert DeNiro fill out the impressive list of stars who delivered.

Another strong Danny Elfman score, and one which will likely garner critical praise this award season. The addition of Duke Ellington into the narrative allows for Elfman to provide quite a timely score as well as throw tracks in from Elton John, Donna Summer, and The Bee Gees. I especially enjoyed the Electric Light Orchestra tracks, as well as the addition of Live and Let Die, taking a piece from the James Bond universe.

American Hustle might be the most entertaining film of the year for many, however it lacks the elements necessary to take it to the top tier of similar films such as Boogie Nights, Goodfellas, or The Departed. Years after last viewing those films, I can remember sitting wherever I was watching a scene unfold, and just two days after seeing American Hustle, I barely remember a lot of it. However, I will remember these characters and performances, and for that reason alone this has to be mentioned when talking about the best of 2013 in film.