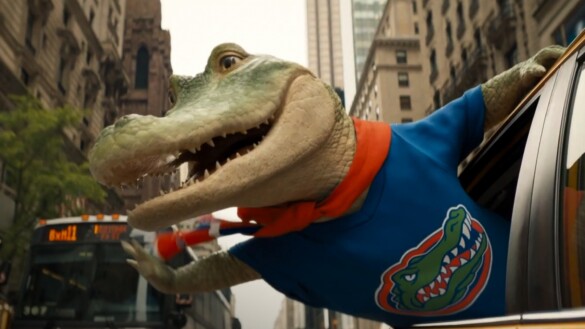 Synopsis: Feature film based on the children’s book about a crocodile that lives in New York City.

After months of anticipation, Lyle, Lyle, Crocodile is finally here, and it is a wild ride. There’s actually no way to properly describe it without you flocking to the theater and seeing it for yourself, but it feels like an amalgamation of last year’s dreadful Clifford the Big Red Dog live-action film, Tom Hooper’s Cats, and The Greatest Showman. These are all movies I don’t like, so I’m surprised to say I found Lyle, Lyle, Crocodile weirdly charming, mainly because of how committed the cast is to the material.

Within minutes, Javier Bardem and Shawn Mendes are dancing their way to a montage number, in which we see Hector P. Valenti (Bardem) training Lyle (Mendes) on how to perform, through the excessive music of Benj Pasek and Justin Paul. Yes, they wrote La La Land, but they also did Dear Evan Hansen. I’m mixed on them as songwriters, but most of the numbers here are incredibly catchy, especially its opening number “Take A Look At Us Now,” which honestly could end up with an Oscar nomination. I’ll say it’s better than every song in Dear Evan Hansen and “This Is Me” from The Greatest Showman.

And Bardem’s performance as Valenti is a real trip, because it’s completely against everything he’s played in his career. Bardem is usually known for playing dark and brooding villains, such as Anton Chigurh in No Country for Old Men and Raoul Silva in Skyfall. But his portrayal of Valenti is filled with such exuberance and earnest charm that I couldn’t help but fall for him every single time he would be on screen. It’s funny how most people watched the trailer and were confused at his presence, but he’s truly the best part of the movie. It’s another great part for Bardem to showcase his versatility and range as an actor, and prove to the world that he can play more expressive characters than antagonists, or brooding protagonists like his approach to Stilgar in Denis Villeneuve’s Dune.

It’s also impressive to see how devoted to the movie Constance Wu and Scoot McNairy are as Katie and Joseph Primm, parents to Josh Primm (a wonderful Winslow Fegley), especially when they have to interact with CGI Lyle. One scene in particular, featuring Katie and Lyle baking and dancing through another catchy song, had me cackling so hard that I couldn’t believe Constance Wu would ever do the things she does in this movie. It was even funnier to see it with a rapturous audience, who got excited at the sight of Lyle on screen and were in an utter state of disbelief every time the crocodile would do something so preposterous that you have to ask yourself how on earth did this movie get greenlit.

I’m not going to spoil anything, but Lyle is at times immensely charming (Mendes’ vocals are terrific) and very funny, but downright unsettling and just plain weird during other sections of the movie. It’s an amalgamation of weird and wonderful that doesn’t always work but is always a compelling watch. Its performances are too good to be in a movie like this, especially with a CGI crocodile accomplishing the weirdest things imaginable, such as convincing Josh to dumpster dive with him, among one of the many hijinks our protagonist gets into throughout the film.

The rest I won’t reveal, you’re going to have to see for yourself just what adventures Lyle has with Josh, but it’s wilder than I ever thought possible. And while the core of the movie remains a highly-spirited theatrical experience, it’s a shame how most of the plot is highly unimaginative and predictable. The main antagonist, Mr. Grumps (Brett Gelman), represents every single trait of the “Bad Neighbor,” who hates any ounce of disturbance and will do everything in his power to kick the Primms out of their home. While Gelman is fun (he also wears a Cats shirt at some point which made the older person in the theater howl with laughter), the character itself is boring to watch.

And the plot itself is amazingly clichéd. Lyle has stage fright and can’t perform in front of an audience, even if he sings extremely well when he’s with Hector, Josh, or Katie. From this sentence, you can already guess how it’ll end. I won’t even say it, but yeah. It’s what you think.

Because of this, Lyle, Lyle, Crocodile won’t be remembered as a great film, even if I had the time of my life watching it. When the film aptly ended to the sweet sounds of Elton John’s Crocodile Rock (of course), the audience cheered at this magnificent achievement in the history of cinema. And it truly was momentous–Javier Bardem showed the world he is more than just a brooding actor, which bodes well for his performance as King Triton in the live-action remake of The Little Mermaid next year. That alone was worth the price of admission.