Movie Review: ‘Like A Boss’ disappoints despite low expectations 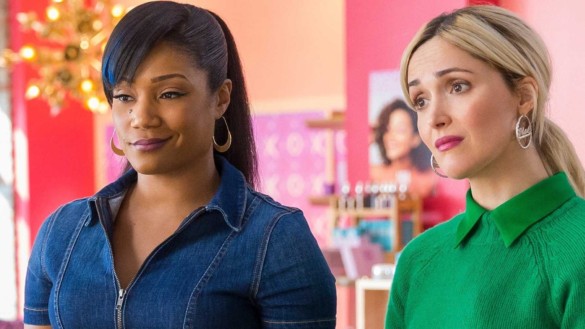 Synopsis: Two friends with very different ideals start a beauty company together. One is more practical while the other wants to earn her fortune and live a lavish lifestyle.

A cast alone does not make a good film. There are so many moving parts, that it is sometimes silly how much stock we put in actors, or even directors. Even Scorsese made New York, New York. But we all have that one actor or actress for whom we will watch terrible movies just for a glimpse of them. Some of us have more than one, and that can lead us to some dark places. But every great once in a while, despite all early indications, a movie will surprise you. You know, it looked genuinely awful in trailers and early reviews were abysmal.  And yet, you enjoy it! Personally, I can think of at least one movie every year that fits this description. Like A Boss starring my personal favorite Rose Byrne and Tiffany Haddish is absolutely not a surprise.

When talking to people about this movie in the lead up, terms like “boring,”  “unoriginal,” and “not funny” were hurled in my direction. No joy is taken in the fact that these descriptors are completely correct. Just like there are no perfect movies, Like A Boss is not devoid of charm, at least not completely. There are probably about 20 good minutes buried in the runtime. All of those minutes are either at the very beginning at the very end. Unfortunately, that leaves a good hour in the middle that is missing an engaging story, interesting visual choices, and most damning of all, comedy.

To say that the script could have used another edit is insulting to films that get close to being good. In any buddy comedy in which there is a “breakup”, a certain suspension of disbelief is needed. But we can only go so far. It is hard to imagine a world in which an audience member has bought in to this supposed argument between our two leads. There is a nice message about female friendship and that connection, but again, the script is so subpar that it must hammer this point home, repeatedly.

The cast is game for anything, which is why some of the bits work. When best friends Mel (Byrne) and Mia (Haddish) are hanging out together, either in their house or with their friends at a baby shower, Like A Boss is genuinely fun. But of course, this is before the plot kicks into gear. The movie screeches to a halt when our villainess Claire Luna (Salma Hayek) enters the scene. Cartoonish evil is fine, especially in a comedy, but this performance is wildly out of tone with everything else on the screen. Audience members may find themselves staring at this caricature as an oddity, but certainly not an entertaining one. The supporting characters, especially Barrett (Billy Porter) are a welcome distraction to the aforementioned plot, but that is all they are. And later on, Barrett and Sydney (Jennifer Coolidge) are ground under the gears of that plot in ways that lack any form of human sense.

It is a real shame to see this much wasted talent on display for 90 minutes. As thoughts return to the baby shower sequence, which is genuinely funny, it makes one wonder what a film focused on all these women could have been. Sure, we’ve seen similar things in movies like Bridesmaids, but we can always use a buddy comedy that is female focused, even now.

Maybe too much to expect from a January release, but would it have killed Like A Boss to be funny? With this group of women in a different movie with a funny script, it is easy to imagine a surprise runaway hit. But not this year, not with this movie.