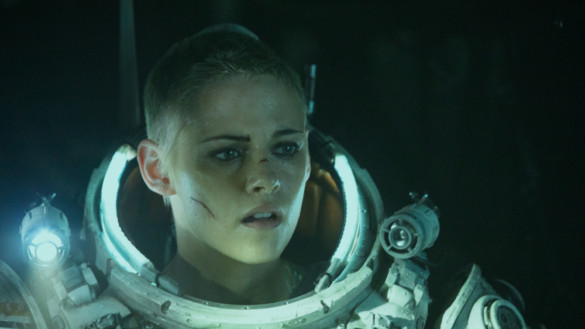 Synopsis: A crew of aquatic researchers work to get to safety after an earthquake devastates their subterranean laboratory. But the crew has more than the ocean seabed to fear.

There’s nothing better than seeing films with new or original ideas, especially horror or action-thrillers. Underwater is a mostly original thriller, with a few borrowed ideas, that makes for an interesting start for 2020. It tells the story of the crew of an underwater facility located in the Mariana Trench and their struggle to survive a catastrophic event seven miles below the surface.

The movie jumps right into the action – there is almost no story or character building before things go awry, save for a newspaper article style exposition dump in the opening credits. Generally, not having any story telling is an issue, but I think it works in this film and immediately sets the tone for what’s to come.  Kristen Stewart stars as Norah, a mechanical engineer, capable of keeping her cool and quick thinking while the station implodes around her. There is a small supporting cast of (mostly) interesting characters: Vincent Cassel is the fearless leader and man with the plan, Captain Lucien. Jessica Henwick is biologist Emily, engineer Liam Smith is played by John Gallagher Jr, and rounding out the team is comedic relief Paul, job unknown, who is unfortunately played by T.J. Miller. With the station quickly crumbling around them, the group must make an impossible trek across the sea floor in hopes to reaching the last remaining escape pods.

I went into this screening with relatively low expectations and ended up enjoying myself. Underwater is an extremely tense, isolationist, claustrophobic thriller. It was so nerve-wracking and suspenseful my body actually hurt after the movie from being tensed up for 90 minutes. It’s getting many comparisons to films like Alien (1979) or The Abyss (1989) which I can see- strong female lead, alone, underwater/in a hostile environment… There were a few scenes that even reminded me of Alien, but overall Underwater is its own movie. What it does best is manipulate its audience with the use or non-use of sound. The lack of music and any sound beside the actor talking or breathing really puts the audience down there, on the seafloor, alone, waiting for something to come get them. It’s a brilliant technique, that if done well, elevates the film. I’ve seen it done in many horror or space movies and It’s very effective. They managed to get some storytelling done without much time for characters to explain their backstories or have any real conversations. You get clues through out the movie by reading things on walls and screens, paying attention to the little things characters do or say, and I think it works for this type of movie. Long monologues wouldn’t make sense in an “against-the-clock” thriller. It’ definitely a film I want to see again, at home, when I can pause and rewind to see anything I missed in the theater. I also really liked Kristen Stewart, she looks awesome with the shaved head and I can’t wait to see her in another action flick.

My biggest complaint about Underwater is with its editing. It was hard to watch or keep track of what was going on at times, especially during scary or action-filled sequences. There are a few scenes where characters are dragged or move around quickly and it’s so blurry or choppy it’s easy to lose track of who went where and how it happened. It’s also fairly obvious that scenes were cut to keep a PG-13 rating. The positive side of that criticism is hopefully there’s an unrated director’s cut in our near future! The only other negatives I could come up with was the lack of character development for Smith (John Gallagher Jr). His character wasn’t particularly important to the overall story, but I’ve been in love with Gallagher since The Newsroom (2012-2014) and was excited to see him in something again (and with a beard!) His character is hinted at having some relevant backstory with other characters so I wish they would have given him a little bit more to work with. My other issue is with T.J. Miller. Yes, he has moments of comedic relief, but he’s a “problematic” casting choice as it’s difficult to separate is off camera problems with seeing him on screen. That being said, his character’s storyline isn’t all sunshine and rainbows (can’t get into more details without spoilers…) So, if his casting is the only thing preventing you from wanting to see Underwater, I recommend giving it a chance, he doesn’t ruin the movie.

To wrap up, Underwater is a welcomed addition to the sparse but cherished “aquatic thriller” genre. It borrows themes and ideas from its predecessors but makes its own way with a strong female lead, interesting supporting cast, and intense underwater sequences. I understand it may not be for everybody, it suffers from choppy editing and poor casting decisions. If you’re on the fence and thrillers are your thing, I highly suggest giving it a chance on the big screen. In the future I believe it may develop a following – especially if I’m correct about a possible unrated director’s cut!