Movie Review: ‘Ava’ is a Puzzle Missing All its Pieces 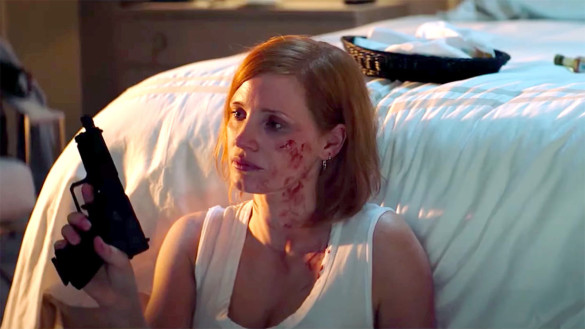 Synopsis: An assassin becomes marked for death by her own black ops organization after questioning orders and breaking protocol.

When I saw the trailer for Ava, I believe, late last year; I instantly was intrigued for many reasons. Mainly for Jessica Chastain in a kick-ass spy styled role where I could root for her and see her tap back into a genre she’s quite good in (for those who haven’t seen her in The Debt, I encourage you to do so). You also had Joan Chen, John Malkovich, Colin Farrell, and Geena Davis, an excellent cast. But then it seemed to become a plague almost in the realm of being released. It had a late 2019 release date, and then became delayed to early 2020 and then delayed again before COVID happened. So it was postponed again, and then it became randomly dumped onto VOD, then quickly deleted and became unavailable. When I said I wanted to review it whenever it came out, we contacted to distributor to see if they had any screeners, and they weren’t giving any out. This is never a good sign for a movie, as it means they have lost faith in the project. So then I hoped I would be able to see it eventually and then review it here, and low and behold, on a random day last week, as I walked back to my apartment with my Chipotle in tow, I passed a Redbox and what caught my eye but Ava. There she was, just waiting to be picked and watched and reviewed, so here it is.

Ava tells the story of a woman who is a trained assassin whose job it is to travel to whatever destination is assigned to her and kill her target point-blank, which she does flawlessly except she likes to break protocol by asking the victims- “Why does someone want you dead? What did you do?”- which is a big no-no that she’s been reprimanded for in the past. The nice thing about the film is that in these main parts of the assassinations are where we get to truly see Chastain shine in a genre she dominates effortlessly. It’s as if she was “born to play” action specifically, which is funny because I haven’t seen a single genre she can’t play. The best way I can describe her in big gun shooting and physical fighting scenes is like an ice skater in the Olympics, graceful, beautiful, and absolutely kick-ass. I found myself thinking throughout these scenes that she could and should play Jane Bond if the 007 series ever took that route. The action scenes here are really something spectacular, and it’s not just Chastain that comes through here, it’s also Joan Chen who makes badassery look so cool, it’s John Malkovich who doesn’t let age make the fact that he can kick ass, it’s all-around solid except Colin Farrell who for some reason makes it fell “off” and that pains me to say as I’ve been a massive fan of Colin’s since 11-year old I found his homemade tape….

Anyway, while the action scenes here work and are interesting enough to keep one entertained, the rest of the story feels like something is “missing” and what I mean by that is the backstory to the character of Ava. We find out that Ava is a recovering alcoholic who comes from an extremely troubled past in Boston who hasn’t seen her family in 8 years and comes home to reconcile with her mother and sister, who is now engaged to Ava’s ex-boyfriend, played by Common. Ava’s mother is played by Geena Davis, who seems to be having a blast with such a cynical character, and then her sister is played by Jess Wexler, who I’m pretty sure would be the shoo-in for Razzie’s Worst Supporting Actress award for this. I haven’t cringed at line delivery’s like this in a LONG time.

Now with all this backstory here of a troubled past, you would think that Ava would be an entertaining ride, and like I’ve mentioned above, half of it is in the form of the action. Still, for some reason, the rest of the movie just doesn’t mesh with the tone of who she is and therefore feels very forced and uninteresting. The issue here, too, is that the Boston chapters of this movie feel like filler if there ever was a pure definition of filler and feels very unnecessary. This isn’t great when it takes up about 60% of the movie, which is a bummer because the potential of how Ava became Ava could be so compelling but instead were being force-fed a narrative that is so generic and just plain bad. Bad girl on the wrong side of the tracks becomes top assassin? Drew Barrymore did this backstory in its entirety in Charlie’s Angels. The only plus side to the Boston chapters of this story is Joan Chen, whose character is a lot of fun despite her limited screen time and who deserves more. PUT JOAN CHEN IN MORE MOVIES, YOU COWARDS!

Listen, I love Jessica Chastain. She is genuinely one of the best actors to breakthrough in this last decade. Not to mention that she should have a minimum of six Oscar nominations already with at least four wins for The Help, Miss Sloane, Molly’s Game, and The Tree of Life, but the woman needs a new agent because she needs a HIT so badly. She hasn’t had a hit based on her being the lead alone since Zero Dark Thirty almost ten years ago. None of her movies have “stuck” at the box office, which is a shame because Miss Sloane and Molly’s Game were terrific. IT Chapter 2 wasn’t “her” film but was a hit, and with The Zookeeper’s Wife, Miss Sloane, Molly’s Game, and Woman Walks Ahead bombing and now Ava being dumped to VOD, she’s in SOS mode here career-wise. I genuinely hope she can pull something out, cause she deserves it.

In the end, this movie feels like a 1000 piece puzzle that you assemble with ease on the sides of it, but you find out you’re missing 200 centerpieces of the mystery, and you just give up. I understand why Ava was forgotten about and just sent directly to video because, honestly, it’s not good. Is it fun? Sure, it is, and Chastain doesn’t need to prove herself anymore because she’s capable of the work, but this would’ve been another bomb at the box office for her, and maybe this dump to video actually saved her a bit? Who knows, but seriously Jess, you need a new agent and STAT because you deserve so much better.