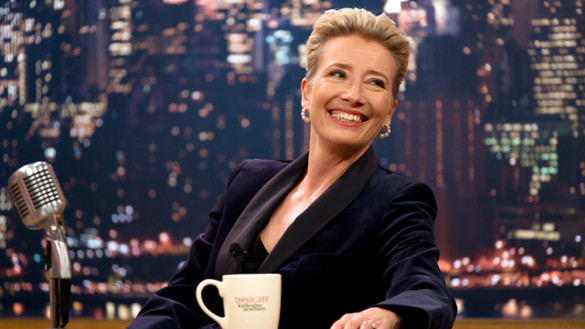 There’s a moment near the end of Late Night (directed by Nisha Ganatra) where upstart writer, Molly Patel (Mindy Kaling), stands up to the legendary late night show host Katherine Newbury (Emma Thompson) after taking harsh treatment from her for most of the film.

To my millennial eyes, this scene was a release. I’ve seen older business people treat me differently because of my age. At the same time, there are many scenes where my millennial point of view is put right in the crosshairs as people point out Molly’s love of catharsis and her overbearing first impressions.

This gets to the heart of what makes Late Night such a powerful film. It is incredibly perceptive about age differences and how they affect the workplace. More than that, it is perceptive about differences in general – whether they’re from gender, race, or you take your pick. The film’s script (written by Kaling) goes for all of the above.

We meet Newbury first. She is a British late night legend, known for hosting Tonight with Katherine Newbury for many years. Her calling card is her exceptionalism, though that has also put her in a decade-long dry spell by the time the film begins. In being above the type of comedy that appeals to the masses, she has isolated herself – and the ratings have begun to show it.

She looks for a reason why this could be. One of her writers gives her one idea – that Newbury hates women. She is so taken aback by the comment that she fires him on the spot. But the fact remains that she has no women on her writing staff. Katherine decides to change that, and she demands that they hire a woman writer.

When we first meet her, Molly is working at a chemical plant – not a factory, as she points out repeatedly. There, she pursues her dream of being a comedienne by performing “stand-up” over the chemical plant intercom. Her joke about solutions slays.

This gets her an interview to be on Katherine’s writing staff. Though Molly has no experience, Katherine is dead-set on adding a woman, so Molly is chosen. The men in the room scoff at this clear “diversity hire” but Molly pushes forward.

This film is well-written, overall. Kaling does a fantastic job of setting up these age, racial, and gender differences and plumbing them for narrative depth to her comedic story. My main quibble with the script, though, is how it struggles with transitions. I had the feeling that the film never really got into a flow, which was unfortunate given the powerful material. At some points this is the fault of the writing. The most egregious example of this was a blatant product placement where Molly brings McDonald’s to her co-worker and comments on the McNuggets, then just moves on. At other times, it’s an editing flaw – like the scene where network president, Caroline Morton (Amy Ryan), is shown being angry on the phone and then we quickly cut away. This doesn’t really tell us anything new, and it just halts the progression of the story. Because the film did a good job of setting up its characters, we already know that Morton will be angered by what happened on the show. We don’t need an extraneous scene to tell us that.

Also, I can’t say I fell for “I hope I’ve earned the privilege of your time” as a catchphrase. This is how Katherine Newbury ends each one of her shows. An emotional moment near the end of the film uses this phrase in a new way, but it just didn’t land for me.

Those are mostly small critiques in the grand scheme of things, though. I these issues keep Late Night from being a truly great film, but there simply aren’t many truly great films. As it is, Late Night is a really good one, and that’s to be applauded.

As the film progresses, the specter of losing her show hovers ever closer over Newbury. Morton, her boss, even has a replacement ready to go. His name is Daniel Tennant (Ike Barinholtz), and his comedy is of the frat-boy, lowest common denominator variety. In multiple scenes, we see Newbury scoff at his brand of comedy. Yet, he is the one who is set to take over her show. One of my favorite aspects of the film is how it handles this, yet another major divide.

The setup is that Newbury is not “mainstream” enough. In her pursuit of excellence, she has alienated herself from a large audience. However, rather than simply adopt or even look down on the type of broad comedy that Tennant employs, the film finds redemption for Newbury through authenticity. Mainstream doesn’t have to mean dumb. There simply needs to be a connection. Amid many powerful messages in the film, this may have been my favorite.

Overall, this is an enjoyable comedy with a lot of heart. More than that, it has something to say. Not every film these days can combine all of that into one piece, but Kaling and Co. do it very well here. It stops and starts at times, but we definitely need more films like this one.