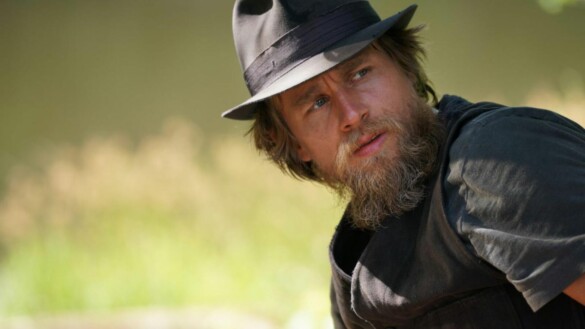 Synopsis: A disgraced ex-cop seeks solace by moving to the woods, but his quiet life comes to an end when a private eye recruits him to investigate a murder.

Charlie Hunnam is the legendary, but disgraced former cop Charlie Waldo, his name travels even faster than he does on his trusty bike. Mel Gibson is the famed British actor, Alistair Pinch – a caricature of your typically flashy British stars of a bygone era – under suspicion of killing his wife. I mean, on paper this has the makings of a quirky little mystery film; one with a blossoming bromance of questionable accents, one that has a sexy aura led by British heart-throb Hunnam, and the thing is, it does try to be all those things. Last Looks desperately attempts to be stylish, and its characters rustic, but the inconsistent humor and satire-like setting often force it to become bogged down in its own fantasy.

Don’t get me wrong, this kind of genre is a hard nut to crack, and there are clear attempts to use certain films as its blueprint for success, films in the mold of Knives Out; with its larger than life cartoonish protagonist; The Nice Guys with its own blossoming bromance of clown-like scoundrels; even Hail, Caesar!, trying to emulate its mockery of those Hollywood types at their most devilish. Its humor and style, the eccentricities of its characters who lead each other on a merry dance, very much akin to those films, but it lacks their suaveness, their comedy, and their engaging plot – the lack of these are key to what drags the film down.

Charlie Waldo is the disgraced ex-cop now living in the wilderness, seeking solace after a tragic event bludgeoned his exciting career. His solitude is soon ruined by an old flame, and current private eye, Lorena (Morena Baccarin), who tries to recruit Waldo for a murder case involving the infamous star Alistair Pinch, who has been accused of killing his wife. And so, with Waldo’s name now attached (unwillingly might I add) to the case, he begins to attract attention from all the wrong names: wannabe gangsters and former colleagues, all of whom wish for Waldo to stick to his home in the woods – and if people stop attacking him then he might just do that.

Waldo returns to the famed streets of Hollywood after a long bike journey (a journey we see one too many times), where he is thrown into the hornet’s nest of drink, corruption, violence, and seemingly innocent teachers and their strange shaving fetishes – is this the sexy angle they were hoping for? The multitude of characters are shaped by a respectable cast that includes: Lucy Fry as the lustful teacher, Rupert Friend as the fiendish Hollywood producer, and there are even cameos from Method Man and Clancy Brown. But it is the presence of Hunnam and Gibson that carries the film along, with the two men having the most comedic scenes together.

And obviously, the many paths of accusation lead to a twist in the investigation, and like all mystery cop dramas, there is a rousing revealing speech at the end that tidies everything up. It wouldn’t be a mystery film without a bombshell now would it? One of the issues it has  is down to its muddled plot, and the pacing is all over the place; extremely repetitive and it often meanders down the same Hollywood boulevard in which it is set. With Tim Kirkby directing (known for his fabulous work on Fleabag and Veep), the comedy should stand tall above all else, and apart from a handful of moments, and the relationship between its two stars, it falls short on the one category it should excel at.

Last Looks really is just a mediocre, mystery riddled crime caper, full of the usual cliches of stylish cops, a lavish setting, flamboyant gangsters, and an attempt at sex appeal. It does succeed at producing certain moments of flash and glamour, and an unruly need at forcing that one last joke, with some of them hitting the mark, and some being left in the wilderness from where our protagonist has been lured away from. And although the film is quirky, and tries to break the mold of your typical cop story, it just doesn’t have the legs required to leave a lasting impression. But it is decent enough to get a couple of cheap laughs, and if not for that, then it’s worth watching just for Mel Gibson’s beard and eccentric British accent, so there is that at least.