Movie Review: Kubo and the Two Strings depict the power of memory 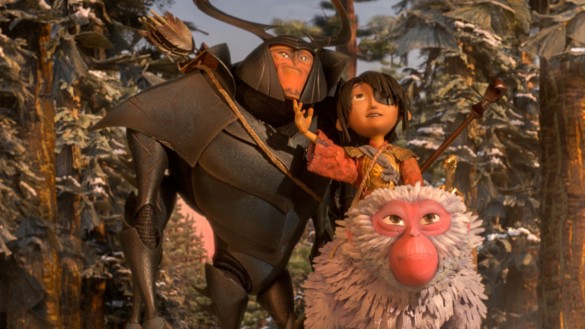 Synopsis: A young boy named Kubo must locate a magical suit of armor worn by his late father in order to defeat a vengeful spirit from the past.

Laika studios may not have a deep resume but so far it’s very respectable. Coraline is a really good film from 2009, followed by ParaNorman and The Boxtrolls, which are slightly inferior but still good in their own right. And now here we are with Kubo in the Two Strings, which is their best film so far. In fact, I’d go as far as to say that Kubo in the Two Strings is one of the best films we’ve seen in 2016, period. The film is bursting with a pathos that lingers from the opening frame, coupled with Kubo‘s stunning visuals, making for one of the best experiences you’ll have this year.

Kubo (Art Parkinson) is a young boy taking care of this mother, who is slowly losing her memory. One day, after his aunts arrive and try to steal him away, Kubo’s mother sends him on a journey to locate a magical suit of armor that was worn by his late father. This magical suit is the only way to defeat his vengeful aunts and grandfather. With the help of a talking monkey (Charlize Theron), brought to life by his mother’s magic, Kubo begins his journey. They soon find the aid of Beetle (Matthew McConaughey), an ex-Samurai warrior who also suffers from memory loss after being cursed into his insect life-form. The three of them eventually learn secrets of who they actually are and that narrative is interwoven with such grace, wit and heart.

Marc Haimes and Chris Butler’s screenplay perfectly captures the heart of this story, but not without having a little joy along the way. They smartly inject humor that not only works well for these characters but also the narrative at large. The timing of it doesn’t always work but overall Haimes and Butler succeed in giving Kubo the needed fun that balances well with the film’s drama.

At the heart of that drama are these notions of memory and how they are used as a coping mechanism when we experience pain and suffering. It’s in these ideas where Haimes and Butler, and director Travis Knight, succeed the most. The way they are able to balance the surface level story, Kubo finding this armor, while expertly laying out these powerful themes of memory underneath is quite extraordinary. Additionally, those ideas tie provocatively to the Japanese lore depicted in Kubo, which was a perfect vehicle to carry out this story. As a result, the film’s climax is poignant, visually captivating and is sure to satisfy both children and adults alike.

Charlize Theron and Matthew McConaughey are great supporting voices but it’s Art Parkinson who steals the show. Parkinson’s vocal performance as Kubo is really something else. He confidently illustrates this longing Kubo has for family as well as this desire to just be a kid. Kubo is mature beyond his years but he is also a vulnerable young soul who longs for parental love. You feel every bit of that in Kubo and a big reason for that is Parkinson’s robust delivery. It is also why the film’s themes resonate so powerfully by the end.

Kubo and the Two Strings isn’t a film that relies on emotion, but rather it earns its affection by delivering a fun story that is engaging and moving in its demonstration of how family, and our memories of them, function when we need them the most. Memories sometimes fade but through storytelling, it keeps them alive as well as the people in them. It’s a powerful idea elevated by Dario Marianelli’s stirring score and the lush stop-motion animation provided by Laika studios. I cannot begin to reiterate enough how wonderful the visuals are in Kubo. It’s simply fantastic.

Hear our podcast review on Episode 183: