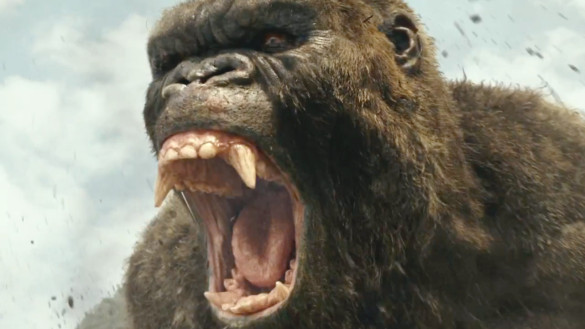 Synopsis: A team of scientists explore an uncharted island in the Pacific, venturing into the domain of the mighty Kong, and must fight to escape a primal Eden.

King Kong is ready to take on Godzilla in 2020, but before that, he needs his own solo film because that is in the connected universe guidebook by Disney that Warner Bros is following. Kong: Skull Island is a new story for Kong, there are no T-Rex battles or any empire state building tropes employed here. In fact, this time around Kong does not even leave Skull Island. I was excited for this movie because I am a huge fan of Kong and I wanted to see how director Jordan Vogt-Roberts would handle the spotlight after the breakout indie film The Kings of Summer.

Taking place in the 1970’s, a group consisting of scientists and soldiers travel to the mysterious Skull Island under the premise that they are there to map out the island. As soon as they start dropping seismic bombs, they awake the massive Kong, who quickly grounds the team after taking out several helicopters.

One of the complaints this film has been receiving revolve around how dull characters, but overall the characters did what they were supposed to do. There are three different types of characters, 1) redshirts 2) minor characters who have names who are still expendable and 3) the main characters. The main protagonists here are James Conrad (Tom Hiddleston) and Mason Weaver (Brie Larson). Conrad is a tracker and is supposed to have excellent survival skills and Weaver is a photographer. The issues I have with our two main leads is that they are pretty awful at the jobs they were recruited for, but they were still serviceable and were given enough to keep me engaged in the moments when Kong was not on screen. Outside of Jaws and Jurassic Park, the human characters in these types of monster movies are usually thin, and Kong: Skull Island is no different. The cast is A-List so that helps with having likable characters.

Looking at the aesthetics of the film, I stand by my declaration that Vogt-Roberts has what it takes to be one of the big names out there because he gives us a nice looking film with so many different various camera shots that help gives us perspective. As a Kong fan, I noticed several sequences that are an exact homage to the older Kong films and I like how we get a bit of a nostalgic feeling mixed in with this new story. The creatures are nicely designed, as is the entire Skull Island so this needs to be seen in the best format possible so that you are fully immersed in the story.

Since you are coming for Kong, let’s end with the big guy. Kong is 100 ft and growing and every time he is on the screen, he is easily the best part of the movie. Kong’s design is similar to the original 1933 version. Kong walks on two-legs, the last time Kong did that was in the 1976 version. The action scenes are fantastic here, but no fight can compare to the 2005 Peter Jackson’s T-rex battle, because here we missing the emotional buildup that the 2005 version had – which paid off wonderfully by the end.

I came out of Kong: Skull Island with exactly what I wanted to get out of it, and I am curious to see how this whole Monsterverse will play out. In the end, although it has issues, Kong is a great visionary experience and gives us a new take on Kong while keeping certain elements of his history in tack. The characters do a solid enough job to keep the story moving.

Hear our podcast review on Episode 212: