Movie Review (LFF): ‘Kajillionaire’ is a Peculiar and Delightful Surprise 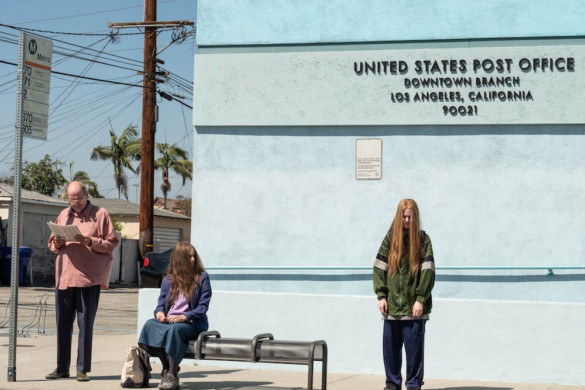 Synopsis: A young woman’s life changes when her criminal parents invite a peculiar woman into their devious schemes.

Every now and again, a film you don’t expect much from will often spring out a surprise or two, engaging you a world you didn’t think you’d find yourself so fascinated by. This is the case with Kajillionaire, a story about a family of con artists that surprises at every corner and delights thanks to a wealth of complex characters and great performances.

Robert (Richard Jenkins) and Theresa (Debra Winger) are a pair of con artists who have raised their child Old Dolio (Evan Rachel Wood) the arts of scheming and forgery (“She learned to forge before she learned to write”) and spend their days raising as much money as possible in order to continue paying rent. They don’t even pay for their shopping, with Old Dolio knowing exactly which aisles have cameras and which do not (the odd-numbered are good for stealing). When performing their most elaborate scheme yet at an airport, the family meets Melanie (Gina Rodriguez) who is soon trusted enough to become involved with their mischievous ways and finds herself part of the group. From here, Kajillionaire becomes an unpredictable surprise, with twists coming at every corner and a bittersweet ending which concludes the story extremely well.

The film works because of how complex and interesting the characters are. Old Dolio is shy and reserved, starved of physical human contact and affection her whole life to the point where she calls out her parents for never calling her “Hun.” Wood is great here, with unique mannerisms and brilliant physical performance, especially when performing Old Dolio’s stealthy movements. What should be a completely unbelievable character has an enormous amount of heart and empathy, which is all down to her performance. Just as she did making a robot feel human in Westworld, Wood continues to prove she can make any role work.

Jenkins and Winger are hilarious throughout, particularly the former who seems to have an answer for everything even if the characters are wholly unlikeable by the end of the film. Jenkins is at his best with larger than life characters set in quirky stories (think Burn After Reading and The Shape of Water) and this is no exception. The relationship between Winger’s Theresa and Old Dolio is one of the film’s most complex, adding to the film’s humanity.

The star of the show however is Gina Rodriguez, who is fabulous from the second she first appears on the plane. Melanie takes an instant to the family, in particular Old Dolio where it’s clear early on that they have romantic feelings for each other. Given Old Dolio’s social awkwardness, she becomes uncomfortable at just how attracted she is to Melanie, but as the film progresses we see her come out of her shell. The performances from both women are splendid, and Rodriguez comes with so much charm and effortless charisma that it’s hard not to love her character. The relationship between the pair becomes the true heart of the story, which is a pleasant turn of events given where the film begins and where you think it might go.

Miranda July directs and writes the feature as she had done with her previous two – Me and You and Everyone We Know and The Future – and the consistent tone between direction and script is key to making Kajillionaire work. It takes a little while to warm to, with the beginning of the film particularly jarring when adapting to the world these characters live in, but once it gets going July’s talents are on full force. She deserves credit for the performances she gets out of her cast, as well as making the story unpredictable from the outset.

The balance between comedy and drama is handled mostly very well, with a couple of moments however where it feels disjointed. When dealing with Old Dolio’s issues with her parents in classes, the film feels significantly less entertaining despite the importance of these scenes to understanding the relationship she has with them. These scenes don’t feel necessary, especially when Wood, Jenkins, and Winger are already doing fabulous work in showing us the dynamic already.

The title of the film comes from a quote from Jenkins’ Robert about how people just want to be kajillionaires (that is a lot of zeros) and that’s an important point to remember throughout the film. While Old Dolio’s parents just want to be rich and have money to get by, that’s not the wants of her. She wants happiness, companionship, affection, and everything else that money can’t buy. She finds this with Melanie, which is what makes their relationship even sweeter and entertaining to watch. The film’s bittersweet conclusion cements this point, providing the stark contrast between the characters in the best possible way.

Overall, Kajillionaire is a very entertaining and peculiar story that involves fascinating complex characters and a great story. It starts a little slow and the balance between comedy and drama doesn’t always hit the mark, but the relationship between Old Dolio and Melanie is excellent to watch and the performances help elevate the film to a high standard.