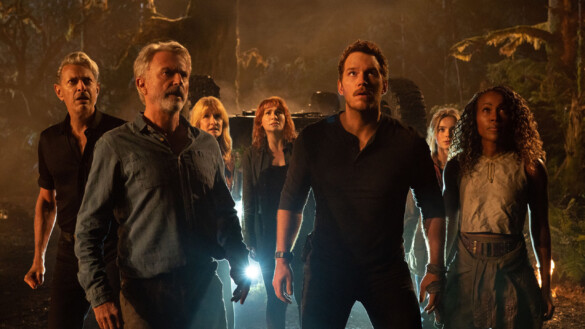 Synopsis: Four years after the destruction of Isla Nublar, dinosaurs now live–and hunt–alongside humans all over the world. This fragile balance will reshape the future and determine, once and for all, whether human beings are to remain the apex predators on a planet they now share with history’s most fearsome creatures in a New Era.

Sequel trilogies have a reputation for being uninspired, and more times than not, they are unable to carry the magic, originality, and form of storytelling that made the original properties popular in the first place. As much as I do agree with that statement, I will admit that it’s challenging to create sequel films that cater well to veteran and new fans simultaneously. You can’t make a sequel too identical to what came before because you’ll get heckled for being unoriginal. And you can’t stray too far from the path or else you’ll lose your core audience. It’s a fine line that needs to be drawn for both parties (veterans and newcomers) and some films have this foresight, such as Top Gun: Maverick and Ghostbusters: Afterlife.  Both films were able to successfully pass the baton while keeping the core audience engaged. Sadly, Jurassic World Dominion does not succeed in this way.

I’ll be the first to admit it. I was looking forward to this film. I have always been a big fan of dinosaurs for as long as I can remember. The thought of these majestic creatures roaming the earth for around 165 million years is fascinating. I even prepped myself by watching the previous installments (Jurassic World and Jurassic World: The Lost Kingdom) before watching the conclusion of this trilogy and I wanted to give this Jurassic journey a chance. Unfortunately, I left this film feeling desensitized and fatigued. The main theme of this movie was cohabitation between humans and dinosaurs, with a few side plots involving the legacy characters of Ellie Sattler (Laura Dern), Alan Grant (Sam Neill), and Ian Malcolm (Jeff Goldblum), which I thought was a great touch. I adore it when actors come back to play iconic characters. Some might call it fan service, but when done properly, legacy characters can be influential role models for new characters and push the narrative in an organic way that fits into the franchise at hand. With that being said, I think Jurassic World Dominion falls short when it comes to its legacy characters. You’ll get some hilarious moments with Ian Malcolm and the old flame of love narrative with Ellie Sattler and Alan Grant . But outside of that, this movie doesn’t push their journeys to new territory. They have a few interactions with the newer members of the cast (Chris Pratt, Bryce Dallas Howard, and Isabella Sermon). But other than a few insightful moments, it feels as though they were brought back to put butts in seats.

The dinosaurs in the film have never looked better. I appreciate the use of computer-generated and practical effects when it came to the original rulers of the earth. The roar of a T-Rex still sends a terrifying wave down my spine, and the film does a great job of addressing how the world would respond to these prehistoric creatures if they did roam the earth in today’s time. I think this film shines the most when it comes to characters introduced in the new trilogy, Owen Grady (Chris Pratt), Claire Dearing (Bryce Dallas Howard) and Isabella Sermon (Maisie Lockwood). You can tell that the relationships this trio shares are organic, and shows the trials and tribulations that come with being a family. Bryce Dallas Howard steals the show with her performance and is perhaps the most well written character in the Jurassic World trilogy. Her chemistry with Chris Pratt always bleeds through on screen and it is a joy to watch her journey unfold.

Jurassic World Dominion is the perfect family outing film, even though it left me feeling desensitized and fatigued. I have always admired the sense of urgency and danger this franchise was able to bring to the table. Unfortunately this uninspired sequel has overstayed its welcome due to its overdrawn runtime. The return of the original trio is a welcomed sight, but their storylines felt more like side quests that rarely contributed to the conclusion of this trilogy. I wish the formula of the Jurassic movies would have changed, but it seems like we’ve been given the same situation with different characters time after time, and it never feels properly fleshed out.