Op-Ed: The Inevitability of the Legacyquel 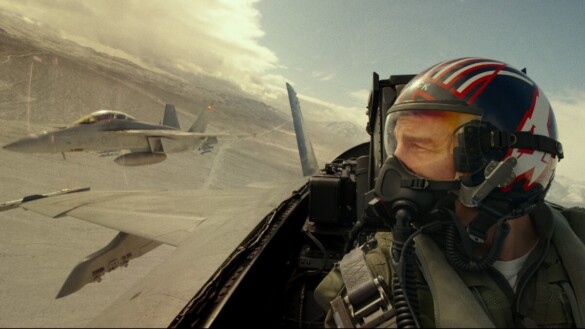 More people worldwide have spent money on seeing Top Gun: Maverick in a movie theater than the combined world grosses of Moonfall, Dog, The Lost City, Ambulance, The Northman, The Unbearable Weight of Massive Talent, and Everything Everywhere All at Once.* Even with the wonky math of not wanting to “take a chance on something,” that people use when choosing to go out to the movies, this is a staggering figure for a film with a 36 year gap from the original film to this sequel. We could easily imagine a world in which Top Gun: Maverick could have come to theaters with a groan and not a tearful welcome. In the universe where COVID-19 hadn’t ravaged the world, Top Gun: Maverick would have been directly competing with Pixar’s Soul and the bold, beautiful musical, In the Heights. It would have been competing with a still in theaters Wonder Woman 1984, F9 and likely No Time to Die, with Tenet ready and waiting to snatch away any fourth week promise.

Paramount delayed Top Gun: Maverick multiple times rather than shunting it to its streaming service. The studio kept the campaign alive and found a great, holiday weekend slot that followed up with a weekend without another major competing release. Paramount banked on the idea, and likely their own data from streams on their service, that the last two and a half years of people’s media consumption has been for comfort, for the familiar, for nostalgia and a simpler time. People have emerged from lockdowns, both self-imposed and mandated by authoritative bodies, with a new interest in old news. We went back to the theater and we saw new versions of Ghostbusters, The Matrix, Scream, and Tobey Maguire in a spider suit. We came out of our endless stream and found a new world filled with legacyquels.

Legacyquels are not a new concept even if we now have an eye-rollingly new portmanteau for them. They date back to at least the ’80s when, now king of the legacyquels, Tom Cruise took on Paul Newman in The Color of Money, a sequel to Newman’s slick pool hall drama of the ’60s, The Hustler. Though, if 2020 had proceeded as something of a normal year, it would have had more of them than in many of the previous years. As they all see the light of day at nearly the same time with Jurassic World: Dominion  following only two weeks after Top Gun: Maverick, we’re seeing that studios have found something new to exploit in us. Now they’ll not just snatch up intellectual properties, but mine their vaults for already existing intellectual property to reformat into a new legacyquel franchise. It’s likely that before too long, we may be staring down the barrel of summer with Back to the Future, Porky’s, Legally Blonde, and Police Academy stealing eyes from indie darlings and the latest Wickian action film.

The coming of more legacyquels is inevitable. It’s an avalanche we’ve all decided to take a selfie with rather than run away from and, if we’re to be buried, might we ask that we be buried under quality? Is it really so much to ask that these movies have something more to offer than familiar, albeit older, faces? What follows is what I require of future legacyquels if they’re to earn my trust and money. I hope you’ll agree it’s the least these studios can accomplish with the ungodly amounts of money and time they’re putting into these projects.

Do Right By The Original Actresses

I like Jennifer Connelly a lot, she’s a terrific, talented actress and a relatively age appropriate love interest for Tom Cruise. Though, the fact that there’s no mention of Kelly McGillis, the love she and Maverick shared, or the way she took his breath away is startling. Also, you make Rooster an orphan with one line about how his mother died years ago? You killed Meg Ryan off screen? MEG. RYAN. This is almost as bad as Blade Runner 2049 choosing to blow Rachael’s head off without her uttering a word. It’s great that filmmakers on these legacyquels are interested in creating new, meatier roles for women in these franchises. I’m glad for Robin Wright’s Lieutenant Joshi and Monica Barbaro’s Phoenix, but come on. If you’re making it more modern, giving a story more meaning, include those that, probably, suffered being underwritten or were archetypes rather than whole characters. At least in The Force Awakens, Leia is a general and in The Matrix Resurrections, Trinity evolves into a goddess. Do better.

One of the things that makes the Scream franchise so compelling is that it knows what it is. The characters in the film understand more about what’s going on and what may happen to them at any given moment than any character in most movies. The trick is making sure we don’t know what’s going to happen. My main criticism with most legacyquels is that they’re too predictable. You have to kill Han Solo. You have to have everyone on multiple Earths forget Peter Parker. You have to upend the status quo and move the narrative forward if this is going to become something else entirely and evolve beyond, “Hey remember how much you love that first movie, well…”

The Last Jedi is the perfect example of what a legacyquel can strive to be. The film pushes the ongoing story forward, builds in new ideas about old concepts, and shows us where the story could go if it moved a few more steps away from the past. It’s in the silly portmanteau that a legacyquel has a depth built into it. It has a text, a subtext, and a metatext; but that doesn’t mean it can’t be something that goes beyond everything that came before. It doesn’t mean that a filmmaker can’t create a great new story that exists in the same space as what came before it if they’re willing to add that history in only when necessary and not interrupt their entire narrative in order to make us gasp at a prop, place, or person from the original films. There are a lot of reasons I wish Solo had been better, but the top of that list is the over emphasis on a throwaway prop from the original film that is never mentioned or referenced as having any significance until this retconning of Han Solo’s story.

Legacyquels, shared universes, streaming service mini series spin offs for memorable characters; all of these things are coalescing into an endless cycle of distraction, nostalgia, and familiarity. I won’t get on my soapbox about how originality is dying or that films made only for adults are being shunted away from the theater experience. What I will say is that if we’re stuck with this for the next several years, just make them good, fresh, satisfying, and, for the love of all that’s holy, under two hours in length.