Movie Review: ‘Jungle Cruise’ is a family adventure through familiar, albeit shallow, waters 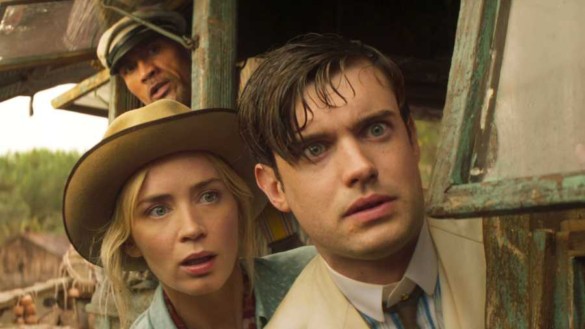 Synopsis: Based on Disneyland’s theme park ride where a small riverboat takes a group of travelers through a jungle filled with dangerous animals and reptiles but with a supernatural element.

Of all fiction literature, the action-adventure genre has a direct link to my heart that none other do. From films, books, and video games, my love for this genre can only be compared to the obsession of many of our favorite archeologists. And it is with a heavy heart that I inform you that Jungle Cruise is not an adventure worth watching.

Jungle Cruise, Disney’s latest journey into the action-adventure genre, is a film best left unthought about. Directed by Jaume Collet-Serra, the film follows siblings Lily and MacGregor Houghton as they search for the mythical tears of the moon believed to have the power to cure anything. Along the way, they run into Nazi generals, river tour guides, and cursed conquistadors protecting the jungle. However, even with the promise of a fun journey through the Amazon with the charming duo of Dwayne Johnson and Emily Blunt, Jungle Cruise fails to dive deeper than the surface of the shallow waters and leaves behind a forgettable experience.

Jungle Cruise is a film carried by the ever-so-charming duo of Dwayne “The Rock” Johnson and Emily Blunt. While their characters are only as deep as the Amazon itself, their personalities pull you into the film. Blunt plays Lily Houghton, a bright young lady that pushes the gender norms of the early 20th century, through her desire to wear trousers and go on adventures. Contrasting Lily, Johnson plays as Frank Wolff, a skipper for the local river tour, who seems to have more experience running cons rather than rapids. And while these characters are fun to watch throughout the film, with Frank’s corner puns being a favorite of mine, the chemistry between Johnson and Blunt is surprisingly missing. The sincere style of Blunt clashes with the wink-and-a-nod style of Johnson and leaves the impression that they worked on two separate films. However, it still can be a charming adventure enjoyed by all.

That accessibility is the other strength of Jungle Cruise. Unlike other stories in the genre, Jungle Cruise is made to be enjoyed by an audience of all ages. The Amazon is portrayed beautifully in the film, with vibrant colors and some great establishing shots. The transitions often utilize a hand-drawn effect that left me breathless and amazed, and that beauty will ensnare all ages, young and old. Along with this, the film doesn’t contain much of the swearing, scares, or violence that are often found in the genre, making it a great starting point for younger audiences.

However, beyond the charm of its leads, there is no temple of ornate riches to be found in this film.

Whereas adventurers like Indiana Jones, Lara Croft, or Nathan Drake often find themselves pulled into a journey that challenges the importance they place on finding lost artifacts, the adventurers of Disney’s Jungle Cruise are left without having to change their behaviors or beliefs. And the lack of any thematic depth at the center of this film left me wanting more from the film.

Jungle Cruise boasts a sizeable cast of characters, from the academics of London to the native tribe of the Jungle. However, many of these characters are used to solely move the plot along and have a habit of stealing screentime from the core characters of the film. MacGregor Houghton, Lily’s gay brother, is brought to life by Jack Whitehall but has little to do in the film. MacGregor is often relegated to being a gag, or a McGuffin, for the sprawling narrative. His one sequence with Frank has little to do with the story or the plot, instead used to explain why he came along with Lily despite his unenthused demeanor. As for Lily and Frank, much of their character development is rushed, as they begin to have feelings for the other at the end of the second act. It creates a screenplay that feels unbalanced, with an extended introduction to these characters and little time left for organic development to take place.

As for the extended supporting cast, each character has both too much and too little screen time to feel impactful to the greater story. Characters like Nilo, Prince Joachim, Aguire, and Trader Sam often work as obstacles for our lead characters, but each has little to do with one another and little impact on the narrative at large. Some of these characters are guides for our central characters, but they often arrive too late to add much to the story. Despite the eccentric acting of Jesse Plemons, Paul Giamatti, Veronica Falcón, and Edgar Ramírez, these characters fail to be memorable.

However, the action in an action-adventure film can be a saving grace. Unluckily for Jungle Cruise, the set pieces are less like a hard floor, and more like the spike pits in Square Enix Tomb Raider games. They don’t carry any weight. A large part of this is due to the editing and cinematography, by Joel Negron and Flavio Martínez Labiano respectively. The cutting is done rapidly, comprised of different angles, which leads to a watching experience that is jarring and tiring. Accompanying this is the cinematography of each action set piece, with each shot done entirely in close-ups. When combined together, it creates setpieces that are entirely forgettable, and unintentionally hilarious. These sequences have more in common with the work of Charlie Chaplin than that of Steven Spielberg, and it heavily impacts the tone of the film.

While the action-adventure genre has often used comedy to soften the intensity of its setpieces so that they can be enjoyed by all people, Jungle Cruise fails to balance the effect of the jokes with the stakes it sets up. Whereas the sarcasm of Nathan Drake heightens the intensity of any situation, the quippy puns of Jungle Cruise rarely work to increase the awareness of the stakes. And the visual effects of Jungle Cruise don’t help in establishing an intense tone either. Compared to the cursed pirates from Pirates of the Caribbean, the conquistadors are all poorly brought to life. And the animals in Jungle Cruise also don’t completely seem natural, which removed much of the terrifying nature of these beasts.

Taken as a whole, Jungle Cruise is a fun, but disappointing adventure. Like the myths that inspire each adventure, Jungle Cruise will be forgotten, due to the shallow characters, and mishandled action sequences.