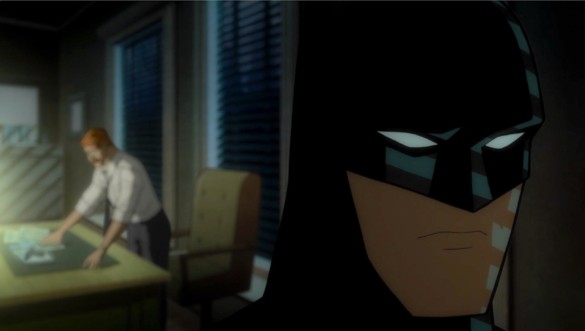 Synopsis: The killer known as Holiday continues to stalk the Falcone crime family while a new class of costumed criminals rises in Gotham City. Batman suspects that a former ally might be the serial killer.

As I covered part one of the most beloved graphic novels, I was starting to get worried because I couldn’t help but shake the fact the reveal of the killer Holiday would emerge to be lackluster. This experience stems from when the animated adaptation of Batman: Hush was released in 2019. I was eager to witness how Warner Bros. animation would tackle that story and unfortunately I was left dissatisfied. I understand that comic book adaptations are meant to mimic plots from the original material, but I wasn’t a fan of how they handled the narrative. Nevertheless Batman: The Long Halloween Part 2 has gone above and beyond the call of duty.

This film starts a few months after the jaw-dropping cliffhanger of part one and starts the ball rolling with a mind-twisted scene. Unlike Part one I was invested more so into the climax, reveal, and conclusion of the ladder half of the story. The stakes appear to have more weight as the story advanced. Part two balances the action and dialogue-heavy scenes successfully and like with every animated batman film, it is flooding with fan-favorite supervillains such as the joker, scarecrow, poison ivy, and the infamous two-face who plays a crucial role as foreshadowed in part one.

As much as I appreciate the story beats, the jury is still out about the art style they’ve chosen to move forward with current Dc animated films. In my part one review, I mentioned that the animation felt robotic and stiff and still hold to that. It reminds me of the animation style of the tv series Archer which is known for its bold outlined technique. It’s not a terrible route but during the dialogue-heavy sequences, you start to notice how out of place it looks for a superhero tale. I personally welcome the approach of amazon videos Invincible animated series, Young Justice, or that of Avatar: The Last Airbender (which definitely shows my age).

The action is where the new animation style shines. It blends well with the world of Gotham and is edited beautifully. It was easy to follow along with what was happening on screen. Even though I am not a fan of art style I believe that it will sit well with future DC animated projects. As I mentioned before stakes have more weight as the story advances, and this leads to a lot of hauntingly beautiful interactions between the characters and the big reveal of who the serial killer known as Holiday really is.

The adaptation of this story is so well crafted and brings the persona of the serial killer to life. This is the most engaging Batman film we have received since The Dark Knight Returns. The two halves of this tale are merged into one hell of a satisfying conclusion. One can hope that future DC animated projects follow this method moving forward.