Movie Review: ‘John Wick – Parabellum’ gloriously ups itself, one bullet at a time 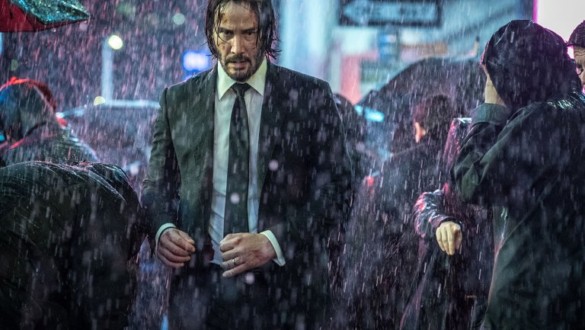 Synopsis: Super-assassin John Wick is on the run after killing a member of the international assassin’s guild, and with a $14 million price tag on his head – he is the target of hit men and women everywhere.

When a magician performs a successful magic trick, people feel astonished and shocked by what they just witnessed, completely not seeing it coming. Said magician now has the task of creating a new trick while keeping it in the vein of their style of magic. It’s not easy to continuously pull off new tricks and making them go over seamlessly, and yet that’s exactly what we are getting on screen from Chad Stahelski action franchise John Wick, starring the man he used to body double for on The Matrix franchise, Keanu Reeves. When they first introduced us to this franchise, they tricked us into believing this was nothing more than a joke of an action film. I mean come on, a man seeks revenge on the entire Russian mob because they killed the puppy his wife gave him. A film with that kind of premise is not supposed to be good, it’s comical bad. And yet, that film was one of the biggest surprises of 2015, and lead to a sequel in 2017 that elevated and topped the first one in terms of scale, action sequences and overall stakes in the story for our hero. So with the third chapter in this franchise, one must start to question if the magic trick that is this franchise would continue to amaze us or if it was time for a new act for the creators behind and in front of the camera? Well I’m here to say that this magic show is still in full bloom and has no signs of slowing down, and I was all in on this movie from the moment it started.

John Wick: Chapter Three – Parabellum starts shortly after the events of Chapter 2, where John Wick has been excommunicado and has a 14-million-dollar bounty on his head. His friend Winston (Ian McShane), who is the owner of the Continental Hotel in New York, gives him an hour head start, before he is casted out of the world they live in, run by the High Table, the organization that is in charge of the global assassin world that we have grown to love in these films. Within the first 30 minutes of the film, John is running away from assassins trying to kill him so he turns to his past, the place he was raised, to seek passage to reverse his status with the High Table, and go back to the life of peace that he left behind before the events of the first two films. While John is trying to save himself, an adjudicator (Asia Kate Dillon) for the High Table comes to New York to tell Winston and others that have helped Wick to either show their allegiance to the High Table or get their affairs in order and leave the city. Through action pieces and globe-trotting around the world for his life, Wick’s story and the story in New York collide for an all-out war that is one for the ages.

The story of the film is exactly what you expect after the events of the previous films, with Wick moving from place to place, showing off his skills and just why he is the most unstoppable force in the world. But in this film, unlike the last, he needs help in the form of Sofia (Halle Berry) to help him not only get to his next destination but also fight of the hordes of enemies in their way. In the other films, he feels like the boogie man, in that no one can and will come close to laying a finger on him. In this film, we see that he is a step slower at times, and while his drive is still there, this shows that this character has been through a lot within these films and can’t do it forever. Plus, what I liked about the second film, and is elevated here is the sense that Wick is the hunted rather than being the hunted. In the beginning of the film you can sense that he is surviving more than he is being “John Wick” but in the second half of the film, you can since that he is back and there to serve a purpose in fighting for what is his, and it’s a true spectacle to see.

The action in this film is on another level and you will be hard pressed to find better action in a film this year. The trailer for the film gives some of the best moments away in glimpses of what we see in the film, with Wick throwing knives to killing people with horses to an elaborate ending involving a glass room that is dangerous and beautiful all at the same time. It is another ball game experiencing it all on screen within the moment of the film, especially the scenes with Sofia and her two dogs. And while the scene does go on for a long time, you can’t help but feel by the end of it that you want to see more faceless thugs get killed at the hands of these two trained assassins and the most lethal animals in cinema this decade. Both Reeves and Berry are the shining lights in this third installment. Reeves is always good in the titular role of Wick, playing all the levels of emotions just within his fighting style as well as throughout the rest of the film in his struggle to get back his normal life. Reeves, along with Tom Cruise in the Mission: Impossible franchise, continue to give the best performances for a continuing character in big budget films. But in this film, Berry gives Reeves a run for his money with Sofia, an assassin that was forced to make a choice about her daughter a long time again and needed Wick’s help to get her out and now has to face the ramifications of owing John Wick a favor. There is a moment where she is almost forced to give up her dog and it is some of the best acting in Berry’s career as well as some of the best acting in the franchise. If she doesn’t come back in the next chapter or get a spin off film, then we are not doing her justice because she is that good in this movie.

I liked a lot of the film, and do even admire its over stuffiness at times, and left curious by the choices made at the end of the film based on where it leaves the characters for Chapter 4. Chapter 2 does a beautiful job of setting up the events of this film, and while I’m going to be there opening weekend for sure for the next one, the ending of Chapter 3 left me puzzled as to where Stahelski and his team pick up this story and continue the legend that is John Wick. But that is the beauty of a magic trick, to leave the audience guessing and coming back for more, and that is exactly what they are doing and why I can wait to see the Baba Yaga’s story continue and see if it continues to be as consistent of a franchise as you will find today.

Hear our podcast review on Episode 326: