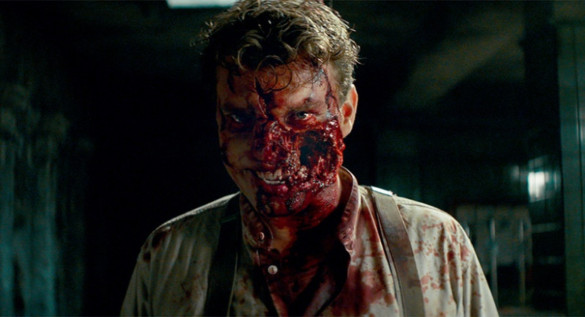 Synopsis: A small group of American soldiers find horror behind enemy lines on the eve of D-Day.

When I first heard rumors about Overlord, a new film from Julius Avery and produced by JJ Abrams, I was fairly excited. The film was initially rumored as a new piece to the Cloverfield universe which gave it a lot of attention. However, later a statement was released quelling those rumors and confirming that Overlord would indeed be a standalone film in no way be connected to Cloverfield. But by then the film had already captured my interest and I was still looking forward to a late night viewing. Mid-2018 the first trailer released and like most others, it heightened my excitement. The trailer looked like a wild chaotic ride of horror and fast-paced action. Unfortunately, though the film failed to capture the adrenaline rush I felt the trailer promised.

Overlord jumps off just how I imagined, a build-up of pulse-pounding tension that just explodes off the screen. It was a great start and I buckled up for the next 90 minutes. But immediately after this fast-paced opening, the film comes to a crawl and pretty much remains this way until the last 20 minutes. There is still some tension but very little action. This is my biggest gripe with Overlord, the pacing. Again referencing back to the trailer I had an expectation that this movie would be go-go-go with a lull here and there but instead, we got the opposite. This wouldn’t be a bad thing as there are plenty of great films that fit this profile, however, what Overlord doesn’t do well is fill in the gaps where the action is now void. If we are going to spend a lot more time alone with the characters I would expect a certain amount of backstory and character development. But aside from a few exceptions, we are given very little in regards to who these people are.

Don’t get me wrong, Overlord is not a bad film, the story is interesting and it will keep you engaged. The film does a good job of creating connections between the characters, there is an adorable bond between Tibbet (John Magaro) and a young boy Paul (Gianny Taufer), and enough is given for us to make sense of their actions. And outside of the science fiction aspect nothing in the film feels far-fetched, there are no “Why is he/she doing that?” moments that we find all too often in horror films. As a warning, there is a short scene involving a sexual assault that felt awkward and misplaced in the film. I felt like the scene could have been omitted or handled differently, as its only purpose is to move the story along and create tension between our heroes and the main antagonist. Aside from this though the film is an enjoyable experience with some decent performances.

I wasn’t familiar with any of Jovan Adepo’s work prior to Overlord but I found his performance as Boyce, the main character and audience surrogate, very satisfying however it is Mathilde Ollivier stole the spotlight. Her war-hardened no bullshit taking Chloe was a pleasure to watch and was the only character to really pop on-screen. In a film where character outlines really remained as sketches, Chloe is the only one we truly get a real feel for. We get a quick 30-second monologue from Boyce about his life prior to the war but that’s it, the remaining bulk of his time is spent scrambling about and appearing lost in the chaos going on around him. With Chloe through storytelling and some of her actions, we learn a little more about what is important to her and her place in the war. As a side note, Ollivier’s face seemed incredibly familiar but I couldn’t place from where and when. I browsed through her IMDB and was surprised to find Overlord was only her second full-length film. However, there are three other pending projects one titled “Untitled Female Driven WW II Spy Thriller” which just sounds exhilarating and I am looking forward to seeing more from her.

Overlord is a good movie but had potential to be much better and definitely more fun. If the film had better-implemented action and more monsters/mutants I would have probably been able to see past its shortcomings and just enjoy it as a popcorn flick. However, with the approach taken, we should have seen more in-depth characters and a stronger script. The final act although containing most of the meat also veered off towards campy sci-fi with a tacky and quite predictable villain. Overall ‘predictable’ is the best description for Overlord. Although it kept me entertained there was no point in time where the film really wowed me. The film is too safe in its execution and I feel like it could have really brought something to the screen we hadn’t seen in a long time. Instead, I spent the hour and a half just watching everything play out and by the time the credits were rolling I thought, “Cool.” and then left the theater. The film is worth the price of admission but if you can catch it at matinée pricing that would be ideal, just be sure to ignore the tone of the trailer going in or you might find yourself a little disappointed.