Featured: The Pains And Gains Of Martyrdom in Steve McQueen’s ‘Hunger’ 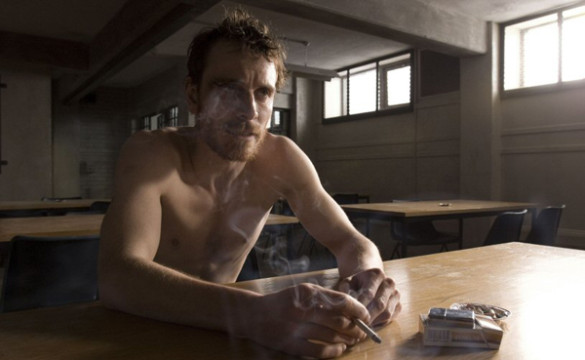 In honor of Steve McQueen’s upcoming Widows, his first feature since his Best Picture-winning 12 Years A Slave, it is time I’d write something a little more contemporary. It has been 10 years since he debuted his first full-length feature and, despite the power and brutality of his last two films, his first one, Hunger, is what struck me the hardest in terms of him as a visual filmmaker. The same goes for his lead actor, Michael Fassbinder, his editor, Joe Walker (Sicario, Arrival), and director of photography, Sean Bobbit (The Place Beyond The Pines, On Chesil Beach). What striking power we saw in his last two and we can expect in Widows all started 10 years ago and even beyond there.

Hunger is set around the 1981 H-Block Maze Prison dirty protest, where members of the Irish Republican Army (IRA) imprisoned began a no-wash protest, refusing to bathe and shave, wear no clothes rather than prison clothes, and smeared the entire cells with their own human waste. They demand to get back their status as a political prisoner which was revoked five years earlier and new UK Prime Minister, Margret Thatcher, took the hardline against the IRA. (“Crime is crime is crime, it is not political,” she said.) Bobby Sands, serving prison time for possession of firearms, was the commanding IRA officer in H-Block and decided to lead a hunger strike, willing to even die for his cause.

For the British and Irish, it is an event that is always remembered, mainly by those who were alive and haunted by images of the protest and reactions, as McQueen was. It made reverberations even in the US with the Irish-American population and murals of the protesters (spoiler alert: 10, including Sands, died; Thatcher responded by saying, “He chose to take his own life. It was a choice that his organization did not allow to many of its victims.”) It also started a push for the nationalist Sinn Fein party to rely on elections rather than have their paramilitary faction take over.

The Image Of A Shithole

McQueen came from a visual art background, mainly using still photography and avant-garde short films in his work. The techniques he utilized transferred over into his full movie making, keeping dialogue at a minimum, with the exception of the turning point in the second half where Sands decides to go on the fateful hunger strike. First, you see the extent of the resistance by the strikers and how harshly the guards and riot police go in to break it up. When a new prisoner enters his cell naked and with only a blanket to cover himself, he sees his cellmate already smearing the walls with his shit. Later, when everyone is taken out so the cells can be cleaned, one cleaner is bemused to see on the wall a rendition of a maze, making a symbolic path to how the prisoners need to escape but can’t find their way out.

The brutality of the guards is obvious. Nothing is said; they grab them one-by-one, hold them down in a tub while cleaning and shaving them. Later, McQueen goes 360 with his camera as the prisoners are beaten and probed grotesquely without cutting away. But the shots are not always making the guards vicious and barbarous in their sadist ways; one guard leaves and starts crying from the constant roughs of the job and another is seen at the very start exiting his home and looking under his car for a possible bomb, reinforcing the viewers of the paranoia the British faced by the IRA at the time this was happening. (The Troubles, as it was called, lasted from 1968 to 1998, ending with the signing of the Good Friday Agreement.)

The IRA was a predominately Catholic group fighting against the authoritarianism of a distrustful Protestant-based government. Murdering is not moral, but it is the only way they could make a statement in resisting the pressure by the British military. Killing one’s self is also not permitted, but when the backs are against the wall and one dares to challenge an authority like the new Prime Minister, the “Iron Lady,” as she was nicknamed, martyrdom by any means is the answer. The leads us to the most powerful, direct, and most talkative scene in the film. It is also one where nothing moves, yet it is the hardest scene a director could possibly film and challenges how long a take can be. With visual exposition comes Sands and a Catholic priest (played by Liam Cunningham) discussing, like a scene from an existential play, the value of human life.

It is 17 minutes long to be exact on a medium-shot of Sands and the priest talking at a table smoking cigarettes and building up to the most highly political moment in the film. It only breaks when Sands gives a fable of a story from his childhood to justify his decision to gamble his entire life for the sake of a free, united Ireland. The discussion of what life means is as strong as any of Robert Bresson’s fables, or the monologue by Michael Stuhlberg to his son in Call Me By Your Name, and even the deeply philosophical voiceovers said in The Thin Red Line. The pain Fassbinder has to physically show then courtesy of a 900 calorie diet he followed for months to get to same malnourished state as Sands in his last two months is explicit on the screen. Naked, weak, and covered with body sores, it becomes an excruciating reminder that this was a true story and that, as rough as political protests may get, this form is among the harshest in such a dismal chapter of The Troubles.

A Cinematic Portrait Of A Consequential History

This is McQueen’s masterful stroke of work of what he’s done so far and I can hope to see again this November with Widows. Moving from the biographically graphic to the suspenseful is quite the transition, but I suspect McQueen, based on the trailer has already invoked the dark, ominous tone that has been present from Hunger. It is more dialogue-based, but McQueen has not strayed away from the visually rich he prides himself in doing with long takes. Having seen Hunger at least half a dozen times, it is impossible not to notice how McQueen makes every inch of the frame his own canvas in coloring the bleakness of the cells and the violence that ripped thousands of citizens in the conflict. The pain feels real and the final shots, the final breaths of someone was willing to take, drive in Hunger and the meaning of it all.