Movie Review: Is The Spectacular Now really so spectacular? 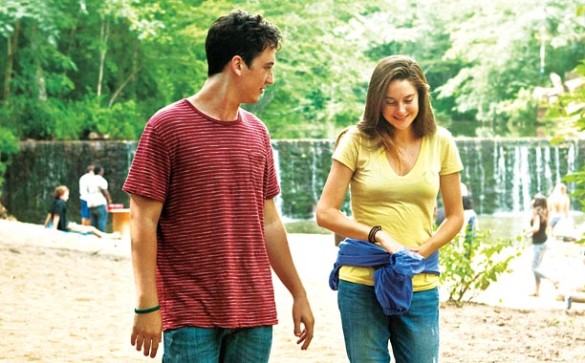 The Spectacular Now is the first film I’ve seen involving James Ponsoldt, but definitely will not be the last. With rising stars leading the way and a supporting cast of proven talent as well as a great story adapted from print for the screen by the duo who co-wrote (500) Days of Summer, this director had all the tools one would need to put together a great film. At the end of the day, Ponsoldt (like all directors) did succeed in making a somewhat familiar story feel fresh and new. Utilizing the talents of his cast and crew, the director creates a vision of a realistic high school drama featuring characters that are complex and memorable. Adding to that complexity is the fact that the film never seems to judge anyone too harshly, and lets both good and bad character traits be exposed in each character, letting the viewer decide where to fall on character judgments. This not only adds a level of intelligence to the movie, but respects the audience’s observational skills. The main thing I took away from this is that Ponsoldt needs to be added to the list of directors to keep an eye on. He definitely possesses a great talent for directing.

Although there are a few problematic lines of dialogue that I felt detracts from the overall tone of the film (especially in the first 20 minutes or so), the script was very solid. There were many lines being delivered that must have been cut straight from the book, which I felt came off strongly. The way that the story is told feels appropriate and none of the minor story arcs ever feel like they drag on too long or are being pushed upon us. The time we spend with characters and locations is just right, and that’s something that I feel the writers delivered on. The bookends of the story reminded me of “The Girl Next Door”, a similar story of a boy leaving high school and reflecting on what has happened in his life. Certainly there are times where you can recognize the writing style of Neustadter and Weber, but because of the adaptation from a novel it wasn’t entirely familiar.

Miles Teller seems to be one of these guys who audiences will either love or hate.  He has a certain aura surrounding him that feels somewhere between the personalities of a Justin Bieber and a Seth Rogen. On the one hand, he seems like a young guy who’s having a lot of success and his ego shows it, but on the other he seems to be self-aware of what his strengths and weaknesses are and delivers performances with confidence. I like him, and think he’ll develop into more of the Rogen type of guy in the long run. Still, he may not be everyone’s cup of tea. I suspect that is why some reviews of Spectacular are not as gracious as others. Shailene Woodley puts in one of the greatest performances I’ve seen in the last few years from a young lady, and rivals Emma Watson as possibly the “next big thing” in the same vein of a Jennifer Lawrence or Natalie Portman. She seems to be selective of her roles and studies them quite well.  Her laughs, smiles, and delivery methods are wildly impressive at times, and I can’t wait to see what’s in her future. Kyle Chandler and Jennifer Jason Leigh add veteran leadership and identity to the film, and are perfectly cast for their respective parts. A small part which added a great layer of reality to the film was that of the timid best friend of Teller’s character played by Masam Holden. I really enjoyed watching him, and alongside Woodley’s character, these two seemed like people I actually know and could identify with very quickly. Such a solid cast.

Rob Simonsen, composer of original music for Life of Pi, Moneyball, Little Miss Sunshine, and of course (500) Days of Summer was on board for this film too, adding to the familiar collaboration existing between the crew already. It was never anything that took my breath away, but it never disappeared either. I had no complaints, and felt the music was placed accordingly and helped the movie overall.